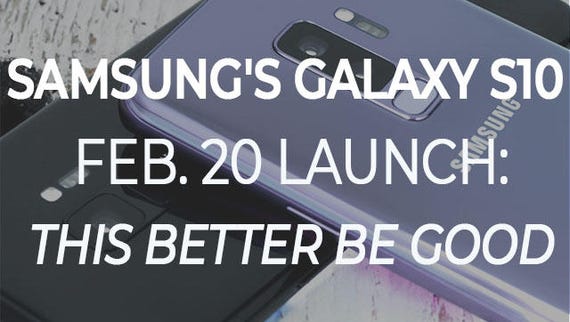 Samsung could be planning to launch three different models of the forthcoming Galaxy S10, according to leaked images.

Noted phone leaker Evan Blass posted an image showing off the back and front of what's believed to be the Galaxy S10 in three flavors, including the Galaxy S10E, S10, and S10 Plus.

Samsung is expected to launch the Galaxy S10 at its Unpacked event on February 20, when it may also unveil its first foldable phone. The leaked image of the three models line up with previous reports that this year's flagship would have three variants.

The Galaxy S10 is expected to be powered by Qualcomm's Snapdragon 855 chipset which, according to CNET's benchmarking tests, is about 45 percent faster than the Snapdragon 845 used in last year's Galaxy S9.

The Galaxy S10E is Samsung's answer to Apple's cheaper iPhone XR, and is expected to feature a 5.8-inch display and straight rather than curved edges on the S10 and S10 Plus.

The Galaxy S10 is tipped to have a 6.1-inch screen and possibly three cameras, while the larger S10+ could have a 6.8-inch display with up to four cameras on the rear and two front-facing cameras.

Samsung is also said to be launching a premium Galaxy S10 Plus with 12GB of RAM and 1TB storage that will feature a ceramic back cover that is scratch- and fall-resistant, according to phone leaker Ice universe.

The Galaxy S10 for the Korean market will be powered by Samsung's own Exynos 9820 chipset, which has shown up on benchmarking site Geekbench.

The report suggests that the entry-level model will come with 6GB of RAM. The Exynos 9820 had 4,382 single-core score and a 9,570 multi-core score, placing it well ahead of most Android phones.

Samsung to announce the Galaxy S10 on Feb. 20

The invite hints that we could see more than the S10 at the event.

Samsung Electronics has put up an outdoor ad in Paris that says in Korean the future will 'unfold' on February 20, strongly hinting at the launch of a foldable phone at the Galaxy S10 launch.

Samsung is working to make the Galaxy S10 everything to everybody, as trademark registrations indicate plans to develop a cryptocurrency wallet.