SAP outlined the details behind its CRM push, which is aimed squarely at Salesforce and its various clouds.
Written by Larry Dignan, Contributing Editor on June 5, 2018 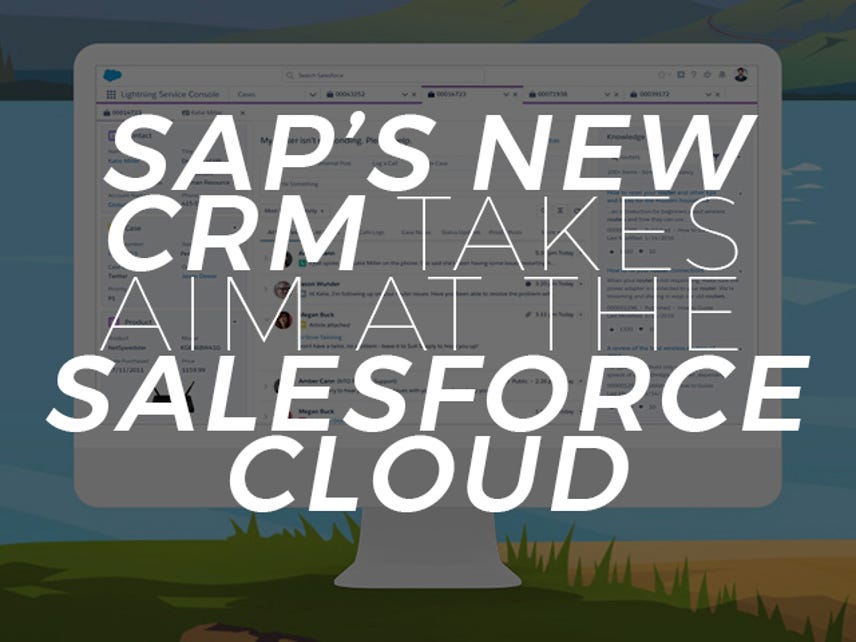 SAP is planning to take on Salesforce on multiple fronts as it aims to tie its back-end financial software to front-office and redefine customer relationship management. SAP has assembled the CRM parts and now the challenge will be putting them together.

And to add to its field service capabilities, SAP bought Coresystems, a Swiss company that uses AI and crowd sourcing to manage field service technicians. Coresystems will become part of SAP's Service Cloud.

McDermott cited the need to revamp "legacy CRM systems" that revolve around sales. What's notable about McDermott's phrase is that SAP -- along with Oracle's Siebel Systems -- were the legacy CRM apps upended by Salesforce. Now SAP is trying to paint Salesforce into a legacy corner.

SAP's CEO, who foreshadowed SAP's CRM plans on the company's most recent earnings call, noted the company "was the last to accept the status quo of CRM and is now first to change it. That's a guarantee."

The heady talk from McDermott when it came to CRM revolves around providing one view of the customer. By aligning and integrating SAP's core strength -- supply chain and financials on top of an in-memory database -- with CRM the company aims to differentiate. SAP's secret sauce will be machine learning, SAP Leonardo and integration with SAP S/4HANA, its ERP suite that has about 8,300 customers. Speaking during his keynote, McDermott said.

There is a direct correlation behind the size of the problems we solve and our existence and relevance. Our greatest validation is our customers success.

McDermott argued that CRM has to change. "We have moved from 360 degree view of sales automation where some companies focus to 360 degree view of the actual customer," said McDermott. The idea is that the supply chain and transactional data will be connected to the customer record and commerce in any channel on top of SAP Cloud Platform.

Here's the catch: Salesforce has already made big strides becoming that relationship operating system and continues to acquire and grow. Meanwhile, Salesforce's latest quarter highlights the strong demand the company is seeing.

According to Ray Wang, principal of Constellation Research, SAP has a CRM installed base due to bundling the application with its ERP tools. However, customers are also buying Salesforce even if SAP is running the financials and back office. The two CRM leaders in Wang's view are Salesforce and Microsoft in terms of users. Oracle also has a large installed base.

Add it up and SAP's CRM plans may be more about keeping itself in the loop with customers and gaining enough mind share with enterprises. SAP's Service Cloud is solid, said Wang. "SAP is saying that it is not ready to cede the market to Salesforce," he said. "SAP has a base there and there are Hybris commerce customers that may look to SAP for marketing."

SAP is also looking to shift the CRM conversation from managing sales to gaining productivity and return on investment.

What's unclear at this point is how SAP will be able to blend its various moving parts and technologies into a coherent suite. "Putting it all together will take a lot of work," said Wang. "SAP will have to get to a level of a common UI." He added that SAP's Fiori design language has turned out better than expected and can bridge gaps between the applications. Here's a screenshot:

To date, SAP's cloud strategy has been fairly straightforward: Acquire companies with installed bases and then cross-sell to bring down customer acquisition costs. Whether it's more recent purchases such as Callidus, Concur or Gigya or older ones like SuccessFactors or Ariba, SAP has mastered the cross-sell and wallet share momentum.

But if SAP is going to become a CRM player with a new customer-first e-commerce spin the company will have to branch out into playing small ball. SAP has historically been about large enterprise deals, but the software market is more direct and land and expand.

Today, customers and partners buy SAP applications and the back-and-fort with contracts, procurement and fulfillment can take weeks, explained Schulte. Adding 10 more users and an extension module goes through a similar process.

SAP.com is now aiming to handle those transactions. "We are establishing the digital channel and it won't be a parallel universe to field sales, but an augmentation," he said. "There will be channel parity."

As a result, the new SAP.com should facilitate more subscriptions over time. "This is also a cultural effort. In big deal scenarios, we don't rely on scalable no touch efforts. We need to think about trial to buy and retention. It's a land and expand way to think about it."

Schulte said that SAP is farther along than it initially thought it would be when the digital initiative launched. While the digital sales efforts may not be a direct fit with C/4HANA, the plan is worth noting. If SAP is really going to challenge Salesforce in CRM it is going to have to play small ball and get some folks to try out its software on the side.

Should SAP's C/4HANA really get traction it's likely to be with customers that have already standardized on S4/HANA ERP as a platform.

But first, those S4/HANA standardization efforts need to pick up. To that end, Accenture announced at SapphireNow that it has rolled S/4HANA out broadly to 15,000 users. According to Dan Kirner, Accenture's deputy CIO, S/4HANA was coupled with Microsoft Azure to support diverse units, add real-time analytics and financial reporting, integrating mergers and acquisitions and being able to add SAP's new technologies onto the S/4HANA base.

That last point is critical if C/4HANA is going to be a big success. Accenture, a key SAP systems integration and consulting partner, runs on SAP across the company. "The whole ERP market is moving that way (to a platform)," said Kirner. "We look at SAP as an overall suite whether it's finance, SuccessFactors, Ariba or Concur."

Accenture took a year to fully roll out S/4HANA and it's among the first companies of its size to complete an implementation on S/4HANA and Azure.

Those early S/4HANA customers are going to be an initial target customer base for C/4HANA. It remains to be seen whether SAP's CRM efforts expand beyond its installed base. The company, of course, is optimistic.

"We believe C/4HANA is very differentiated and in line with what modern enterprises are thinking of today when it comes to customer experiences," said Alex Atzberger, president of SAP Hybris. "We don't believe our customers have seen SAP as a CRM choice, but we're now going all-in on CRM again."