Those with drones that have a maximum takeoff weight of over 2 kilograms will be required to register them as they do for automobiles.
Written by Cho Mu-Hyun, Contributor on Feb. 17, 2020 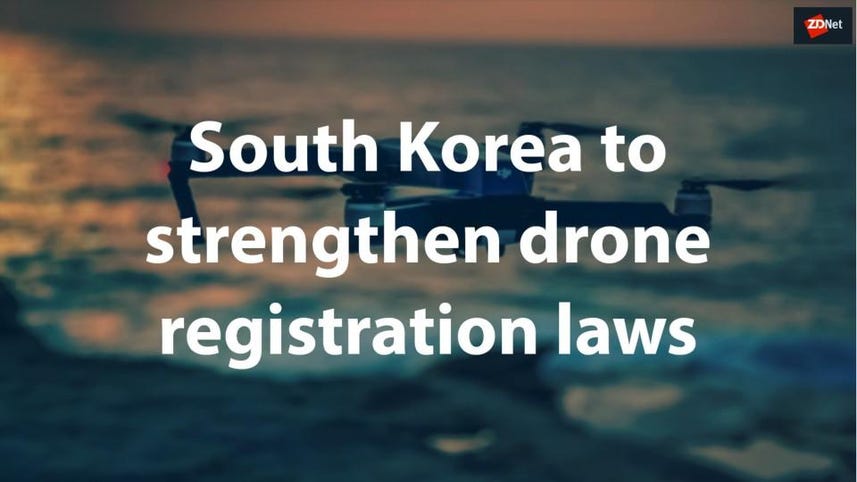 South Koreans who own drones that have a maximum takeoff weight of over 2 kilograms will need to register them as they do for cars starting from next year, the government has announced.

The new laws will be promulgated in May this year and come into effect on 1 January 2021, said the Ministry of Land, Infrastructure, and Transport.

Previously, drones that weighed less than 12 kilograms, excluding weight from fuel, were not required to be registered.

The ministry said the new laws reflect safety concerns that have arisen due to the increase in the number of drones as well as the increased capacity of the machines themselves.

Recently, there have been "hit and run" cases where unregistered drones would damage cars, with the owners of the drones nowhere to be found, the government said.

The registration process will be done simply, through the internet or a smartphone app, a ministry spokesman said. The new drone laws will be in line with countries such as the United States, China, Germany, and Australia where all drones weighing over 250 grams must be registered, he added.

The government will also require mandatory testing and licences for all drones weighing over 250 grams.

Previously, only those operating drones weighing over 12 kilograms, or "industrial drones", were required to have a licence.

For owners of drones weighing less than 2 kilograms but more than 250 grams, the new laws will require these people to take an online course. Meanwhile, those who operate drones weighing between 2 kilograms to 7 kilograms will need to pass an additional written test and have 6 hours of flight experience.

UPS on Wednesday announced a series of new initiatives and partnerships, all aimed at upgrading its global logistics network

Effective immediately, it will only be used in emergency situations.

Drones are currently heavily regulated to be far from populated areas. The "Mavic Mini," a drone weighing under 250 grams, from drone king DJI, gives a little window into a future in which the devices might be allowed to fly more freely in populated areas.

Driverless cars are the world's most prominent example of AI and robotics in action. But driverless trucks, semis, delivery vehicles, and drones are poised to unleash a new level of automation in the ...

Business
Global 5G subscriptions to exceed 1B by end-2022: Ericsson