It could be an alternative way to charge electronics such as mobile phones, tablets, and laptops.
Written by Aimee Chanthadavong on March 4, 2020 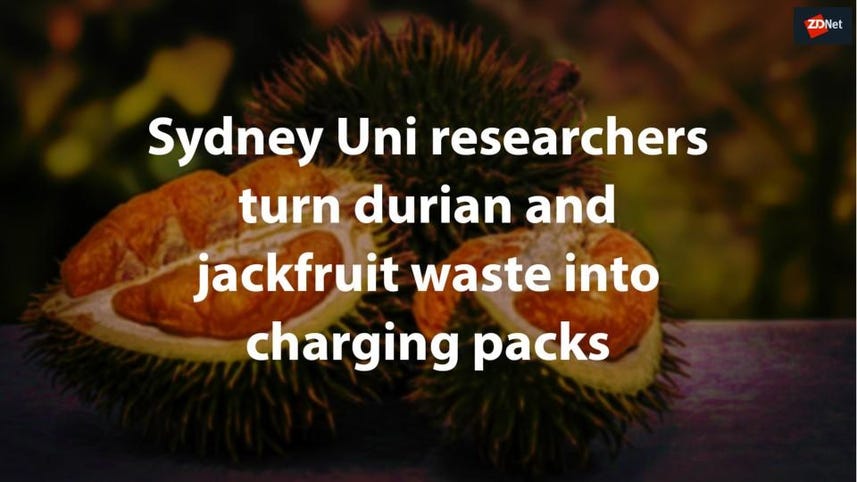 University of Sydney researchers have developed a method that shows how plants and fruits could potentially be used as an alternative energy source to quickly charge commonly used electronics, such as mobile phones, tablets, laptops, and even electric cars.

School of Chemical and Biomolecular Engineering academic associate professor Vincent Gomes explained how his team used a non-toxic method to convert the waste of durian and jackfruit into energy stores, known as supercapacitors.

"Using a non-toxic and non-hazardous green engineering method that used heating in water and freeze drying of the fruits' biomass, the durian and jackfruit were transformed into stable carbon aerogels -- an extremely light and porous synthetic material used for a range of applications," he said.

"Carbon aerogels make great supercapacitors because they are highly porous. We then used the fruit-derived aerogels to make electrodes which we tested for their energy storage properties, which we found to be exceptional."

According to Gomes, durian and jackfruit supercapacitors performed "much better than the materials currently in use and comparable, if not better, than the expensive and exotic graphene-based materials".

"Super-capacitors are like energy reservoirs that dole out energy smoothly. They can quickly store large amounts of energy within a small battery-sized device and then supply energy to charge electronic devices, such as mobile phones, tablets and laptops, within a few seconds," he said.

"Compared to batteries, super-capacitors are not only able to charge devices very quickly but also in orders of magnitude greater charging cycles than conventional devices. The current super-capacitors are made from activated carbon which are nowhere near as efficient as the ones prepared during this project."

He said the research revealed there are sustainable and alternative methods to creating low-cost energy.

"We have reached a point where we must urgently discover and produce ways to create and store energy using sustainably-sourced materials that do not contribute to global warming," he said.

"Confronted with this and the world's rapidly depleting supplies of fossil fuels, naturally-derived super-capacitors are leading the way for developing high-efficiency energy storage devices."

It will feature a supercomputer and data monitoring system.

The new investments and promises come a day before employees from Google, Amazon and other tech companies stage a walkout to protest the industry's role in the climate crisis.


It will also develop a data hub to store all of the collected information in real time.

Using machine learning, a team of researchers from Stanford, MIT, and Toyota has cut battery-testing times by 15fold.