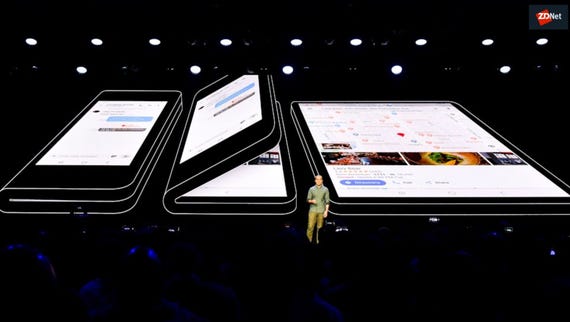 Now that Samsung's folding phone concept is out of the bag, or at least the breast pocket, it reveals some challenges about what's been perceived as the ultimate solution to balancing the needs of screen size and pocket fit.

First, there is the paradox of the front display. Because the Samsung phone must be opened to reveal its largest screen, the company has included another display on the front of the device for "quick access and interaction" -- tasks such as taking phone calls that do not benefit much from more display real estate. Samsung's narrower front display makes it less suitable for many Android apps. However, if Samsung were to make it, say, the size of the screen on the Galaxy Note 9, that would greatly reduce the incentive to open the phone to use the more incrementally larger inner folding display.

To some extent, Samsung has anticipated this limitation. The phone's folding display can take over from its front display, with the same app state being preserved. At the phone prototype's debut, Google announced that it would make changes to Android to facilitate how apps transition when resolutions are switched on the fly as in this scenario. Still, assuming most interactions will start with the phone in its folded state, this seems to acknowledge a burden on the consumer: Am I currently working on a task where it is worth my while to open the phone?

And that brings up the second folding phone paradox: Now that phones can stretch to the size of tablets (at least in terms of diagonal screen size), how does that affect the ergonomics of using it, particularly in one hand. Again, Samsung tipped its hand regarding this potential issue through its presentation of its OneUI, which always strives to keep controls at the bottom of the screen in easy reach of the thumb. Such an approach would surely benefit Samsung's tall phones today, but it could be particularly useful in a phone that challenged one-handed use both horizontally and vertically.

Indeed, not long after tall display aspect ratios have made phablets easier to grip, the width of a folding phone could force more tenuous approaches to holding. It might be better to dispense with the idea of maintaining the handheld scenario entirely and fold out to something that offers a larger tablet experience, perhaps with a wallet-like tri-fold display.

Samsung appears poised to ramp up production of its foldable phone in the first half of next year. Such an approach has also been strongly linked to Huawei and Microsoft. But for all of its awkwardness, the phablet is the most formidable competitor to the folding phone. The latter's incremental real estate may not be enough to overcome the former's convenience and potentially better ergonomics.

The Samsung foldable phone is here (Wait, why do I want one?)

https://www.zdnet.com/article/samsungs-foldable-phone-is-here-wait-why-do-i-want-one/A tantalizing glimpse was all Samsung gave. It was still enough to make one ponder.

https://www.zdnet.com/article/samsungs-infinity-flex-display-key-foldable-phone-specs-revealed/Samsung wants its folding phone to have a long battery life.

Join Discussion for: The paradoxes of the folding phone