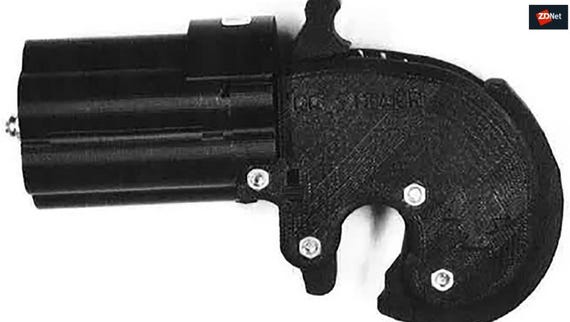 A 26-year-old student in the United Kingdom has become the first individual to be convicted after using a 3D printer to manufacture a gun.

Tendai Muswere, a student who lives in London, pleaded guilty to the charge of manufacturing a 3D printed gun at Southwark Crown Court on Wednesday, as reported by The Guardian.

Muswere's home was raided based on a separate drug warrant. When law enforcement searched the home, they discovered components belonging to a 3D printed gun on two separate occasions.

See also: The 3D printed gun that costs only $25

While the student claimed that he was not aware the weapon could be fired and the only reason the gun had been printed was for a university film project, police say that there is browser history evidence Muswere had watched online tutorials on how to create a 3D gun capable of firing live ammunition.

"This conviction, which I believe is the first of its kind relating to the use of a 3D printer to produce a firearm, has prevented a viable gun from getting into the hand[s] of criminals and is an excellent example of great partnership working between detectives, neighborhood police and our forensic colleagues," lead investigator Jonathan Roberts told the publication.

The case highlights what may one day become a serious issue on our streets. 3D printers have moved from the manufacturing realm to our homes, having become small and inexpensive enough for consumers, and now have democratized the creation of 3D objects -- but weapon blueprints are part of the mix.

TechRepublic: How AI-enhanced malware poses a threat to your organization

3D weapon component plans can be downloaded with relative ease online and it is often difficult for law enforcement to track or trace such objects, as they do not require registration numbers and their owners can acquire them without holding a firearms license.

The Lulz Liberator, for example, is a handheld gun which could be made for only $25.

Founded in 2012, Defense Distributed was once known as the main hub for 3D gun CAD blueprints. Started by Cody Wilson -- who later resigned as director of the company -- the repository was ordered to close down and an injunction to prevent the spread of the 3D gun files was imposed.

However, despite the concerns surrounding printed weapons, creating a 3D printed gun is not plain sailing. Not every component of a gun can be manufactured purely through these means, and law enforcement in both the US and UK are attempting to crack down on the problem before it becomes widespread.