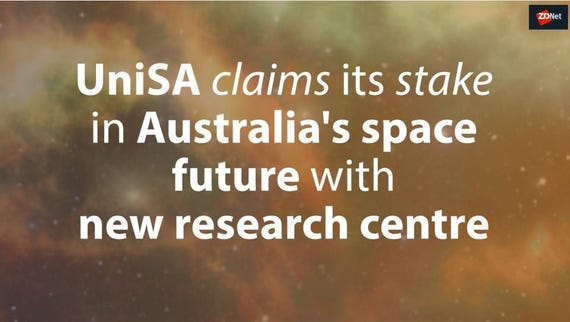 The University of South Australia (UniSA) has announced that it will be heading up a new Cooperative Research Centre for Smart Satellite Technologies and Analytics -- the SmartSat CRC.

The SmartSat CRC involves a AU$190 million investment from 84 research and industry partners, including the AU$55 million announced on Monday by the federal government.

According to the university and bid partner Nova Systems, the SmartSat CRC would be Australia's biggest space industry R&D investment, with UniSA Professor Andy Koronios saying that success in the space race has to be underpinned by "serious global investment in research".

"Australia has had a strong pedigree and a long history in space with excellent scientific capabilities in instrumentation and communications technologies, but until now, the research has not been brought together to build a new industry for Australia, and to capitalise on the exponential growth of the global space economy," he explained.

"Our goal in bringing together the bid for SmartSat was to show the huge potential and capacity there is in Australia to make an impact globally by developing leapfrogging technologies in areas where we have some of the best expertise on the planet -- AI, advanced communications, and remote sensing analytics."

Koronios said Australia could not rely exclusively on the goodwill of other nations or the country's "deep pockets" to meet its communications and connectivity needs, or to monitor the nation and its resources.

"For example, through their advanced remote sensing capabilities with satellites passing over Australia every day, other nations have the ability to predict our crop yields before we can," he continued. "As we advance at a pace to an era of machine-to-machine communications and the Internet of Things satellites are becoming central."

Although the new CRC will be headquartered in South Australia, it is a national program, and as Koronios explained, involves other universities, as well as the Commonwealth Scientific and Industrial Research Organisation (CSIRO), and the Defence Science and Technology (DST) group.

According to UniSA, the CRC will stand up state nodes in a bid to get the entire nation involved in the development of smart satellite technologies.

The new CRC is located nearby Australia's newly stood up space agency, which settled on South Australia as its home in December.

The Australian Space Agency, responsible for the whole-of-government coordination of civil space matters, just last week signed a Statement of Strategic Intent with global giant Boeing in a bid to help the agency grow the nation's space industry.

Other partnerships the agency has forged so far have been with France, Canada, the United Kingdom, the UAE, and partnership discussions have commenced with the United States and the European Space Agency. On the industry side, it has signed a similar Statement of Strategic Intent and Cooperation with Lockheed Martin Australia.

The agreements with Boeing and Lockheed Martin form the first phase of the space agency's plan to transform and grow Australia's space industry over the next 10 years, which was detailed in a roadmap released earlier this month.

Also this week, the University of Queensland (UQ) announced that students from its UQ Space team are making preparations to launch two rockets into the troposphere, each with an experimental payload -- a mechanical replica of the human cardiovascular system developed in collaboration with UQ Physics Club (PAIN), and a rocket live-telemetry system.

The rockets are 2,090mm and 2,650mm in length, respectively, and will travel fast enough to break the sound barrier, reaching maximum speeds of Mach 1 and Mach 2.25, UQ said.

The apparatus is being built using SLS-3D printing technology, and will use three columns to replicate the cardiovascular system, creating a flow of fluid after launch.

"UQ Space is less than a year old, so to have been able to develop two highly complex projects, and collaborate with such a diverse group of people has been incredible." UQ Space managing director and engineering student Myrthe Snoeks said.

The launch will be held at the Thunda Down Under 2019 Rocket Launch event, a few hours west of Brisbane, between 18 and 21 April 2019.