The United States and China are discussing a visit to Washington by Vice Premier Liu He, China's top negotiator for higher level trade talks this month.
Written by Chris Duckett on Jan. 10, 2019 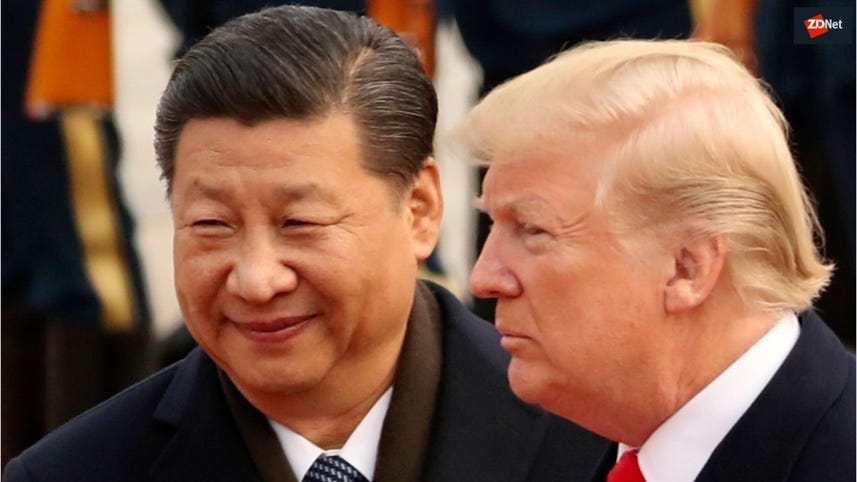 US and Chinese officials are working on arrangements for higher-level trade talks after mid-level officials this week discussed US demands for China to address issues such as intellectual property theft, forced technology transfers, and other non-tariff barriers.

People familiar with the three days of talks in Beijing said hopes are mounting that the top Chinese negotiator, Vice Premier Liu He, will visit Washington this month to meet with his negotiating counterparts, US Trade Representative Robert Lighthizer and Treasury Secretary Steven Mnuchin.

Talks at that level are viewed as important for making the key decisions to reach a deal that will ease a festering trade war between the world's two largest economies, which has roiled financial markets and disrupted trade flows for hundreds of billions of dollars-worth of goods.

The Beijing negotiations were "a stepping stone" toward higher-level talks, Myron Brilliant, the US Chamber of Commerce business lobbying group's head of international affairs, told reporters on Thursday.

"The idea is that Liu He will probably come to Washington. But the date is not set, in my understanding," said Brilliant, who is in regular contact with Trump administration officials.

"There is some question about whether it will happen before the Chinese New Year or right after," Brilliant said, adding that talks before the February 5 Lunar New Year would still allow for a final round of negotiations that will likely be needed before a March 2 deadline.

More than halfway through a 90-day truce in the US-China trade war agreed by President Trump and Chinese President Xi Jinping, there have been few concrete details of any real progress made.

Trump has vowed to increase tariffs on $200 billion-worth of Chinese imports on March 2 if China fails to take steps to protect US intellectual property, end policies that force American companies to turn over technology to Chinese partners, allow more market access for US businesses, and reduce other non-tariff barriers to American products.

China's commerce ministry said additional consultations with the US were being arranged after the Beijing talks addressed structural issues and helped establish a foundation to resolve US and Chinese concerns.

Asked about China's stance on issues such as forced technology transfers, intellectual property rights, non-tariff barriers and cyber attacks, and whether China was confident it could reach agreement with the United States, Gao said these issues were "an important part" of the Beijing talks.

"There has been progress in these areas," he said without elaborating.

Chinese officials listened "politely" to US grievances, they said, but responded by saying that while Americans had some issues wrong and misunderstood others, some other issues could be addressed.

"It was a cordial standoff," said one person familiar with the discussions. China has said it will not give ground on issues that it perceives as core.

US and Chinese officials made more progress on straightforward issues such as working out the details of Chinese pledges to buy a "substantial amount" of US agricultural, energy, and manufactured goods and services.

The White House kicked off the process of putting tariffs and investment restrictions on Chinese companies in March, with Trump stating an investigation by United States Trade Representative Robert Lighthizer concluded that China uses foreign ownership restrictions to require technology transfers from US companies to Chinese organisations, as well as conducting espionage to acquire intellectual property and confidential business information.

Additionally, the memorandum said China "directs and facilitates" investment and acquisitions of US companies for technology transfer purposes according to Beijing's plans, and lowers the ability of US companies to license technology to Chinese firms at proper market rates.

"We have a trade deficit, depending on the way you calculate, of $504 billion, now some people would say it is really $375 billion," Trump said at the time.

By June, both the United States and China levied tit-fot-tat tariffs on $34 billion worth of goods, and Trump made good on his pledge to escalate the trade war, directing Lighthizer to find another $200 billion worth of products to hit.

A month later, consumer goods companies including Apple and Fitbit had successfully argued that they should be exempted from tariffs.

Apple had said in a letter the US tariffs would affect prices for a "wide range" of Apple products, including its Watch.

"Our concern with these tariffs is that the US will be hardest hit, and that will result in lower US growth and competitiveness and higher prices for US consumers," Apple said in a letter.

"Tariffs increase the cost of our US operations, divert our resources, and disadvantage Apple compared to foreign competitors. More broadly, tariffs will lead to higher US consumer prices, lower overall US economic growth, and other unintended economic consequences. As a result, tariffs will ultimately reduce the economic benefit we generate for the United States."

In response, the American President took to Twitter to rail against Cupertino.

"Apple prices may increase because of the massive Tariffs we may be imposing on China - but there is an easy solution where there would be ZERO tax, and indeed a tax incentive. Make your products in the United States instead of China. Start building new plants now. Exciting! #MAGA," Trump wrote.

At the G20 meeting in November, Trump said iPhone buyers could handle a 10 percent cost increase.

"I can make it 10 percent, and people could stand that very easily," he said, before reiterating that company should build factories in the United States.

"They have to open up China to the United States. Otherwise, I don't see a deal being made. And if it's not made, we will be taking in billions and billions of dollars."

Since that time, Canada has arrested Huawei chief financial officer Meng Wanzhou in Vancouver on December 1, and China has held thirteen Canadians, with at least eight having been released.

The Huawei CFO, who is also the company founder's daughter, is accused by the United States of misleading multinational banks about Iran-linked transactions, which put the banks at risk of violating US sanctions. She was released on bail in Vancouver, where she owns two homes, while waiting to learn if she will be extradited to the United States. She is due in court on February 6, 2019.

Writing in The Hill Times this week, Chinese ambassador to Canada Lu Shaye said it appears some people believe Canadian nationals should be treated humanitarianly, while the Chinese should not.

"The reason why some people are used to arrogantly adopting double standards is due to Western egotism and white supremacy," he said. "In such a context, the rule of law is nothing but a tool for their political ends and a fig leaf for their practising hegemony in the international arena.

Lu said there was no evidence to the accusations that Huawei is controlled by Beijing.

"These same people have conveniently ignored the PRISM Program, Equation Group, and Echelon -- global spying networks operated by some countries that have been engaging in large-scale and organized cyber stealing, and spying and surveillance activities on foreign governments, enterprises, and individuals," Lu wrote.

"They shouted for a ban by the Five Eyes alliance countries (Australia, Canada, New Zealand, the United Kingdom, and the United States) on the use of Huawei equipment by these countries' own enterprises, which is literally a government-controlled action."

Annual reports on spectrum plans, a spectrum strategy task force, a long-term National Spectrum Strategy, and technology R&D efforts have been commanded under a new US presidential memorandum.

Arm's future in the datacenter is being solidified with Huawei introducing Arm powered server-class products, competing with Cavium, Qualcomm, and Amazon.

Overall, worldwide smartphone shipments declined in Q2 2018 in comparison to Q2 2017, according to IDC.