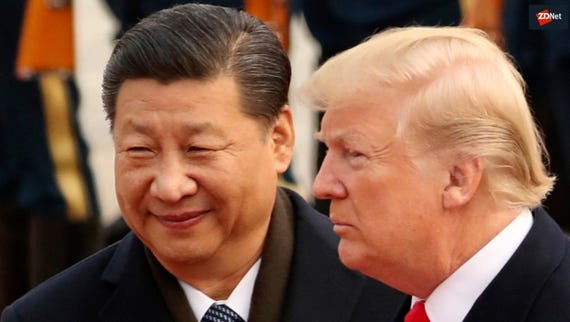 US President Donald Trump has told the Wall Street Journal that the US may proceed with new tariffs on consumer tech made in China, including the iPhone.

Trump is considering widening the tariffs on Chinese-made imports to the US, which could mean new duties on Apple products of between 10 and 25 percent.

Approximately half of all Chinese imports to the US have been subject to a 10 percent tariff since September, but if upcoming trade negotiations between the US and China don't work out, the tariffs could be expanded to all imported goods from China.

Additionally, existing US duties on Chinese imports are set to rise from 10 percent to 25 percent in January, affecting $200bn worth of imported goods.

Trump's threat of broader tariffs comes ahead of this week's G20 summit in Argentina where he's expected to meet with Chinese president Xi Jinping.

China aims to persuade the US not to impose the larger tariffs, but Trump said it was "highly unlikely" he would back down. Trump said the tariff could be anywhere between 10 and 25 percent.

Trump said the tariffs could impact Apple iPhones and laptops that were made in China, arguing that, "I can make it 10 percent, and people could stand that very easily."

Trump's advice to all businesses that manufacture is to "build factories in the United States and to make the product here".

As for China, the only "fair deal" would be for it to open the doors to US competition.

"They have to open up China to the United States. Otherwise, I don't see a deal being made. And if it's not made, we will be taking in billions and billions of dollars," said Trump.

Washington has kicked off the process of putting tariffs and investment restrictions on Chinese companies, while taking the Middle Kingdom to the World Trade Organization for dispute settlement.

Reports suggest that the US government and China are close to closing a deal which could help reverse ZTE's failing fortunes.

The first major casualty of the China-US trade war is getting 'back into business, fast' according to the president of the United States.

American officials are reportedly focusing on the cybersecurity risks of the Chinese telecom.