VMware in the span of seven days set its strategy to grab more multicloud deployments, positioned itself in case developers favor containers over virtual machines in the future and reiterated its case as a go-to enterprise engine for digital transformation.

CEO Pat Gelsinger summed up the strategy on the company's second quarter earnings conference call, which was dominated by the acquisitions of Pivotal and Carbon black, and then reiterated it at VMworld just a few days later.

Now VMware can clearly say we're uniquely positioned as the multicloud, hybrid cloud of choice. And customers are beginning to understand that. This idea of being able to tell customers that we enable you to take advantage of these enormous, rapidly evolving, globally available public cloud resources is a very powerful thing.

Yes, VMware has a partnership with Amazon Web Services as a preferred hybrid cloud choice. But Gelsinger also noted that VMware's integration with Microsoft Azure garnered customer interest quickly. The Azure-VMware tandem is designed to be a software defined data center using VMware Cloud Foundation and sold and supported by Microsoft Azure. Within two months, 20 customers including Gap have been onboarded.

Toss in joint software and services partnerships with Google Cloud, IBM and parent Dell Technologies and it's safe to say VMware has its bases covered. VMware's moves rhyme with what IBM is doing with its acquisition of Red Hat. The details differ on many key areas, but the end target is the same. Both IBM-Red Hat and VMware are going after multi-cloud deployments.

Perhaps the big question is whether VMware will spread itself too thin. Gelsinger told ZDNet that he wasn't concerned. In an interview with ZDNet, Gelsinger said:

If you look at what we've done over the last six-seven years, every move has been how do I take what I'm doing today and augment it with a capability that has a high adjacency to what we're doing. If you do adjacent moves, you have high probability of success; if you do very unadjacent moves, you have a low probability of success -- that's the whole thesis behind it.

Here are the themes from VMworld you need to know.

VMware's container strategy fits in with what the company has done historically: Embrace the new and extend it.

The company's purchase of Pivotal gives it a bevy of Cloud Foundry developers and a base to work in containers while embracing Kubernetes.

The transition to Kubernetes is underway, and the time to move decisively is now. With the acquisition of Pivotal, VMware will go from the best infrastructure software company to the best infrastructure and developer software company. We can now serve our customers from hypervisor to developer tooling as they embark on the journey to cloud and undertake the biggest modernization in history.

Analysts said the Pivotal purchase and the move to native Kubernetes is also a strategic hedge.

"Note that some believe that containers are a threat to VMW's core virtualization business, so this acquisition can also be seen as a hedge against any future disruption to VMW's core business," said FBN Securities analyst Shebly Seyrafi. "Pivotal has fully embraced Kubernetes with its recent launch of Pivotal Spring Runtime for Kubernetes and the upcoming Pivotal Application Service for Kubernetes."

While the technologies change, Gelsinger said at his VMworld keynote that the strategy of VMware remains consistent and focused on running multiple clouds in a diverse environment.

Our strategy is the same. We're marching to deliver any cloud, for any application, for any device with intrinsic security. We believe technologists who master the multi-cloud generation will own it for the next decade.

The VMware multi-cloud strategy obviously is built on what we've done together for several decades. We built a preferred partnership with Amazon. We've now expanded that to have all of the cloud and the hyperscalers in the industry, uniquely working with IBM and that relationship, the last several years. And now a couple of thousand customers. Just launching with Google, and Microsoft.

Gelsinger said that multicloud will bring a host of management challenges and that's why the company's CloudHealth lineup matters. He added that CloudHealth, which was acquired, is managing more than $10 billion in cloud spend and helping customers cut costs by 25% or more.

When coupled with VMware's other cloud platforms and management applications, the strategy becomes clear. VMware wants to be in the middle of all of your clouds.

VMware used VMworld and its earnings conference call to highlight its grand security plan. The general idea is that VMware is aiming to use Carbon Black and its other tools to secure infrastructure from the cloud to the end point. 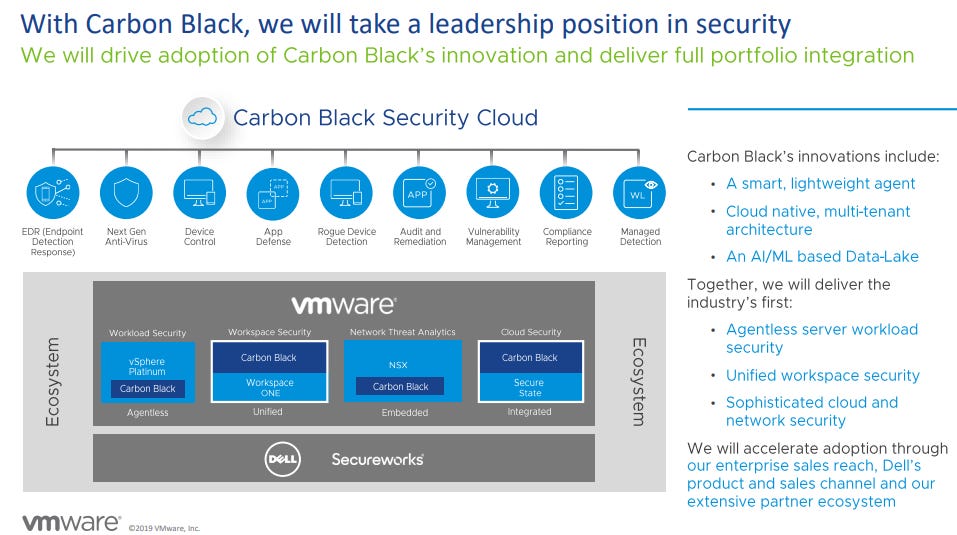 There are 5 key control points in security. It starts with a network. The second is the endpoint, but people think of the endpoint traditionally as just the client endpoint, devices. Now there's just as important workload endpoint, servers, containers, compute in the cloud. In fact, there are probably more endpoints long term. Number three is identity. Very important, especially given the breaches we've heard about in the last year or two. Number four, the cloud and the way the cloud works. And all of these four spits out the fifth area, which is a telemetry of data of all analytics. These are the 5 important control points that we believe will create an intrinsic security platform mapped into that any cloud, any app device world.

Will VMware be able to build this security platform? Analysts are mixed.

Jason Ader, an analyst at William Blair, said Carbon Black may seem curious, but VMware knew the company's technology well from previous integrations. "What remains to be seen is whether VMware backed the right horse in this race, and how successful VMware will be in integrating Carbon Black's technology into existing offerings like Secure State, NSX, Workspace ONE, and Airwatch," he said.