Wallet wars: How a Microsoft-Amazon-led alliance can strike back at Apple Card

A unified competitive response by the tech giants is required in order to counter the Apple Card from potentially monopolizing the future of the smart wallet and mobile payments industry.
Written by Jason Perlow, Senior Technology Editor on April 1, 2019 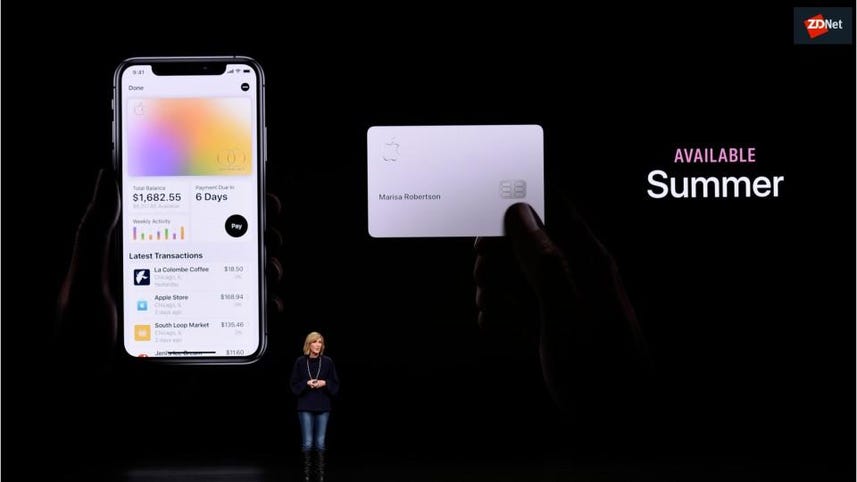 Last week, the Cupertino consumer electronics powerhouse unveiled Apple Card, which will move the company into the financial services space as an e-payments leader by further leveraging its Apple Pay NFC-based electronic wallet and mobile payments system, in partnership with banking firm Goldman Sachs and MasterCard.

MasterCard and Apple have been working closely together since 2014, when the partnership introduced further integration of its cards with increased security using tokenization into Apple Wallet and the Apple Pay service.

Apple is becoming a card issuer (and a bank)

Initial feedback from the press and analysts has been very strong: Apple is becoming a card issuer (and a bank) rather than being just a payments enabler; it's providing the value-added technology infrastructure for mobile payments, a solid rewards system with direct cash back payout into Apple Pay Cash, as well as the financial management features Apple Wallet will exclusively provide to Apple Card members.

Membership in Apple Card, it seems, does have its privileges. And it appears to already be resonating with consumers who are clicking and filling out email notification lists in droves with interest on Apple's website.

Apple's foray into this space almost certainly cannot go unanswered. The other tech giants -- Microsoft, Amazon, Google, and Samsung -- are obliged to counter this, as do MasterCard's rivals, Visa, and American Express.

The advantage Apple currently maintains is that it has about 1.4 billion devices as an active footprint, with about 900 million of those being iPhones. So, with Apple Card, it now owns the entire end to end of its financial ecosystem.

A fractured bunch of ankle biters

The other firms, with the exception of Samsung and Google, do not have their own mobile device ecosystems; they provide third-party software and services for both iOS and Android.

Google and Samsung have both entered the mobile payments space with Google Pay and Samsung Pay, respectively. But neither have enjoyed the degree of retail penetration that Apple Pay with payment processors has, such as with Verifone, Square, Global Payments, or First Data with its terminal equipment in the past four years or so.

The problem is that all the companies competing with Apple in this emerging space are now a fractured bunch of ankle biters.

What needs to happen: These bitter rivals must put their heads together and agree fundamentally on creating a single, non-Apple mobile payments standard, along with Visa and at least two or three other major financial institutions, such as JPMorgan Chase and Citicorp, which can enable their bank cards for this platform.

And, yes, American Express, which is both a card issuing bank and a processor, needs to start eating some humble pie and put its thinking cap on, as well.

However, for these companies to think about directly competing in the consumer mobile payments space, a me-too response is probably not the right approach.

Yes, they should standardize the transactions and the device communications protocol with the terminal equipment, and create a recognizable brand name behind it as well as a consortium. That is a bare minimum needed for a competing standard to be successful. But they need to do some things better than what Apple is offering with Apple Card and its enhanced Apple Wallet.

A rival alliance would need a business-first focus

Apple Card appears to be, for the moment, consumer-focused. Therefore, I believe the key differentiating value-add of a rival alliance -- right out of the gate -- should be a business-first focus that uses the enabling technologies of Microsoft, Amazon, and Google with their respective enterprise clouds.

Business-anything has always been Apple's achilles heel. And I don't think its alliance with IBM is going to help it raise the bar with Apple Card either, even if it leveraged IBM's Cloud and Watson. Have we really seen any fruit from the IBM partnership at all? Since it began in 2014, the partnership hasn't demonstrated anything of significant value to enterprises other than press release sound bites with staged Tim and Ginni photo ops.

Microsoft, as a mobile software developer for business, is the only player with the chops to write top-quality financial apps for both Android and iOS. It also has the best commercial cloud with machine learning and other services that would be needed to build intelligent dashboards for analyzing corporate as well as an individual customer's own spending habits.

Can you say mobile PowerBI on your corporate and personally enrolled credit cards? With integrated expense reporting with companies like SAP Concur? Cortana-based financial smart queries and AI-based virtual FAs? Yeah, I knew you could.

SAP's strategic partnership with Microsoft on Azure and other major technology initiatives, such as IoT, and its serious banking savvy shouldn't be discounted either. I see it as the key banking vertical partner heavy behind anything Microsoft puts forth in a potential alliance between these companies to thwart Apple.

Getting up to speed with MasterCard and Apple

Any and all major back-end infrastructure engineering efforts are going to be centered around those two companies, especially as it relates to getting Visa and American Express -- which seems to be virtually silent in this area short of attaching themselves to everyone's mobile wallet -- up to speed with MasterCard's efforts with Apple.

Apple cannot do what Azure and Office 365 and SAP's Leonardo can, not by a long shot. It isn't its area of expertise, and it doesn't want to be in that space.

Microsoft also owns the Microsoft Money trademark -- which could and should be resurrected for this purpose of creating a family of services around credit card and mobile payments.

And while Microsoft doesn't make devices anymore (other than Surface, HoloLens, and Xbox), it has excellent relationships with most of the Android device manufacturers, especially Samsung. I'm pretty sure Samsung could be convinced to drop Samsung Pay in favor of a unified Microsoft/Amazon/Google standard on its devices with a strong partnership commitment and other incentives.

Let's not underestimate Amazon's mobile software capabilities on Android and iOS either. Additionally, it already has a working relationship with JPMorgan Chase. Amazon Web Services is certainly no slouch in machine learning, and it owns and runs Alexa's core infrastructure.

As a Chase Manhattan Sapphire Reserve and an Amazon Prime Rewards Visa customer, I would love to see a unified Amazon wallet application -- one that works on both my Apple and Android devices, and that integrates the Chase Private Client and JP Morgan investment portfolio management functionality.

Chase's existing banking and card app and most of the other banking apps out there, such as Citibank's (which I use with Costco's card), are just awful. Amazon could bring a lot to the table, and, unlike Microsoft, it knows the elite consumer and points/loyalty space extremely well given its experience with Prime.

The question remains, where is Google in all of this? Getting Google to cooperate with Microsoft and Amazon on anything is going to be a challenge, because, historically, they don't play well with others. Potentially, they might go at this alone, with their own apps and services, perhaps with even their own card and banking partner, but it would behoove them to at least cooperate on a standardized transaction and NFC communications protocol for mobile payments.

So, where are the challenges?

Obviously, getting any of these companies to agree to jointly cooperate will be difficult, although the challenge is not unsurmountable given the size of the opportunity. (As the saying goes, the enemy of my enemy is my friend.) Amazon and Microsoft already partner on Alexa and Cortana interoperability; I think they can agree to compete on commercial clouds and still attack Apple together on financial. And Samsung along with others in the Android space  -- LG, Lenovo, Huawei -- would be happy to work with Amazon and Microsoft on a unified payments front.

While getting this all to work on Android would be academic, since it's a very open system that permits sideloading as well as alternative app stores, the real issue is going to be how these apps could potentially work on iOS.

From an API perspective, Apple could lock down aspects of NFC and the UX on the iPhone and Apple Watch, which could significantly impact ease of use -- as it is, the double click on the power button on iOS wakes up Apple Wallet for Apple Pay transactions, and a similar action on Watch OS does the same.

A competing wallet with NFC capabilities would likely have to be launched using the regular iOS and Apple Watch UXes, respectively.

For example, Apple's CarPlay in iOS 12 now allows for alternative navigation apps, but the voice recognition button on car steering wheels that support it still default to Siri. You can't use Google Assistant in Google Maps unless you touch a different virtual button in the CarPlay app itself, which works but is clunky.

Apple could, in a defensive measure, lock out all competing wallets from its platform completely -- something that also could get them in antitrust hot water, particular in the EU. So far, Google Pay exists on the App Store, but unlike the Android version, it doesn't have NFC functionality. It's strictly for online and person-to-person transactions, like Apple Pay Cash, Square's Cash App, or PayPal.

Samsung Pay doesn't exist on iOS at all, because Apple rejected it from the App Store in December 2016. It's unclear as to why that is the case, and why Samsung did not attempt to resubmit, but it could very well have to do with the fact that -- had it been released -- it would have had NFC functionality, which would have allowed users to pay for goods in retail locations using their iPhones, just like Apple Pay.

If the Korean electronics giant were to partner with Microsoft and Amazon in a unified effort, I believe there is a significant possibility that Apple would act defensively and cut this alliance out. However, given how strategic a software developer Microsoft is for Apple in the business space on iOS and Mac OS, they might think twice about acting in such a retaliatory manner. Waging war against Samsung on a pure device competition level is one thing, but firing shells at a financial alliance led by Microsoft and Amazon --- both key enablers of Apple's software ecosystem -- would be extremely unwise.

Regardless of the potential difficulties that may arise, a competitive response to Apple Card has to be made, especially for business. Can Microsoft, Amazon, Google, and Samsung rise to the challenge with Visa and American Express? Talk Back and Let Me Know.

The 5 best military credit cards of 2022