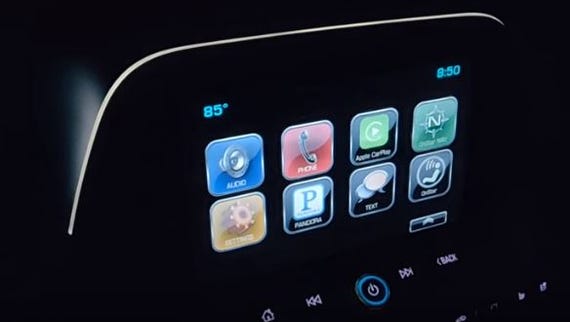 I gotta hand it to the folks over in Cupertino working on all this stuff. Not only have they saved my life in this calendar year, but it also looks like they've saved my marriage.

One of the things I love about late model GM vehicles is that they have Apple CarPlay (and Android Auto) built-in. They don't make you buy an expensive, difficult to upgrade proprietary navigation and audio system, such as on my wife's 2016 Infiniti Q50.

I find it ridiculous that Nissan can't figure out how to do this with a firmware update on such an expensive vehicle, and that I am probably stuck with their junky, slow, outdated GPS in that car because of the proprietary stack layout unless I shell out big bucks on a 3rd-party retrofitting kit. But I digress.

CarPlay is a cool piece of technology but ever since its introduction, it has had issues. It's great for integrating your music collection on your iPhone, and it allows you to use Apple Maps as your navigation system instead of said proprietary junk built into your car. But it couldn't do much else.

It was a great system in theory -- but unlike on the iPhone or even on the Apple Watch, it did not allow that many third-party developers to participate. It had much stricter rules than on the App Store.

The only GPS mapping system you could use was their own, Apple Maps, which has a less than stellar reputation.

I was fine using it in my car. It worked, most of the time. Maybe it didn't calculate the most optimal route, but in the end, I would get to where I was going.

But any time my wife got in the car with me, all bets were off. It was like cats and dogs.

Also: Meet the robot snakes and bugs that will repair your car's engine

First of all my wife is a control freak and hates the way I have the air conditioning set. I like it cold, like at 68, and she likes it at like 74 or higher. She changes the positioning of the AC vents. This is a problem inside and outside the car.

We battle each other with thermostats at home too. But she also messes with radio controls. I like loud music in the car, she doesn't.

I'm okay with that. After 23 years of marriage, you are able to look past a lot of things.

But mess with my navigation and tell me where to drive? Oh no.

We'd want to go somewhere, and if I was carrying my iPhone and not one of my Androids, the first thing she would do is whip out her iPhone 7 Plus and bring her Google Maps out.

I'd say "No, let's use the GPS on the screen." Then there would be the inevitable discussion of "But Apple Maps sucks, the route won't be as efficient, it will take longer, we're gonna be late," etc.

Then I'd reply that I was the one driving, and I need to be able to see the screen, that it's dangerous to stare down at the phone. Then she would say "Don't worry, I'll hold the phone, I'll tell you where to go." And then I would reply "That's unsafe, I'm not doing that, and I can't hear that stupid thing."

There would be bickering, raised voices, and red faces. And then we would be both extremely pissed off at each other by the time we got to where we were going.

On Monday, September 17, Apple released iOS 12. Which is a major update in a number of respects for currently supported generation iPhones (since the 5S). But the big announcement was that third-party navigation programs, such as Google Maps and Waze, would now be supported on CarPlay.

In response, Google updated their Maps application on iOS to version 5, so now when you hit the CarPlay button, in addition to Apple Maps, you get a Google Maps icon, and can use their navigation.

Thank you, Apple, again. My marriage is saved.

But CarPlay's third-party navigation support isn't perfect. As you will notice in the video above, using the voice activation button on the steering wheel still brings up Siri -- not Google's Assistant integrated into Google Maps.

So if you are driving, and need to change a destination while using Google Maps, you still need to touch the screen. Ugh.

Also: Why Apple should fire Siri and hire Cortana

I understand why Apple wants Siri to be the default intelligent assistant for the iPhone and might not want to allow Google Assistant, Alexa or Cortana to be used as primary. I get it. But it's dangerous to have to fiddle with the screen in your car. And in some states, it is actually illegal to do that.

At least while you are driving, that button should be tied to whatever the default selected navigation program is. Or Siri needs to be able to hand off queries to the local agent in the navigation app -- such as the way you can invoke Cortana from Alexa devices now.

There doesn't appear to be a way to do that yet.

Believe me, I am beyond ecstatic that Google Maps now works in my car. It's going to bring so much joy and peace into my life. But Apple, my friend, you can do better with the third-party app integration than with this first attempt.

How excited are you that third-party navigation apps now work in CarPlay? Talk Back and Let Me Know.

Your guide to the touchscreens, connectivity options and other infotainment tech features in every new model.

Google is working with Renault, Nissan and Mitsubishi on infotainment systems

For Ford's developer ecosystem, the rubber is about to hit the road

After spending five years building an automotive developer ecosystem, Ford is about to see its open source SmartDeviceLink platform put to the test.

Join Discussion for: iOS 12 CarPlay saved my marriage with Google...