We live in an age of miracles, when machines that fit in our pockets are capable of doing tasks that would have had us charged with witchcraft in earlier times.

But those pocket-sized miracles only go so far, and sometimes even stepping up from a smartphone to an iPad or a Chromebook isn't enough to accomplish a particularly demanding task. For those occasions, only an honest-to-goodness PC running Windows or MacOS will do. Which is why PC makers (including Apple) continue to sell more than a hundred million portable PCs and MacBooks every year.

PCs have experienced a renaissance of sorts in the pandemic era, which means more and more of us are looking at laptops as a primary work and school device instead of something that gets occasional use. If you've shopped for a laptop lately, you know that there are hundreds, maybe thousands of options available from OEMs large and small. That much choice can be paralyzing, which is why it helps to go through the specs carefully.

When a friend or colleague asks me "Which laptop should I buy?" I won't even think of making a recommendation until we've gone through this checklist. I share it here so you can do the same.

Mac or Windows: What platform should I get?

Don't believe anyone who tells you Macs and PCs are interchangeable. "MacOS or Windows" is the fundamental choice you have to make, and few of us are agnostic about it. The answer is usually predetermined by some combination of your comfort level, your existing software investments, and (most crucially) what your fellow team members use.

Older, Intel-based MacBooks offer a built-in advantage for those who occasionally need to run both operating systems, thanks to their ability to run Windows in a virtual machine. Unfortunately, the newer M1-based Macs are severely limited in their ability to run Windows virtually. Currently, the only option involves downloading preview releases rather than stable, properly licensed copies of Windows. Running MacOS on a Windows machine isn't an option.

If you're comfortable with a Mac, get a Mac. But if you're a Windows person at heart and plan to do most of your work on that platform, do not choose Apple's hardware. You'll pay a premium for hardware that wasn't designed for Windows, and forcing Windows to work with Apple's keyboard layout will eventually drive you mad.

What display options do I need?

Do you want a touchscreen, or can you do without? (If you chose MacOS as your preferred platform, of course, touch isn't an option.) Will you accept a full HD resolution or do you want the crispness and extra cost of a 4K display? Do you prefer the standard 16:9 aspect ratio or is a 16:10 or 3:2 aspect ratio more to your liking?

And finally, what about screen size? The most common choices are 13-inch and 15-inch, and your choice has a direct impact on the next important decision point: weight and form factor.

By definition, every laptop is portable, but just how portable does your laptop need to be? If your laptop stays on your desktop most of the time, with only an occasional side trip to a conference room or coffee shop, weight probably isn't that big a deal. For those who travel regularly, on the other hand, an extra pound or two in your shoulder bag can be physically punishing.

Closely related to weight is your choice of form factor. Do you prefer a traditional clamshell, or will you make good use of a 2-in-1 form factor like the Surface Pro (with or without a pen) or Lenovo's Yoga line? 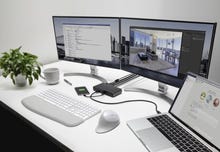 There's never been a better time to upgrade your work-from-home setup with a docking station that transforms your laptop into a more comfortable working environment. Here's what you should look for.

In general, the engineering that goes into a lighter-than-average laptop or one with an exotic form factor tends to drive up the cost. And typically the heaviest component in a modern laptop is the battery, which leads us to the other key variable in the portability equation: battery life.

How much battery life is enough?

Modern laptops have finally begun to deliver on promises of "all day battery life," but there are still plenty of designs that can reliably run for only 4-5 hours before you need to begin searching for a power outlet. And that might be OK, depending on your work habits.

The biggest caveat when considering this criterion is that PC makers consistently overstate real-world performance in their published battery life estimates, so take those figures with a healthy dose of skepticism. And even independent benchmarks might offer a measurement that's based on activities that don't match up with your workload.

In theory, you can get 12 or more hours from a laptop battery if the OEM designed the machine properly. Ironically, laptops with larger screens have a built-in edge because their larger footprint means the case can accommodate a correspondingly larger battery. Some of the best battery life in Windows PCs is available with PCs built around Arm processors, but compatibility issues associated with Windows on Arm make it impossible for us to recommend these models for mainstream business use. Apple's new M1-based Macs, on the other hand, have received excellent reviews for their real-world ability to run and run and run.

Which CPU and GPU do I choose?

Which CPU should you choose? And are built-in graphics sufficient or do you need a discrete graphics processing unit (GPU)?

Most people overestimate the importance of the CPU for everyday productivity tasks. In general, an Intel Core i5 or i7 will offer adequate performance for productivity purposes (skip the i3, which is intended for low-end consumer PCs). AMD offers excellent CPU options that are particularly appealing for gamers. As for a GPU, anyone who expects to do serious gaming or video processing needs a discrete GPU, but for the rest of us, onboard graphics are probably good enough.

And be sure to get a recent CPU design, one that's no more than a generation or two behind the current Intel Core line. For 2021, that means a 10th Generation Core design or later, and any Zen 2 AMD processor, such as the Ryzen 3000 or later. Those chips are most likely to have the latest security enhancements and power management features; they're also guaranteed to be compatible with Windows 11.

If you prefer a MacBook, the M1-based designs have a long life ahead of them, whereas Intel-based models, despite lower performance and shorter battery life, offer cost and compatibility advantages, including the ability to run virtual copies of Windows.

How much memory do I need?

How much memory do you need? You can find budget laptops configured with 4 GB of RAM, but in my experience that's a false economy, offering a guarantee that you will regularly experience the sort of sluggish performance that comes with memory pressure.

ZDNet contributors welcome you inside their home-based workspaces and show off the tech gear that drives their productivity.

My guidelines are simple: For mainstream productivity tasks, 8 GB is sufficient. Configure the system with 16 GB if you regularly perform demanding tasks such as photo and video editing, or if you plan to run one or more virtual machines on a regular basis. Developers and engineering professionals might benefit from 32 GB or even 64 GB.

With very few exceptions, most laptops don't allow memory upgrades, so it's important to get this spec right from the start. If you're not sure, choose the higher value.

How much storage is enough?

For data storage, as with memory, more is better, and the general lack of easy upgrade options means it's important to choose wisely when you buy. Now that we're well into the 21st Century, we can't think of any good reason to choose anything other than SSD or NVMe for a system drive.

As for how much space you need on that drive, 128 GB of storage is a bare minimum for basic productivity; that class of machine is best-suited for those who keep most of their data (including email) in the cloud and don't need to store large amounts of media files. Upgrades to 256 GB are generally a cost-effective way to eliminate data anxiety, whereas larger upgrades (up to 1 or 2 TB) can be expensive but worth it for professionals who work extensively with digital media files or virtual machines.

Most ZDNet writers prefer this notebook above all others

If you spend hours daily banging away at a keyboard, you'll want to consider these favored models.

And don't ignore external options. SD card support can be useful for backups and non-critical auxiliary storage, but for high-performance external drives, insist on support for the Thunderbolt 3 or 4 standard.

Which keyboard and touchpad is right for me?

There are different styles of laptop keyboards, with different types of tactile and audio feedback. You can't know which one will make you happy unless you try them personally, for at least a few days of normal work. That's why I absolutely will not buy a new laptop without a no-questions-asked return policy good for at least 14 days from the date you receive it, with no restocking fees.

If you plan to regularly use that laptop in a dim location, such as an airplane cabin or a dimly lit meeting room, make sure the model you choose includes an illuminated keyboard.

As for touchpads, size is a matter of personal preference, but my one ironclad rule for Windows PCs is to insist on a Precision Touchpad, which offers a full range of configuration options in Windows 10. Invariably, when I hear a complaint about wonky touchpad behavior, it's on a system that uses hardware that doesn't adhere to this standard. Don't say I didn't warn you.

What about networking and Bluetooth support?

Wi-Fi standards are currently in a state of transition, with hardware that supports Wi-Fi 6 (802.11ax) just beginning to roll out. Do you really need the latest networking technology? Probably not, although it does add a tiny amount of future-proofing to your hardware. Most people will do just fine with 802.11ac technology for the foreseeable future.

Bluetooth Low Energy (LE) and Bluetooth 5 support, on the other hand, are both on my must-have list, with advantages in power consumption, range, and reliability that are apparent with devices that exist today.

The one networking technology that's still an expensive option and probably too much extra cost for most people is mobile broadband. It's convenient, but it's also still relatively hard to find. If you think you'll use it enough to make it worthwhile, that choice will narrow down your laptop hardware options to a very short list.

Do I really need biometric authentication?

I saved this category for last, because many people will probably be perfectly happy without biometric support. But every time I use a PC or MacBook that doesn't have a fingerprint reader or a Windows Hello camera, I realize just how many hours a year I spend typing (and mistyping) passwords. The fingerprint readers on modern Windows laptops have become very good, but there's something magical about sitting down and signing in by doing nothing more than looking at your PC. Highly recommended.