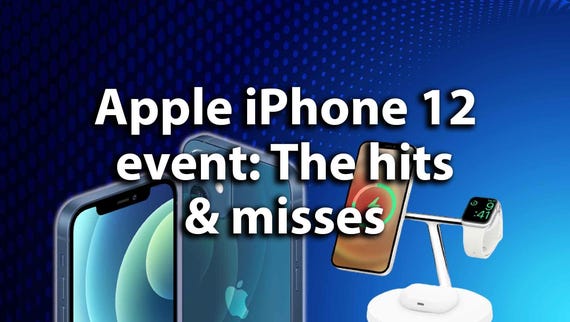 Apple iPhone 12 event: The hits, the misses, and the products that didn't appear
Watch Now

It's that time of year again. No, not Amazon Prime Day (although that's happening too), iPhone day. And while we already know pretty much everything there is to know about the iPhone 12 (it's clear Apple has been hard at work curtailing wild expectations given all the "leaks"), within microseconds of the official unveiling, social media and tech sites will be awash with "why did Apple not add THIS feature?" where the "this" is anything and everything from more RAM to a better camera to a toothbrush that doubles as a dog brush.

People want the iPhone to be all things to everyone.

Why did Apple not add YOUR feature?

First and foremost, cost. Everything costs money, and there's nothing like scale to make that stand out.

Apple is expected to sell as many as 80 million units between the launch and the end of the year. Suppose your most-desired feature added only one cent to the overall cost of the iPhone, that scales out to $800,000 for that many handsets. Now, if you want something ambitious like more RAM or storage for no extra money, then that's a multi-dollar item, and the costs really start to spiral.

But there's another reason. A little subtle, but equally important. And that's just the scale of the iPhone.

Imagine adding one screw to the iPhone.

Now scale that up to 80 million screws. You're now hip-deep in screws.

All of a sudden, Apple needs to order, ship, store, handle, and install 80 million more screws.

That's a lot, and it explains why there's a lot of adhesive in new iPhones.

Take something as small as adding another color to the iPhone lineup. Seems simple, right? After all, it's just a color.

Setting aside the fact that Apple puts a painstaking amount of detail into making sure that a finish is durable and can be replicated across millions of devices, there's a massive amount of logistics involved, from knowing how much of the new color components to order, to storage, to making sure Apple Stores have samples for customers to paw at.

You now also see why Apple dropping things like the charger and EarPods has less to do with ecological altruism and more to do with simplifying the supply chain and saving money.

That's how much of something that can be made reliably. Whether you're making processors or RAM or camera sensors or screens, there's always defective components rolling off the manufacturing conveyor belt.

The higher the defect rate, the lower the yield.

The more complicated you make something, the higher that defect rate usually is. Not only does that cost money, but it also affects how many you can make in a fixed period.

If you need to make a dozen, no biggie usually. If you might need to make 80 million by the end of the year, that changes things.

A company like Apple does not want delays in being able to exchange iPhones for money to be held up by yield issues. Something as simple as poor display or camera sensor yield could have a massive impact on how many units Apple shifts.

It's always a balance between new and exciting versus being able to make enough of something to keep up with demand.

Now balance all this, throw in a price point that won't scare everyone off, and that's why the new iPhone 12 is what it is.

Join Discussion for: 'Why did Apple not add THIS feature to the...