This morning I read my ZDNet colleague Adrian Kingsley-Hughes' column regarding Apple's apparent uncaring attitude about the Android flagship smartphone competition's tech specs, particularly as it pertains to the rumors regarding what parts are going to make their way into the iPhone 7.

Essentially, he argues that the company is competing against no one, that they have such unflinching brand loyalty given that their customers are so addicted to their products, and thus they are in a position to not give a crap.

Fundamentally, I agree with this. I've written ad nauseum about the upstarts in China that are breathing down not only Apple's neck, but also Samsung's, by producing flagship quality hardware at a fraction of the price.

Some of these companies are just starting to make landfall in the US market, such as Huawei's Honor brand. Others, such as ZTE and OnePlus, have been here for a while and are already engaging in massive disruption by releasing compelling and disrupting products such as the newly released Axon 7 and OnePlus 3.

There are still other Chinese companies that have products that haven't hit our shores yet, such as Xiaomi and Oppo. And when they do decide to make a beachhead in the North American market, look out.

So if you look at Apple's growth numbers with iPhone, it doesn't look good. Combine this with industry margins on smartphones plummeting due to a Chinese commodity invasion, and Apple has reason to be concerned. But seemingly, they aren't. They seem overconfident.

That being said, if the upcoming iPhone 7 turns out to be evolutionary, I don't think this will be a successful product roll-out for the company. Then the overconfidence is simply arrogance, and Apple will be punished for it by an unforgiving market that is being disrupted by commoditization.

However, as hard as I am on Apple's ongoing prospects as it relates to the four horsemen of the Chinese smartphone apocalypse, I suspect we are missing something important here.

Could it be that the iPhone 7 isn't just a smartphone, but part of an integrated system that is something else entirely?

There are two things in this particular product release that have caught my attention. First is that there have been no recent rumors at all about display technology used in the device. We've seen mockups of phones, so we know what the form factors look like. 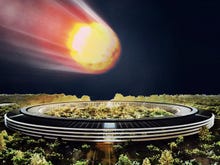 But we have no idea about the visual aspects of the new iPhone.

In April of 2015, Sharp announced that it was beginning production of 5.5-inch 4K (3840x2160) 806ppi IGZO displays. After that rumor flew around, all went silent regarding that technology. The company started having serious financial problems and began seeking a buyer.

As it turned out, in April of 2016, FoxConn, one of the primary manufacturers of the iPhone, ended up buying Sharp for $3.5 billion.

Why is this significant? Well, 4K would be a major spec bump in terms of display resolution for the larger SKU iPhone. Additionally, IGZO, or Indium Gallium Zinc Oxide displays, have significant technology benefits which include dramatically increased electron mobility, over 40 times that of the amorphous silicon used in traditional TFT displays.

A use of IGZO would mean increased luminosity, higher reaction speed, and increased battery efficiency, not just the huge resolution and pixel density bump. It also creates a much thinner sandwich than TFTs, even the part that Apple currently uses in the iPhone.

So super nice display. A good thing to have, but not must-have for a smartphone.

Let's move on. The larger 5.5-inch iPhone, which some have dubbed the iPhone Pro, is expected to have twin cameras in the rear of the device.

Why do you need twin cameras? Well, on a smartphone, at least as it pertains to digital photography, stereoscopy means you can shoot burst exposures and do selective compositing of different focus depths and do image processing on those exposures. You can also shoot 3D photographs and do perspective vision types of applications.

So interesting, but also not a must-have feature on a smartphone.

What else does the 5.5-inch iPhone 7 have? Well, it reportedly has a new docking connector and also stereo speakers.

Some say the dock is for some special charger or a keyboard. I think those are certainly possibilities, but what if it is intended for something much more radical?

What if the iPhone 7 Pro is actually the brains of a virtual reality/augmented reality headset? A headset that performs as a smartphone by day, but snaps into a head-mounted cradle at night, like the Samsung Gear VR?

An entertainment device that performs the function of a gaming machine and TV set? An Apple TV without a TV? One that can provide fully immersive experiences and exclusive content from virtually anywhere?

Now the parts start to make sense. A 4K high-density pixel display would be needed in order to provide the most realistic VR experience possible, especially if it is being used close to the eyes. You'd want the sharpest, best color reproduction as well.

For the headset to be able to be used for augmented reality applications, such as a true-AR version of Pokemon Go, you would absolutely want stereoscopic vision. You would want comprehensive depth information on anything in front of the cameras, particularly if you were moving your hands in front of it in order to control a gesture-based interface.

Machine vision techniques would have to come into play here, big time.

And stereo speakers? Any good VR application is going to need that, especially if you want 3D sound effects. They could certainly integrate them into the headset dock, but I suspect something like that would primarily be an external battery pack and have some sort of control buttons -- although theoretically, the Apple Watch could be used in conjunction with this device in some sort of paired mode as well.

And what about the lack of a headphone jack? Perhaps Apple wants to do this not to screw the legacy mini-jack headphone accessory industry or infuriate its customer base. Perhaps the company wants to transition to end-to-end high-resolution digital audio, by integrating a Digital Audio Converter (DAC) into the device and providing a way to send data to compatible decoding devices.

The lightning port would be a much better candidate for this than mini jack, which requires pulse code modulation to do digital signal encoding to external DAC devices today on existing iPhones. This would eliminate the need for that entirely and removes potential line noise problems as well.

If you were to create fully immersive VR experiences you would want the headset dock device to be able to play high-definition audio, for sure.

If you've been wondering what all that 64-bit horsepower in the iPhone's A-series chip has been waiting for the last few years, this is probably it. Any iPhone 7 that forms the basis of a virtual reality or AR system is going to need processing power previously unheard of in a mobile device.

Expect the A10 chip to be a whopper of a SoC, with incredible GPU performance to match.

I don't know for certain that the iPhone 7 Pro is really a VR machine. But my gut says that Apple is looking to disrupt, and this could very well be the One More Thing the company is looking for to continue years of mobile industry dominance.

Is the iPhone 7 Pro really a Virtual Reality headset in disguise? Talk Back and Let Me Know.

Join Discussion for: Why every iPhone 7 spec and rumor points...