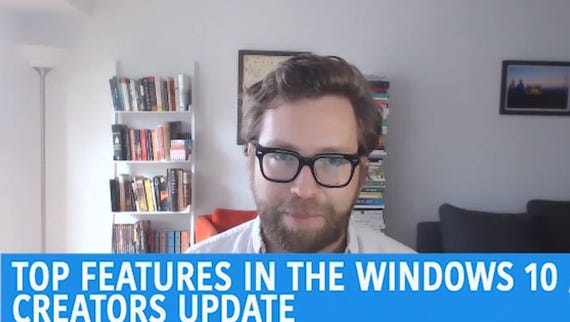 After a little more than two years, Microsoft has finally settled into a rhythm with its new, fast-paced development cadence for Windows 10. 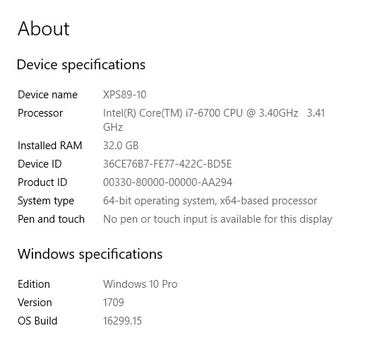 What Microsoft's marketers are calling the Fall Creators Update (officially version 1709) begins arriving on desktop PCs today via Windows Update and will soon be available for download at all the usual places.

The final build number for this release is 16299.

This is the fourth feature update to Windows 10 in a little over two years. And that pace will continue, with new feature updates (essentially full upgrades) due on a predictable twice-yearly cadence going forward.

As with previous feature updates, there are no last-minute surprises in this update. It's been developed in the open, with dozens of preview releases to members of the Windows Insider Program. For those who haven't been paying close attention, though, this article should get you up to speed quickly. 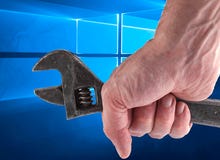 More importantly, it means you have to decide whether to allow the upgrade to happen on Microsoft's schedule or to take charge of the upgrade timing yourself. IT pros responsible for managing a fleet of Windows 10 PCs can use group policy settings to temporarily delay the Fall Creators Update for up to 18 months; individual Windows 10 users have simpler options in the user interface. In either case, it's crucial to act now.

For most business PCs, the correct option is to defer upgrades for at least a few months, while testing the new release on a limited number of pilot devices to identify compatibility issues with existing applications and hardware.

The new and changed features in this release encompass a wide array of user scenarios, including a healthy assortment aimed at IT pros and developers.

One of the most important benefits of the twice-annual feature update schedule is that it allows Windows developers to incrementally improve features that previously would have languished for years between major releases. In this feature update, for example, you'll find the following small but meaningful usability tweaks:

Every Wi-Fi connection now has a prominent option to configure whether it's part of a public or private network, as shown here. In previous versions, that option was difficult to locate.

Similarly, the venerable Task Manager has several small improvements, including options that allow you to track GPU activity on a per-application basis and more convenient grouping of related processes. This release also incorporates changes designed to improve the experience of running Windows on high-DPI displays; built-in utilities like Registry Editor and Snipping Tool are no longer blurry when moving between multiple displays running at different scaling factors..

The Power Throttling feature makes its debut in this release, offering a simple slider-based option that lets you tune Windows 10 for better battery life or better performance.

The built-in Windows 10 apps also include major improvements in this release. I'll have a more detailed look at them in a follow-up post.

After a few gyrations in the first year, the basic design of the Windows 10 Start experience has remained consistent. This build is the first to incorporate elements of Microsoft's new Fluent Design, which adds subtle performance and usability improvements, including easier resizing and smoother transitions.

Action Center, which hosts notifications on the right side of the screen, also gets Fluent Design features (most noticeable when you have transparency turned on) and is redesigned to make it easier to deal with notifications.

Cortana's settings, which used to be available only from within the Cortana app, are now integrated into Settings. And in a cool design change, Cortana now displays answers in a flyout from the Start menu. That also includes results from web searches (powered by Bing only), which means you don't have to open a browser to do a search.

Windows Update has also evolved significantly in the two years since Windows 10's initial release. When new updates are available, you'll see an interactive toast notification that doesn't interrupt whatever you're doing now. In addition, the Windows Update display now offers detailed information about the status of individual updates, so you don't have to wonder whether anything's happening in the background.

The Delivery Optimization feature, which uses peer-to-peer networking to improve download performance of updates for Windows and Store apps, gets a much-needed set of advanced options that allow you to fine-tune the amount of bandwidth it's allowed to use and also limit the total uploads on a monthly basis.

One of my favorite classic Windows features, Volume Mixer, has finally been updated to include Universal Windows Platform (UWP) apps, including Microsoft Edge and Groove Music. This option, accessible by right-clicking the speaker icon in the taskbar, lets you set the volume of each app independently without affecting the overall system volume.

Another minor but welcome change is the addition of GPU performance information in Task Manager for systems with a discrete GPU.

The My People feature, which lets you pin icons for frequent correspondents to the taskbar, looks like a gimmick at first but in my experience has become incredibly useful. If you connect mail, calendar, and messaging accounts, it can show appointments, email messages, Skype conversations, and contact details in a scrolling window that's available with a single click.

The migration of Windows knobs and levers from Control Panel to the modern Settings app continues with this update. Here are a few noteworthy changes:

Settings > System > About has been reorganized and streamlined. Previously, the information displayed here was in a single long, scrolling list. The new arrangement organizes the information into three blocks, covering system health, device information, and Windows details.

The incredibly useful Magnifier tool, which eases eyestrain by allowing you to zoom in on text and objects, also gets its own top-level category in Settings > Ease Of Use.

The long list of improvements to the security architecture of Windows 10 starts with a momentous change. The horribly insecure SMBv1 protocol is being removed from clean installs of Windows 10. (The SMBv1 components will continue to be included on upgrades where they are already installed.)

As a side effect of that change, the legacy Computer Browser service is also being removed.

The Windows Defender Security Center, which was introduced in an earlier feature update, has two major additions. The first is Exploit Protection, which offers many of the mitigations that were previously part of the separate Enhanced Mitigation Experience Toolkit (EMET).

The Fall Creators Update also debuts an anti-ransomware feature called Controlled Folder Access, which is also available through the Windows Defender Security Center, under Virus & Threat Protection Settings. When this feature is enabled, only approved apps can access Windows system files and data folders. (You can customize the list of data folders and whitelist specific apps, using the instructions in this online documentation: Protect important folders with Controlled folder access.)

One of the single most useful features in the Professional and Enterprise editions of Windows 10 is Hyper-V. This extremely robust virtualization platform gets more than its share of attention in this release.

A new Virtual Machine Gallery should make it easier for task-focused users to create useful virtual machines without having to wade through a long series of technical settings. Currently, this gallery includes a preconfigured development environment running an evaluation version of Windows 10 Enterprise.

After you create a virtual machine, you can export it more easily as well, by clicking the new Share button and compressing its pieces into a .vmcz file that can be imported on another Hyper-V capable PC.

In a change of default settings, checkpoints are now on, allowing you to roll back any VM even if you forgot to create a checkpoint manually.

A new advanced feature worth noting is the addition of virtual battery support in Hyper-V. When this feature is enabled on a VM running on a battery-powered device, you can see your physical machine's battery state inside a VM.

It took much longer than it should have, but the OneDrive Files on Demand feature is now built into Windows. The settings take some getting used to (I'll publish a tutorial later) but the results are worth it, with a much better way to work with large amounts of cloud storage on devices with minimal local storage.

For those who use either the consumer version of OneDrive or the Office 365 OneDrive for Business feature, this is probably the single most important new feature in Windows 10.

Another unheralded feature in Windows 10 also gets some improvements in the Fall Creators Update. Storage Sense, which is designed to manage storage intelligently, has a new design and a few new settings.

You can now delete previous versions of Windows directly from Storage Sense instead of having to go to the legacy Disk Cleanup Manager utility.

In addition, you can now opt to automatically delete files that have been in your Downloads folder for 30 days without changes. This and other options are available in Settings > System > Storage > Change how we free up space.

Microsoft Edge, the default browser in Windows 10, is still unlikely to win over most Chrome users, but it's steadily improving.

The biggest change in this update is a vastly improved interface for managing saved Favorites. You can now rename Favorites, edit their URLs, and work with folders directly without having to switch to a special editing mode. (The Edge design team must have been reading the comments on the Creators Update installment in this series.)

The ability to pin sites to the Windows taskbar, previously available in Windows 8, is back, but the implementation is frustratingly incomplete and will disappoint anyone who previously relied on this feature.

Microsoft is also determined to turn Edge into something more than just a web browser, as it's beefed up PDF reading capabilities and added annotations form filling for PDF files. In addition, you can now add notes and annotations for digital books that you read in Edge.

One of the major selling points of Windows 10 devices (led by Microsoft's own Surface line) is support for input from sources other than traditional keyboards and pointing devices.

Windows 10 already had some of the best handwriting input tools available on any platform, and this update adds some noteworthy improvements that are worth experimenting with if your PC includes a pen. In addition, Microsoft has improved the design of the touch keyboard to make it easier to use.

But the real news, and probably the single most important feature of this update, is the ability to enter emoji directly into a text box.

OK, I was kidding about this being the most important feature, but it certainly makes using Windows more fun. Press Windows key + period (or semicolon) to pop up an emoji box like the one shown here. Although it's not immediately obvious, you can also begin typing a word to search for a particular emoji based on that term.

For those who've been part of the Windows Insider Program and have been following these builds, what are you looking forward to most?

Microsoft's latest Windows 10 Fall Creators Update Update test build, No. 16273, is almost entirely about bug fixes, as it closes in on 'release to the world' (RTW).

FAQ: How to install, reinstall, upgrade and activate Windows 10

Here's what you need to know before you repair, reinstall, or upgrade Windows 10, including details about activation and product keys.

Two years after its splashy debut, Windows 10 is now running on more than 500 million PCs worldwide. Was the upgrade worth it? Here's my report card.

The Creators Update is heading to pretty much every PC, and many mobiles, that run Windows 10. However, the extent to which it matters depends on your priorities.