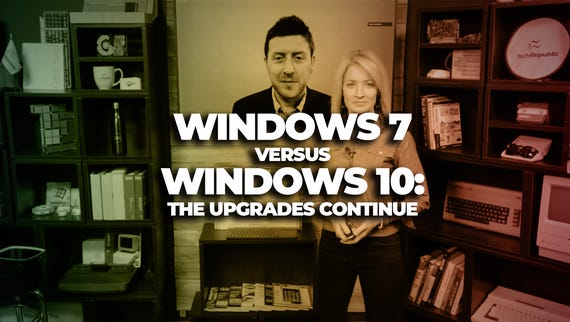 The clock is ticking for IT teams that haven't made the switch to Windows 10 – support for Windows 7 ends on 14 January 2020. Despite that deadline, estimates suggest a third of Windows users are clinging to Windows 7. If that's true in your business, how can you manage the switchover? Four CIOs give their best-practice tips for moving to Windows 10.

1. Reach out to those in the know

Windows 10: What do CIOs really think about it? Which operating system they are using is no longer a top priority for tech chiefs.

Dylan Roberts, chief digital and information officer (CDIO) at Leeds City Council, says the move from Windows 7 to 10 represents a subtle shift for most organisations. He describes the operating system as "solid and well done" – it's a continuation of what's come before, and it can be best-exploited by ensuring your IT team has close working relationships with external experts who are in the know.

"The transition to Windows 10 isn't something your organisation should struggle with, so ring your Microsoft account manager or speak with a partner," he says. "In local government, we talk about simplify, standardise and share – you can learn some great knowledge by collaborating with organisations that have already been through the transition. But what you don't want to do is swap out all your devices sooner than you need to."

Roberts says Leeds has moved about a quarter of its estate over to Windows 10. The organisation's IT team will ensure all devices are updated before the deadline. Roberts says the council has taken a staged approach to the transition and has not been in a rush to move to the new operating system.

"We've tried to sweat the asset," he says. "We need to consider how Windows 10 will work with all our existing applications, particularly in terms of legacy systems. Moving to a new version of an operating system can mean you also need to update hardware, such as providing more memory and moving to solid state disks."

Richard Gifford, CIO at logistics firm Wincanton, says his organisation's approach has been to move to Windows 10 as quickly as possible. Most devices at an enterprise level are now on the new version of the OS. While there are pockets of older Windows technology that remain in certain areas, such as automation and telephony, Gifford is not too anxious.

"As long as we're patching and we've got anti-virus on those devices, I'm not overly concerned. I think there's bigger fish to fry at the moment. But our aim is to be ready for the end of support. You should work to make sure you minimise business disruption, ensure that the builds that go out are robust and that they guarantee your application environment still works," he says.

Gifford, however, recognises that transferring legacy kit on older operating systems to Windows 10 is no easy task. Wincanton will run out remaining devices using Windows 7 on a depreciation cycle and then buy replacement kit that runs Windows 10. Where pockets of resistance still remain, Gifford advises other CIOs to quarantine older technology behind a firewall so that it's secure.

"It's fine when applications are moved to the cloud but most businesses will still run a lot of software on the desktop too, especially when it comes to decentralised offices running spot solutions. You can run into problems – the key is to anticipate that things like this will happen and ensure that all anomalies are picked up when you move over to Windows 10," he says.

Interim CIO Brad Dowden has straightforward advice for IT managers wondering about how and when to move from Windows 7 to Windows 10. "Just do it," he says, before suggesting that CIOs should apply simple ground rules to any switchover.

"Like any regular project, understand what your needs are and map everything across your estate," says Dowden. "Do you go for a point when you decide to upgrade a whole lot of devices, or do you agree to roll the operating system out over a longer period of time and create a constant refresh cycle, where you keep replacing a proportion of your estate?"

Dowden says CIOs must ensure they know their application layer is conducive to working on the new operating system. Testing is critical. He says IT managers should also focus on licensing models. Some devices might come with OEM licenses that are not upgradable. In his role as CIO, Dowden has moved towards the Microsoft 365 licensing model.

"Then you get Office 365 included and you get a perpetual Windows 10 licence," he says. "The Microsoft 365 module is good because then you have your Active Directory in the cloud and that's the right journey to take. That gives you upgradeability and you can deploy software remotely. Understand your infrastructure and use tools to analyse your estate, so that you know which machines are upgradeable."

4. Go for an early switchover to help keep vulnerabilities at bay

Gary Foote, CIO at Rich Energy Haas F1, says his racing team pushed heavily to get on to Windows 10 as soon as it was a stable platform. As a result, there's now no Windows 7 left in the business at all. Foote's reasoning for the early switchover is simple: he wants Haas F1 to stay at the forefront of technology in the fast-paced world of Formula 1.

"Doing things the traditional way isn't for us," he says. "It's tough for us to complete in our sport on a level playing field with the manufacturer-backed teams, with huge resources at their fingertips. We can't do that and we know that, so we need to think differently."

Crucially, Foote says he benefits from working with a user base at Haas F1 that's sympathetic to technological change. While some organisations might want to leave the switchover as late as possible, Foote says engaging with users and implementing Windows 10 brings piece of mind – and he encourages other CIOs to embrace the change, too.

"If you leave a couple of devices on Windows 7 because a user is grumpy about moving or there's a piece of controlled software that only works on an earlier operating system, then you might forget about it – and then, in two or three years' time – that's when your vulnerabilities come in," says Foote.

Join Discussion for: Windows 10: How you can successfully make...