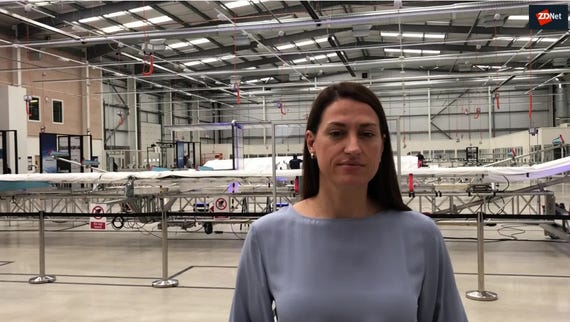 How a solar-powered drone will beam down the internet from 70,000 feet
Watch Now

Airbus has opened a production line for its high-altitude autonomous drone, the Zephyr S.

The Zephyr has a wingspan of 25 meters and is designed to operate in the stratosphere at an average altitude of 21 kilometers -- above clouds, jet streams and ozone layer, as well as regular air traffic (apart perhaps, from the odd spy-plane). Airbus wants the drone to fly for 100 days without landing (its currently record is 14 days without refuelling) and travel up to 1,000 nautical miles per day. It weighs 75kg, but can support a payload up to five times its own weight.

The drone can be used for things like surveillance and reconnaissance -- the UK's Ministry of Defence has already bought several of the unmanned aerial vehicles (UAVs).

It could also be used to create a communication network either for civilian or military uses -- Facebook recently cancelled its own plans to build high-altitude drones to deliver internet access in remote areas, but at the time said it would continue to work with partners like Airbus on such vehicles.

The Zephyr S is the first production model from the Zephyr programme; previous Zephyr aircraft were research and development prototypes; the drones will be built at a production line in Farnborough.

Sophie Thomas, head of the Zephyr programme at Airbus told ZDNet: "The vision was there over ten years ago. What we've been waiting for and working on is the technology developments in different areas like battery technology and the the solar array -- for that to be ready and available to the standard we need to make this a really viable product. That's where we are today."

Thomas said operating in the stratophere gives the drone two advantages over satellites: "The first is that you are much closer to the Earth, so you can get far higher-resolution imaging. Secondly for communications you get reduced latency. The beauty of it is we have an endurance that is really powerful, so we can persist for over 100 days, yet the flexibility of being able to retask."

The UAV is significantly cheaper than satellites and the modular design can take different technology payloads, added Thomas.

In future, Airbus will be flying Zephyr S from its new operating site at the Wyndham airfield in Western Australia. The site will be operational from September 2018.

This drone can deliver the internet from... SEE FULL GALLERY
1 - 5 of 4
NEXT PREV