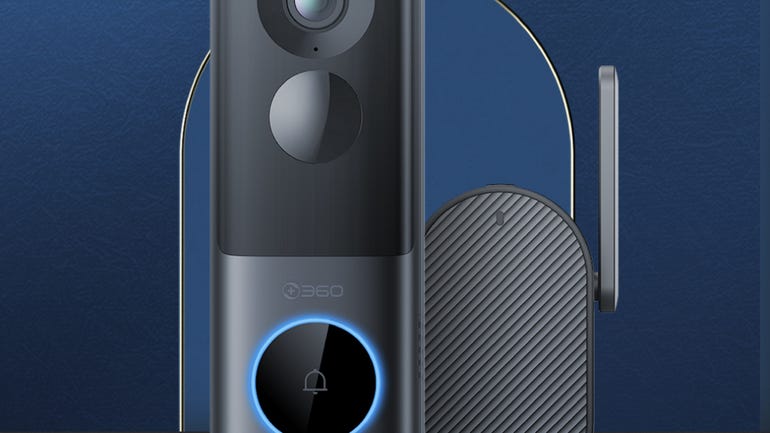 Video doorbells are a useful addition to your home security setup. The ability to talk to people at your door and give them instructions on where to leave parcels is invaluable, and the latest video doorbell from 360 has all of the features you need to monitor your front door area.

The 360 X3 video doorbell is one of these valuable doorbells with a 5MP camera with a 2496 x 1920px resolution 4:3 aspect ratio and radar detection for visitors.

Inside the box, there is the doorbell camera, the Wi-Fi base station, a mounting bracket and a wedge to mount the camera at an oblique angle to the door if you want.

There is also a USB Type-C charging cable, a screw hole template, screws and wall plugs, and a packet of extension wires. There is also a doorbell 'detaching pin', which is exactly the same as a SIM pin.

The camera is fitted with a 5,000mAh battery which is recharged using USB type-C from the connector at the back of the unit. There is also an optional add-on battery pack and an option to hardwire the doorbell to power inside your home.

With the onboard battery recording ten events per day, 360 reckons that the doorbell will last for around six months before it needs to be recharged.

The user guide explains how to mount the doorbell to your door and onto the bracket. It also tells you to download the Botslab app to manage the doorbell. There are few other instructions about the X3's features.

Once you have downloaded the app and created an account, connect the doorbell to the base station. You need to press the button on the top of the base unit until it beeps and then press and hold the power button on the doorbell until you get a voice prompt.

Press the button on the front of the doorbell, and the light will start flashing blue. The base station will ping to show that it has connected to the doorbell.

The app quickly discovers the Wi-Fi and searches for the device. If the battery is not fully charged, you will not be able to connect to the app. You then need to press the power button on the doorbell three times in quick secession until the doorbell is ready for WI-Fi connection.

Once you have received the voice prompt that the doorbell has received the app's message, you can continue connecting the doorbell to the app. It is a bit of a convoluted process -- far harder than simply scanning a QR code to connect.

Once all is connected, you can configure the settings you require -- such as recordings, alerts, event alerts such as sirens for suspicious alerts if a person is detected to a specified schedule.

As I have a milkman who delivers milk to the house in the middle of the night or early morning, I did not test this feature in case my milk was never delivered again. Other siren alerts will trigger if anyone tries to remove the doorbell from its housing.

You can configure the X3 to detect objects within a range of up to 30 feet and change its sensitivity. My cat quickly learned that this was the quickest way to get attention when he wanted to be let into the front door.

Perhaps I needed to move the doorbell to a higher position, but I want to see packages placed on the floor outside the door so that I would be notified both when the package was placed -- and if someone picks up the package.

If you live close to other houses, you can configure a private zone to stop your camera from detecting objects approaching your neighbour's property. You can also configure your doorbell to use your existing door chime if the doorbell is hardwired.

Other settings enable you to add WDR to give you better image quality and set the volume level in the doorbell and base station. You can tweak the length of the recording and the retrigger interval to save power, and switch on the device LED light.

You can also view the health of your doorbell, including the battery level, the strength of the Wi-Fi signal, and the doorbell to base station signal. There are certainly a lot of settings to tweak.

The X3 has 8GB local storage, which will store up to 120 day's worth of 15-second video recordings, assuming ten recordings per day.

If you need it, it will also work as a Wi-Fi amplifier so that calls via the doorbell do not suffer signal loss. If you need more space, you can purchase a subscription to the cloud service.

The doorbell works with voice assistants such as Alexa, so you can talk to the person at the front door without using the app.

The doorbell can distinguish between family and friends and strangers – but as I tend to have more strangers visiting my door, I did not notice any differences in who is recognised. Perhaps my friends do not visit often enough for the doorbell to recognise any of them

360's Indiegogo campaign for the X3 doorbell was quickly funded, with over 4000 backers, but many backers had issues with receiving refunds and experiencing sub-standard delivery. Hopefully, 360 has sorted out these issues now that the product is available on Amazon

The only issue that I can see is that the X3 doorbell comes with an adhesive on the back of the mount in case you do not want to damage your wall – but this could make the doorbell easy to steal -- even though I would receive an alert when it happened.

All in all, the 360 X3 video doorbell is a very useful addition to your home security setup. The ability to talk to people at your door and give them instructions on where to leave parcels is invaluable.

It does take time to set it up and configure it correctly, but once you have installed it and connected it through the app, you can rest assured that it will monitor your front porch space and alert you whenever someone -- good or bad -- enters your space.