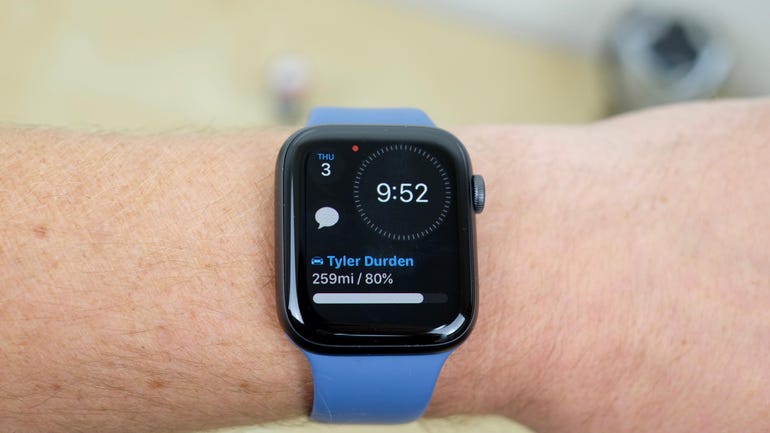 From the outside, and on paper, there's not a huge difference between last year's Apple Watch Series 4, and the recently released Series 5. The aluminum and stainless steel models look identical, but the Series 5 has bragging rights, thanks to new titanium and ceramic housings.

There is, however, one big difference between the Apple Watch Series 5 and every Apple Watch that came before it: It has a display that never turns off. Well, it's an always-on display that stays whenever you wear it. The time is constantly visible, just like a traditional watch, and according to Apple, it has no ill effects on battery life.

For around two weeks now, I've used the Apple Watch Series 5 in place of my Series 4. Before I started testing, I didn't expect to notice much of a difference between the two, and for the most part, that's been the case.

But what I foolishly underestimated was the impact that the always-on display would have on the overall Apple Watch experience. And now, I'm not sure I can go back.

It's a real watch now

The always-on display (AOD) of the Series 5 has changed the way I use the Apple Watch throughout most of my day. The screen does more than constantly show the time, but it also shows watchface complications. For me, that means I can glance down and see if I have any unread messages or view my next agenda item from the calendar complication without any effort.

If you've ever owned an Apple Watch -- or any smartwatch for that matter -- you surely know the awkward routine of raising your wrist to look at the watch, only for it not to light up. Instead, you lower your wrist and raise it again, or you turn your wrist really fast as if you're opening a door, and yet nothing happens. Eventually, you tap on the display or press a button to wake the watch. It's a dance that's even more complicated if your hands are full.

That routine is all but gone with the Series 5. After you lower your wrist, everything on the display gets a little smaller, and the display's brightness lowers but remains on, constantly displaying all the information you deem important enough to add as a complication to your watchfaces.

With Series 5, I can passively check the time, instead of actively checking the time. A quick glance, and I'm back doing whatever task is in front of me at the time.

That awkward routine of checking the time on previous-generation Apple Watches isn't completely gone, however. But instead of going through it to check the time, I randomly feel a tap for a new notification, and raise my wrist to view it, only for the watchface to remain visible. It's not until after I tap on the screen that the watch truly wakes up and the notification is shown.

I don't know what's more frustrating: Not being able to check the time, or seeing the time instead of notification.

Still, adding an always-on display makes the Apple Watch feel like more than just an iPhone accessory or a gadget. It feels like a real watch now.

For me, it's the same battery life

With a screen that never turns off, it's natural to have a concern about the impact on battery life. When the Series 5 was announced, Apple stated that it kept the same 18-hour battery life as previous models, and over the past two weeks, that's what I've experienced.

Actually, let me clarify: I didn't measure 18 hours of use, but at the end of each day, I would place the Series 5 on its charger with around 30% battery left. That's in line with what I've experienced on the Series 4 model for the past year.

I've seen headlines from other reviews that state battery life is worse, and that getting through a full day of use isn't possible with AOD turned on. In the end, there are a lot of variables at play here, and let's be honest, iOS 13 and WatchOS 6 have had their fair share of bugs and issues. I've had a lot of issues just getting Apple Watch apps to install,

Hopefully, Apple can figure out what's causing others to see decreased battery life and fix it in a future update. For me, though, I'm happy with the battery life of the Series 5.

In addition to the AOD, you're getting a bigger screen, fall detection, and Apple's ECG app for detecting irregular heart rhythms. For me, my money's on peace of mind, a watch that feels like a watch, and the larger display.