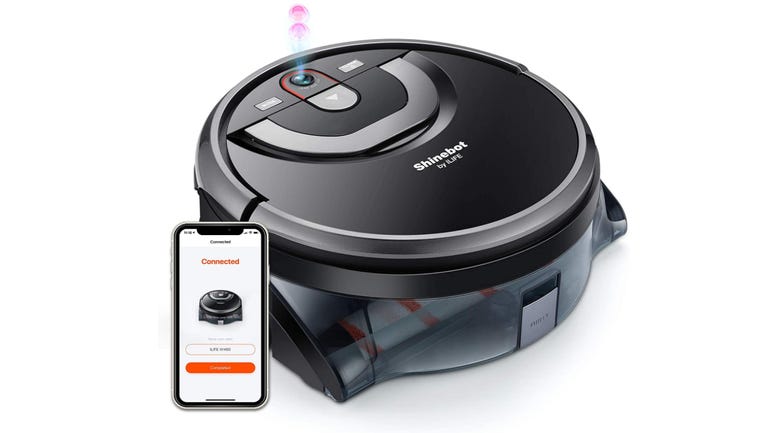 I absolutely loved the Shinebot W400 I reviewed a while ago, so I was looking forward to giving the ILIFE Shinebot W450 a whirl.

The Shinebot W450 from ILIFE is a single function machine. It will wash and scrub your floor — but it will not vacuum it at the same time.

Unlike most multi-function robots, the Shinebot W450 does not just wipe dirty water around the floor It has two tanks: 0.8 litres for clean water and 0.9 litres for dirty.

The Shinebot W450 has a scanner at the top of the unit to map the floor area, and it will avoid mopping and scrubbing the same area constantly. The map also makes sure that all parts of the room are covered in its cleaning path.

The tanks module is in a simple one-handed unit, which is easy to lift and replace on the body of the robot.

Press the arrow button, lift the tanks module off, turn the module upside down to fill with fresh water and the supplied cleaning fluid, or lift the stopper on the side of the unit to empty the dirty water from the tank and rinse it out under the tap.

To use, lift the robot off its docking base (there is a lip all around the base, so you must lift it up and set it in position), put it on the floor, and start cleaning.

The roller brush has a spiral of scrubbing brush fibres to make sure that harder-to-remove stains are lifted on the first pass.

The Shinebot W450 has an app, too, which lets you modify the amount of water delivered to the floor, the travel speed, and the roller brush speed. You can download the app from the app store, add your robot, and configure the settings you need.

However, I had issues connecting the robot to the app. The W450 would not connect to the app using any of my 2.4GHz access points apart from my main dual-band router. Once I had connected the W450 to the router and moved the robot to a hard flooring area, the app would not communicate with the robot to start or stop it.

Moving the W450 away from my main router into another section of the house with a dual-band mesh meant the app showed the robot was offline. Only by moving the robot closer to the main router, rebooting the Shinebot W450, and trying again appeared to work.

I must have added the robot 15 times before I gave up.

If I closed the app and opened it again, I would have to go through the entire rigmarole of adding a new robot. It was incredibly frustrating, and I'm not surprised that people give up on apps.

As you can see in the screenshots below, it took 20 minutes to get a successful enough connection to show the online status of the W450.

On lucky occasions, the robot connected immediately, giving me the chance to take screenshots of the session. I did manage to move it away from a 2.4GHz router, off the carpet, and onto a hard flooring area to wash.

There are minimal settings you can change using the app, and, aside from watching its progress when it is moving, I do not see the benefit in the app, especially as it was so difficult to add the robot to the app.

However, the Shinebot W450 goes on and on before the battery gets low. It did every hard floor in my house twice before I had to take it back to the charging dock. This is impressive; ILIFE says that the W450 will clean for over 80 minutes. I managed to clean for longer than this on full power.

I am dubious about two-in-one robot vacuums, as they spread dirt across the entire floor with a wet mop before it's left to dry again. Only robots that have two tanks can properly clean the floor, and the W450 certainly does clean the floor well and collects the dirty water again. My floor looks clean after just one pass.

For under $300, the ILIFE Shinebot W450 is excellent at cleaning hard floors with little human assistance. Set the water flow, travel speed, and brush speed in the app; leave the app alone afterward to avoid any tech heartache. You can then enjoy clean floors every time you lift the robot from its dock and set it on its cleaning cycle.