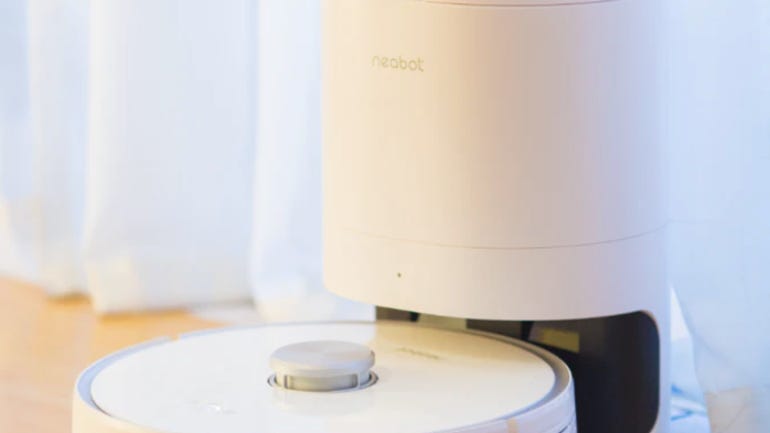 I have tried a lot of robot vacuums over the last few years, but the Neabot's dust collection feature is the cleverest thing I have seen so far.

The robot vacuums are getting cleverer. From the ILife floor washing Shinebot, to the incredibly clever object-recognizing mopping and cleaning Deebot Ozmo T8 AIVI, to the pet poop-avoiding, sweeping, and mopping Roborock S6 MaxV, there is some incredibly clever tech out there.

But the Neabot has a feature that none of the other robots I have seen so far have. The Neabot empties its on-board dustbin into a large hopper, meaning that trips to empty the dustbin are few and far between.

The dustbag is an eco-friendly material and fixed to the hopper with a cardboard insert. When you lift the insert, a sliding cover ensures that you do not spill any dust.

Currently, once the bag is full, it is discarded, but Neabot hopes to use more environmentally solutions in the future.

Within a few days of launching on Kickstarter, the Neabot smashed its original target of $20,000 and currently has pledges of over $150,000

The Neabot has three levels of suction: Silent mode (700Pa), regular mode (1200Pa), and strong suction mode (2700Pa). In use, the vacuum noise is similar to other robot vacuums I have tried. Only when the robot dustbin is being emptied is there a noticeable noise increase.

You can configure the Neabot to empty its on-board dustbin after every sweep, every second, or every third time it has returned to its dock.

When the Neabot approaches the docking station, it swivels around by 180 degrees to back itself into the dock -- rather like a car reversing into a parking slot.

Then, when the Neabot is in the correct position, a powerful suction fan sucks out all of the dust from the onboard dustbin and deposits it in its bag in the hopper. The robot then swivels round to face the dock for charging.

To take advantage of the Neabot functionality, you need an app. I used an early beta version of the app, which is not yet on the Play Store as it is still in development.

Even though the app install was in Chinese, the set up was logical enough for me to work my way through, including pairing and changing the app language to English. From there, I could configure power settings and schedule the cleaning routines.

You can set different schedules for cleaning. I set the robot to clean three times per day so I could test when it returned to the dock to recharge mid-clean before going out again to finish.

Setting schedules was frustrating. Setting a different time for an afternoon sweep reverted all of the times to GMT -- not summer time. Also, setting the no-disturb feature changes time settings. However, I used an early beta version of the app, so I am confident that all documentation, maps, and other glitches will be sorted out by the time the product launches in late June.

You can set no-go zones that the robot will avoid, but currently, you can not set different areas to clean at different times.

One feature that I did find annoying was the hopper white light. The app can switch off the light and adjust the volume of the alerts.

This setting only switches off the pulsing light on the robot. If you have the Neabot in your bedroom, the hopper light will annoy you if you like to sleep in total darkness.

However, it behaves as a nightlight if you need to move around the darkened room at night. If the robot is in the living room, the light is unobtrusive, and you will only notice the flashing orange light when there is an issue.

Apart from these minor glitches, the Neabot is a superb vacuum with an ingenious hopper feature promising to free you up from the daily task of emptying your dustbin.

I am sure it will be the first of many disruptive innovations across the robot vacuum space. I am looking forward to what will be next.