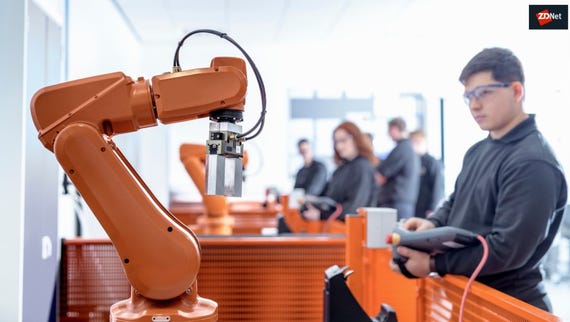 Collaborative robots, usually called cobots, are now the fastest growing segment of industrial automation and are expected to make up 34% of all industrial robot sales (a ten-fold increase) by 2025. Universal Robots (UR), the company that helped pioneer the market -- one that was largely nonexistent a decade ago -- just announced its 25,000th cobot sale.

The news coincides with the start of the International Manufacturing Technology Show (IMTS), which began today.

Universal Robots has a 60 percent share of the cobot market, but rapid maturity in the sector has attracted plenty of rivals. In a topsy turvy scramble for share that parallels the hardware wars in personal computing, now-established brands like UR, ABB, Fanuc, and Rethink Robotics are competing with one another while newer entries like Locus and Vecna fill out the sector.

The exhibitor hall at IMTS is crammed with human-scale robots that can safely operate outside cages and alongside humans, doing everything from welding and pick & place to ferrying cargo around warehouses and across factory floors. The accelerated pace of adoption has created a large secondary market for robotic grippers and end effectors, as well as alliances between hardware companies and UX developers who are helping lower the barriers to entry to program and operate these robots.

Cobots are designed to work with humans and not replace them, as publicity and marketing teams at these companies are quick to point out.

"The cobots didn't replace any employees," says Peter Felke, President of Kay Manufacturing, which purchased UR's 25,000th unit, in a joint statement with UR. "We were able to meet increased production demand with our existing work force, and we saved twenty minutes of operator time per hour, all while improving our ergonomic work environment and freeing up our staff to handle more value-added tasks."

At this phase, that's probably to be expected. Faced with a tight labor market and booming economy, small and mid-sized manufacturers are turning to cobots to help get the most out of their skilled workforce. But it's also impossible to miss the economic argument being touted, which usually takes the form of an annual labor cost savings.

Kay Manufacturing estimates that figure at $150,000 with their new UR cobot. So far, that cost savings is enabling companies like Kay to take on more demand. As the market matures, and as the currently strong economy inevitably slows in years ahead, demand for manufactured goods will also slow.

In that scenario, it's easy to imagine that technology investment will start to become more of an either/or proposition where workers are concerned.

At this stage, at least, the point is academic. Employment is strong and the industrial automation market is red hot. Neither is likely to change in the foreseeable future.

In the murky yonder, though, there are genuine labor challenges brewing. Milestones like this will likely be seen as bellwethers in the postmortem.