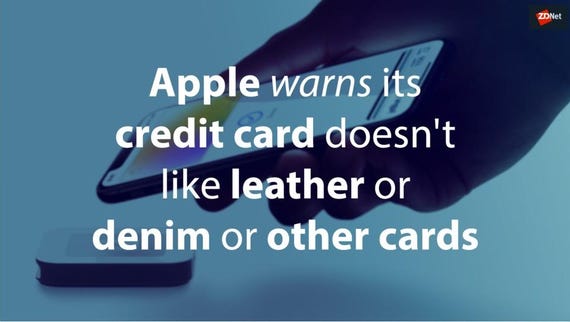 Apple Card issuer Goldman Sachs is facing an inquiry following claims that Apple Card is being offered with substantially higher credit limits for men than women.

"My wife and I filed joint tax returns, live in a community-property state, and have been married for a long time," Heinemeier Hansson said. "Yet Apple's black box algorithm thinks I deserve 20x the credit limit she does. No appeals work."

After speaking to Apple representatives, his wife's credit balance was improved, but she found that the algorithm behind the decision was blamed time and time again -- despite her credit score apparently being higher than her husband's.

"Apple Card is a sexist program," Heinemeier Hansson continued. "It does not matter what the intent of individual Apple reps are, it matters what THE ALGORITHM they've placed their complete faith in does. And what it does is discriminate."

As the Twitter thread gained traction over the weekend, Apple co-founder Steve Wozniak chimed in, saying that the same thing happened with him and his partner. The couple has no separate bank accounts, credit card accounts, or assets.

Backed by Mastercard, Apple Card was launched in partnership with New York-based Goldman Sachs in August. Marketed as a "new kind of credit card, created by Apple, not a bank," Apple Card is intended as a means to give customers a better handle on their spending with summaries, purchase tracking, and schedule reminders.

The allegations have resulted in an internal investigation, as well as an external inquiry by the New York Department of Financial Services. Speaking to Bloomberg, a spokesperson said, "the department will be conducting an investigation to determine whether New York law was violated and ensure all consumers are treated equally regardless of sex."

Andrew Williams, a Goldman Sachs spokesperson, said that each application is "evaluated independently" and this includes an "individual's income and an individual's creditworthiness, which includes factors like personal credit scores, how much debt you have, and how that debt has been managed."

"In all cases, we have not and will not make decisions based on factors like gender," the spokesperson added.

However, even in light of the claims made by Heinemeier Hansson, Wozniak, and others, there has been no mention of investigating potential gender bias in the underlying algorithm used for credit decisions.

ZDNet reached out to Apple for comment but has not heard back at the time of publication.