Full Bio
Posted in Between the Lines on September 12, 2017 | Topic: Mobility 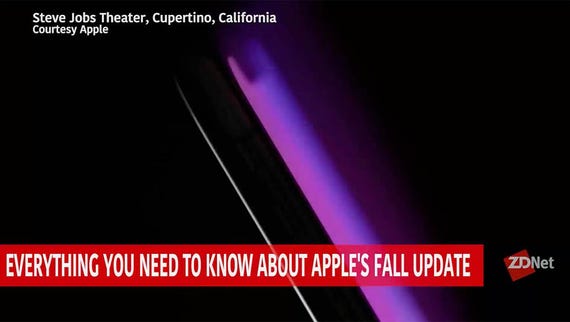 Apple has launched its trio of 10th anniversary devices: iPhone 8, iPhone 8 Plus, and iPhone X.

That latter one may stretch your wallet, with a starting price of $999, and potentially make it more difficult to get your company to buy you one or bring your own to work. But Apple is gunning for the next decade of the smartphone while holding the $1,000 smartphone line.

The big question is whether facial recognition and animated emojis will justify the premium of the iPhone X.

CEO Tim Cook noted that "no other device in our lifetime has had the impact on our world like the iPhone." It's hard to argue with Cook's take given smartphones are all multi-touch and have app stores. And, yes, Apple has become the most profitable company on the planet.

Apple's event at the new Steve Jobs Theater was about extending the iPhone into what's next, such as augmented reality, but don't get carried away. The company may have devices like the Apple Watch and has moved into services, but the iPhone carries the day.

This round of iPhones is critical to Apple, as the devices are set to launch what analysts dub a "super cycle." To Wall Street, the next iPhone cycle will determine whether Apple can become the first company valued at $1 trillion. Apple was worth $834 billion ahead of the iPhone event. For Apple, the 10th anniversary iPhone sets the stage for new services, augmented reality, and a bevy of other tools that may take it beyond the smartphone. Apple Watch is one installment on that device roadmap.

Phil Schiller, Apple's marketing chief, outlined the iPhone 8 duo -- and perhaps the biggest spec update is the A11 Bionic processor. The CPU has six cores and is built to handle artificial intelligence and compute heavy tasks. The GPU is for 3D apps and games and is also built for machine learning tasks. In other words, Siri will be smarter.

Apple also touted dual cameras on the iPhone 8 Plus and the 12-megapixel camera on the iPhone 8. A feature called Portrait Lighting changes the lighting effect on the photo with real-time analysis via machine learning.

As for those new True Tone displays, the iPhone 8 Plus has a 5.5-inch display, with the smaller version coming in at 4.7 inches.

Schiller also touted new sensors for augmented reality as well as a series of AR apps. Apple's new hardware can integrate data and superimpose it over live places: "Each iPhone is custom tuned for AR," said Schiller.

Add it up and the specs behind the iPhone 8 are all about prepping it for AR and blending it with the real world. The iPhone 8 also supports LTE Advanced and wireless charging based on Qi. Chargers will be built throughout cars, shops, retailers, and airports.

The iPhone X is more about the sheer bragging rights. Apple said iPhone X will change the future of the smartphone, and Cook noted that the company is aiming for the "next decade with this phone."

He said: "The first iPhone revolutionized the first decade of the technology. Ten years later it's only fitting to reveal a product that will set the stage for the next decade." Nevertheless, the iPhone X contains many of the same internal technology as the iPhone 8 and iPhone 8 Plus.

The iPhone X is also about augmented reality. Aside from the games, Apple has worked with Snapchat to enable better masks and facial recognition tracking. Animoji is another key perk that may entice people to buy if you're willing to bet that emojis will trump budgets. What Apple is doing is backing up its AR efforts with better hardware across its iPhone line.

Apple also will upgrade its cameras and sensors on the iPhone X, but it sticks with dual 12-megapixel sensors with f 1.8 and 2.4 apertures. Apple also added OIS to both cameras this time with a better quad-LED flash.

The iPhone 8 cameras will also be calibrated for AR, with low light and an improved gyroscope and accelerometer for better motion tracking.

Apple AirPower charging accessory for iPhone, Watch to launch in 2018

When it launches next year, the AirPower will allow iPhone 8, iPhone 8 Plus or iPhone X customers to simultaneously charge up to three devices, including Apple Watch Series 3 and a new optional wireless charging case for AirPods.

Apple will release iOS 11 for iPhone, iPad on September 19

Apple will allow the masses to update to the latest iOS soon, adding a new Control Center, new AR features, and more.

Join Discussion for: ​Apple launches iPhone 8 and aims for next...