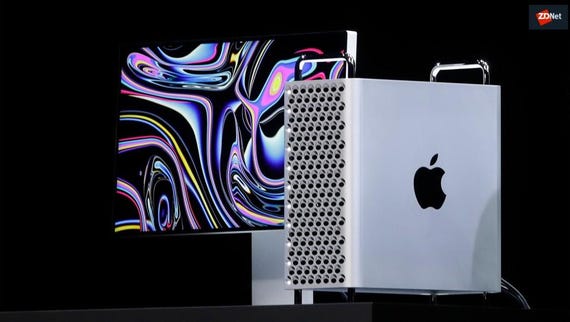 Apple has been making more of an effort to reach out to its professional users in recent months, with a series of updates to the MacBook Pro range, including an entirely new 16-inch model that was introduced at the end of 2019. But, of course, the missing piece of that particular puzzle has been the new Mac Pro -- the desktop tower system announced by Apple last summer, but then delayed until the end of last year.

Apple had been without a desktop offering for its professional users for several years, having designed itself into a corner with the cylindrical 'trashcan' Mac Pro that it launched in 2013. There was a 'pro' version of the all-in-one iMac released in 2017, but that was clearly intended as a stop-gap while the ever-secretive company publicly dropped hints that it was completely rethinking its approach for the Mac Pro.

Even before the announcement of the Mac Pro at last year's WWDC, Apple executives had been dropping the word 'modular' into some of their public comments, so it came as no surprise to see that the new Mac Pro reverted to a more conventional tower design (not unlike the popular Mac Pro tower system that it abandoned in 2013).

You could also throw in Apple's new 32-inch Pro Display XDR with 6K resolution, along with its glare-reducing nano-texture glass upgrade and 'pro' stand -- the ability to adjust the height and tilt of the display are 'pro' features, according to Apple. That brings the fully-loaded price of the Mac Pro to a princely £52,807 inc. VAT (£44,005.83 ex. VAT, or $58,397).

The sheer cost of the new Mac Pro might explain Apple's reluctance to provide review units to ZDNet and other media outlets. Indeed, the company's over-protective instincts even led it to forbid photography at the recent demo session we attended in London (although Apple did provide some photography of its own after the event).

"Yes, it's a more expensive machine," said Thomas Grove Carter of Trim Editing, who demonstrated the Mac Pro at the event. "But it's allowing us to do things we couldn't do before." Including, according to Carter, working with multiple streams of 8K video for multi-angle editing.

That was echoed by James Rodgers of Lunar Animation, who provided a more numerical indication of the new system's performance. One of Lunar's current projects uses Autodesk's Maya animation software to create a scene in which a Skeleton 'god' raises skeletal minions from the ground. Using an older iMac Pro only allowed Lunar's designers to depict the god and two minions, while the new Mac Pro allowed the Skeleton god to surround himself with a more imposing horde of eight minions. And, putting the price of the Mac Pro into perspective, Rogers also pointed out that the Maya software itself requires an annual subscription of £1,782 inc. VAT (£1,485 ex. VAT, or $1,545), with some CAD software packages being even more expensive.

There's no denying that the new Mac Pro provides impressive performance for professional users. All that remains now is for Apple to convince those users that it's serious about the pro market once again -- after years of focusing all its efforts on the all-conquering iPhone.

Inside the $6k Mac Pro, the most repairable Apple product around