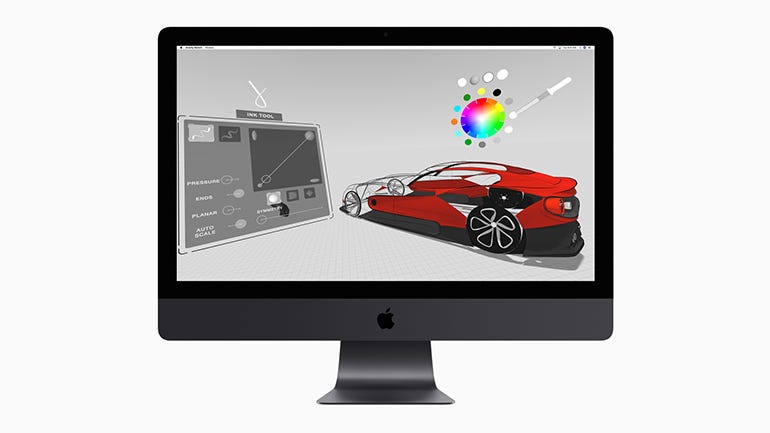 Apple unveiled the new iMac Pro at its World Wide Developer Conference last June, and the high-end AIO desktop subsequently shipped in small volumes -- more or less on schedule -- towards the end of December last year. But, aware of the unease among its professional customers following the mixed reception for the most recent MacBook Pro updates, and the admission that it is "completely rethinking the Mac Pro" range, Apple has kept this new workstation-level iMac closely under wraps and has only allowed limited access to the press.

But, in early February, just as the most powerful 18-core configuration began to reach customers, Apple provided more detailed briefings to ZDNet and other publications. The burning question is whether this latest incarnation of the veteran iMac can win over demanding professional users -- or at least hold the fort until Apple's plans for a revamped Mac Pro bear fruit.

Superficially, the iMac Pro is virtually identical to the standard 27-inch models that have been available for several years, with the same physical dimensions and 5K Retina display, and only the new 'space grey' colour scheme to set it apart from its predecessors.

Internally, though, the iMac Pro is a completely different beast. Apple claims that removing the conventional hard drive used in previous models has saved a lot of space inside the unit, which is now devoted to an enhanced cooling system for the high-end CPU and GPU configurations that are available.

Apple claims that even the standard configuration of the iMac Pro is considerably more powerful than any of the existing quad-core iMac models, offering 3.4x performance for 3D graphics and visualization, 5x improvement for scientific modelling and simulations, as well as the ability to edit eight streams of 4K video at full resolution and in real time.

Our own tests confirm that the iMac Pro significantly outperforms previous versions of the iMac. Single-core performance for the 3.2GHz Xeon W is nothing special, with Geekbench 4.2 recording a score of 5134 that's only slightly faster than last year's standard 27-inch 3.4GHz Core i5 iMac. But while the quad-core iMac achieves a multi-core score of 14,000, the 8-core iMac Pro races ahead with 31,400. The solid-state drive performs strongly too, with write and read speeds of 3,020MB/s and 2,487MB/s respectively.

Our Cinebench R15 video test results are more mixed, with 120fps for the iMac Pro compared to 99.5fps for the standard iMac. That might not seem to justify the far higher price of the iMac Pro -- and for some tasks, the dual-GPU configuration of the existing Mac Pro might still have advantages. However, Cinebench doesn't fully reflect the multi-tasking capabilities of the 8-core Xeon W, which excels at tasks such as simultaneously handling multiple streams of 4K video, or performing 360-degree video editing for VR content in Apple's recently updated Final Cut Pro X. And, at long last, Apple has quite pointedly been offering journalists the chance to wear the HTC Vive headset during demo sessions with the iMac Pro, as a way of letting everyone know that it has indeed released 'a good computer' that can actually handle VR.

The iMac Pro will certainly be tempting for existing iMac users who have been waiting for a high-end pro upgrade (other than the effectively obsolete Mac Pro). But it's not all good news. Like the MacBook Pro, the iMac Pro lacks even the option for simple memory upgrades, as the back-panel slot that provided access to the memory slots on other iMac models has now been eliminated, so it's advisable to budget for as much memory as you can afford at the time of purchase.

However, the iMac Pro doesn't actually have its memory soldered onto the motherboard, so an adventurous IT manager who is prepared to separate the front and back panels could perform their own upgrades and repairs if necessary. And, as the brave team at iFixit have reported in their latest teardown, it seems that even the Xeon W processor could potentially be replaced as well.

That's not the case with the Vega 56 GPU, though, which is firmly soldered into place. On the plus side, Apple has announced that it's planning an update for the current macOS High Sierra that will support the use of external GPUs for the first time. That will provide an important upgrade path that the iMac has previously lacked, helping to ensure that this expensive piece of kit continues to earn its keep for years to come.

Its all-in-one design and lack of internal expansion won't suit all professional users, but the iMac Pro does go a long way to restoring the credibility of Apple's professional desktop line-up.

The impressive 5K display and significantly improved performance mean that the iMac Pro is well suited to specific tasks such as high-end video-editing, 3D design and visualisation -- and even VR content creation at long last. However, Apple still has its work cut out to deliver the more 'modular' replacement for the existing Mac Pro that it has promised for later this year. 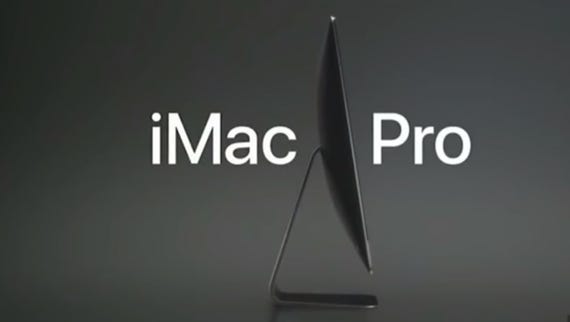 The new iMac Pro is actually cheaper than the original Mac
The iMac Pro is Apple's most powerful, and most expensive computer. Even so, you may be surprised to learn that it is comparatively less expensive than the first Mac. And the difference in performance? Just wow.

Apple iMac 27-inch with Retina 5K display (2017): CPU and GPU upgrades deliver better value for money
Some iMac owners may be tempted to wait for the forthcoming iMac Pro, but this 2017 update proves that the veteran iMac is still alive and kicking.

Build yourself a Windows-powered iMac Pro clone
Like the look of Apple's new iMac Pro workstation, but you're a Windows user so macOS is a no-go zone for you? No worries! You can get all the power and performance of the iMac Pro while still being able to run Windows.

iMac Pro: A cheat sheet for professionals (TechRepublic)
The iMac Pro's impressive specs might redeem Apple with professionals. Here's what business users need to know about the all-in-one machine.