Make no mistake: What Big Blue wants to do is make its cloud more relevant.
Written by Jason Perlow, Senior Technology Editor on Oct. 29, 2018 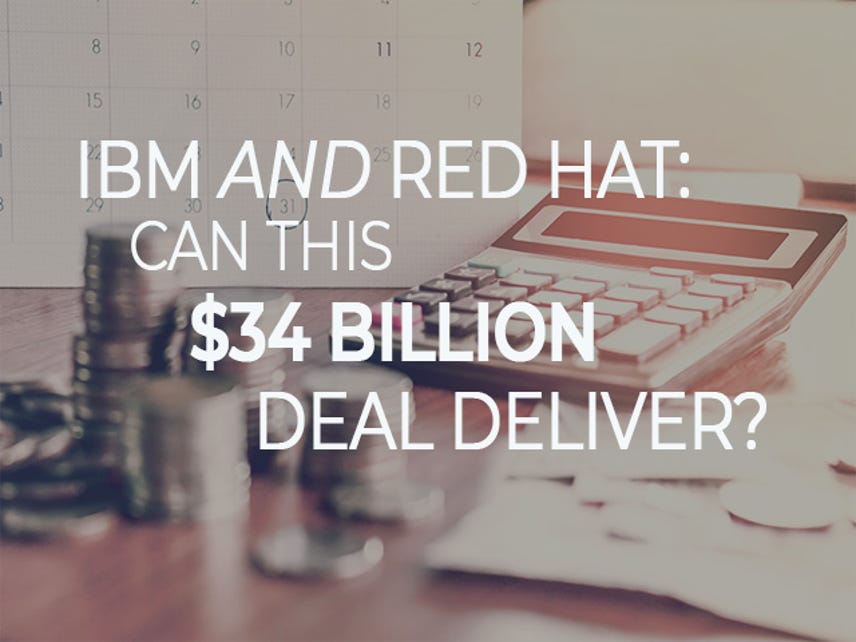 On Sunday, Armonk, New York-based IBM announced that it would be buying Raleigh, North Carolina-based Red Hat for $34 billion -- the largest acquisition in the company's 100+-year history. This seems like too much -- too late. This should have occurred 10 years ago.

For me, it's a bittersweet announcement: I used to be an IBMer. I worked there from the summer of 2007 to late 2012 as an IT architect in their GTS/ITS division, primarily in their data center optimization and server consolidation practice, and also in their business continuity (BCRS) division. I was involved with a lot of Linux server virtualization and high-performance computing using systems like Red Hat, SuSE and also Ubuntu.

IBM has been a proponent of Open Source, Linux and also a big internal Red Hat fan for a long time. The internal delivery teams had their own version of Red Hat Workstation they ran on their laptops instead of Windows as their primary desktop OS -- although I had a lot of issues using it as such.

They were one of the earliest big corps to throw significant investment dollars at Linux, to the tune of $100M, They've obviously spent a lot more than that over the last 10 years or so. IBM has always been a good citizen in terms of supporting Open Source and Linux -- as long as it has had value to its own productization and marketing efforts.

Despite the braying of anti-business, never-surrender FOSS lunatics, this has always been the correct approach to monetization with Linux -- software and services. And traditionally IBM has been very good at software and services, at least in the last ten years when it transformed itself largely from a hardware-oriented company to more of a strategic and business outsourcing company.

It has never viewed Open Source and Linux as a charity -- which it shouldn't. However, it has protected Linux and the community from aggressive patent litigation, such as with the SCO lawsuit, and has never weaponized any of its many many own patents against its customers or the Open Source community.

A lot of us internally at IBM during my tenure there petitioned management to make some sort of Linux distribution purchase, such as Red Hat, Canonical, or SuSE. But we always got the same response -- "we shouldn't own a distribution, we need to support all of them and be agnostic."

A lot has happened in the last 10 years. Android happened. IoT and the embedded Linux platforms that run on it happened. Amazon Web Services exploded, and so has the cloud.

Microsoft has transformed itself from a clear aggressor in the Open Source space to practically an Open Source company itself. In fact, Redmond made Windows itself Linux-compatible and Azure a major cloud player where more than half the workloads on it are in fact, Linux and Open Source based. SQL Server now runs on Linux. Azure Sphere, their IoT platform, uses a Microsoft-tuned Linux kernel.

And it has joined OIN and its entire patent portfolio is now Open Source.

IBM was, and still is, a major Open Source and Linux benefactor. But people have short memories. As does Wall Street.

Although it is not the most popular Linux distribution worldwide -- that distinction goes to the Debian-based Ubuntu made by Canonical -- Red Hat Enterprise Linux (RHEL) is by far the most well-supported and heavily used enterprise Linux distribution. And its Fedora and CentOS derivatives, which are completely free to use, are also heavily used in web hosting and cloud-based applications as well as in the scientific and engineering community. And of course, Oracle Linux which runs on the company's Exadata systems, is also based on RHEL.

So the enterprise footprint of RHEL and its Open Source family members is huge. The IBM purchase affects a massive swath of territory.

I'm not really concerned about IBM supporting Red Hat customers that do not use the company's own server hardware. IBM isn't really in the x86 business anymore as they sold that entire line to Lenovo a few years back, and their mainframe and big iron business with System z and POWER are very boutique.

They will support x86 customers just fine. In fact, this is a great development for those customers, and I think it may actually improve Red Hat's support processes.

We should also not forget that Red Hat also owns JBoss, and IBM is a huge J2EE shop with its WebSphere stack. That will also add additional sanity. Red Hat also has some good containerization technology for Linux and cloud orchestration and management with its OpenStack platform as well.

What I am concerned about is customers that use Red Hat and its software on clouds other than IBM's, which has been struggling for relevancy in comparison to Amazon AWS, Microsoft Azure, Google Cloud Platform, and also Oracle Cloud.

IBM actually makes a lot of money from its cloud business -- but it's mostly with its legacy customers and it isn't really attracting new customers that don't already have a strong relationship with the company already in strategic outsourcing, professional services, and big iron.

So no, I'm not concerned so much about Red Hat as a distribution and its core technologies becoming weaponized against customers that use them on-premises. That's not going to happen. The support is going to be just fine and it will almost certainly be business as usual.

I am not even necessarily expecting the support licenses to become more expensive, either -- although I haven't had good vibes from Rometty and Co. when it comes to that kind of stuff in a long time.

What I do see happening is the IBM cloudification of Red Hat's stuff and IBM pitching their cloud as the home for Red Hat Enterprise Linux workloads in the cloud. Customers running on AWS, Azure, Google Cloud Platform -- and yes, Oracle -- are now second-class citizens. The vendor finger-pointing is going to start anytime soon now. It will start whenever shops using the public clouds that compete with IBM's (and who are not legacy customers of their other products) have a support issue. When that happens, Amazon, Microsoft and yes, Google and Oracle are going to have to fire back.

And despite the fact that it isn't currently on the block and Mark Shuttleworth isn't ready to sell, I think Canonical and Ubuntu are certainly now up for grabs. So is SuSE.

And I expect that Debian as well will end up under the tutelage and mentorship of one of the major companies, even though it cannot really be bought. And it may also be time for the above cloud players -- in an act of solidarity -- to come up with a new, born-in-the-cloud Linux distribution that is standardized and has real enterprise support legs.

The Linux distribution fiefdoms are the next battleground in a cloud war. Who will emerge as the winner? Talk Back and Let Me Know.