AWS Sumerian: A bet that enterprise augmented and virtual reality will be browser-based

Amazon Web Services is aiming to simplify AR and VR development for the enterprise and give business use cases a big boost. Here's a look at some early efforts.
Written by Larry Dignan on April 3, 2018 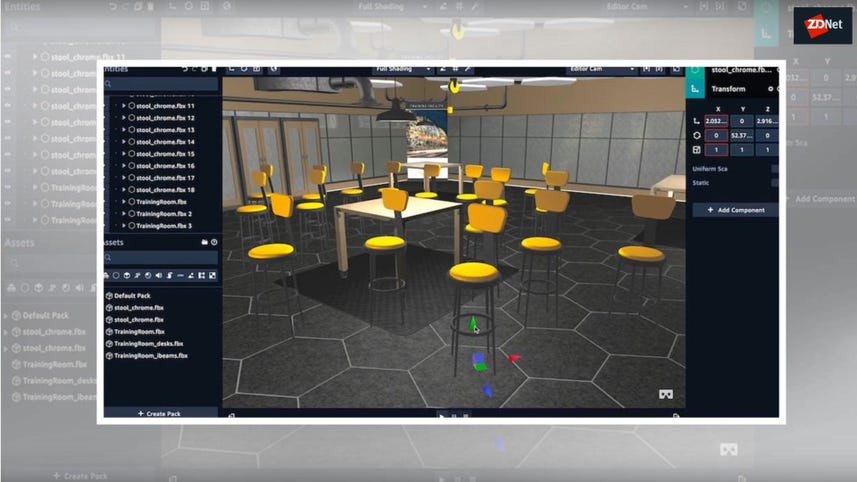 Video: Sumerian: Amazon bets enterprise use of AR and VR will be browser-based

Amazon Web Services Sumerian service is a big bet that the future of virtual and augmented reality applications will run through a web browser and upcoming standard called WebXR.

The virtual reality platforms from HTC Vive and Facebook's Oculus require expertise that enterprises don't have at the ready. In addition, tools like Unity are great for 3D rendering and games, but enterprises will have a hard time finding enough use cases to warrant investment.

AWS' bet is that Sumerian and an interface that simplifies steps will garner enterprise usage. Sumerian, outlined at re:Invent last year, integrates with AWS' Polly voice platform as well as Lex, the engine behind Alexa.

Here's a look at the Sumerian interface and hosts:

At AWS' Loft in New York City, a few enterprises, which were using Sumerian in beta, outlined use cases. The common refrain is that Sumerian brought costs down on development time and made it easier to experiment with VR and AR because the app building process wasn't as intensive as other tools they've used.

Kyle Roche, general manager of AWS AR/VR, said the use cases emerging for Sumerian include digital signage and "hosts" that can provide contextual experiences via text to speech, computer vision, and other services. Think of a cruise line using a host to interact with customers. Or training applications. Or education.

"With AR we are looking to consolidate editing and drive scenes from a URL," said Roche. "Once AR and VR are in a browser there will be more enterprise use cases."

Sumerian will compete with ARKit from Apple as well as AR Core in Android. Those efforts are focused on mobile and apps. Here's how AWS is looking to make AR development easier:

AWS is so serious about AR, VR and Sumerian that it's involved with the W3C standards group for one of the first times. The WebXR API is designed to cover VR and AR as well as unify a spectrum of immersive computing. The WebXR standard is now in Github under an Immersive Web Community Group run by W3C's community and business group.

For Olivier Vincent, president and general manager of WeatherBug, AWS Sumerian and its integrated services are an entry to new forms of storytelling. WeatherBug is using Sumerian hosts to provide local forecasts to the zip code as a human weather person would do for larger cities. "Sumerian allows us to tell the stories of weather data with storytelling and emotions," explained Vincent. "We talk about how we feel about the weather as much as the data."

TechRepublic: 5 steps CXOs can take to enable AR and VR training for employees | Are AR and VR training technologies ready for the enterprise? | Why building AR apps could put developers on the cutting edge of digital content | Tech Pro Research: Virtual and augmented reality policy

WeatherBug's plan is to bring back the weather person at scale, said Vincent. Sumerian as well as its text to speech services mean that there can be hundreds of thousands of weather forecasts given via 3D, AR and VR. "We just can't give forecasts for every city in the world with humans," said Vincent.

According to Vincent, WeatherBug has been playing with the 3D model view of the weather and AR for a while, but AWS enabled the company's plans to accelerate. Developers are now spending most of their time perfecting assets that a host will use on the set (props, models, lighting, etc.,) instead of coding. WeatherBug started to use Apple's SceneKit for IoS but the platform required too much expertise to create 3D scenes. "Sumerian provides us a level of abstraction that's easier to scale," he said.

Bryan Chascko, Electronic Care Giver CTO, built Addison, a 3D persona that serves as a virtual health assistant, before Sumerian was available for testing, but ultimately intends to move his service to AWS.

Addison Care and Electronic Care Giver are units of SameDay Security, a Las Cruces, New Mexico-based alarm company that has branched out into virtual health monitoring. Addison is a virtual care giver that can monitor a person's health in the home as well as assess gait and risk of someone falling. Accidental falls are a big threat to in-home health. Chascko said Addison was initial built with video game engines and 3D modeling software that was complex.

Meanwhile, Addison Care had to integrate aspects of artificial intelligence, machine vision and machine learning. AWS' Sumerian has those services integrated so adding decision trees to Addison is now easier. Addison Care is rolling out to pharmacies for evaluations too. That use case is akin to what a hospitality group would use with Sumerian's hosts.

"We want Addison to have empathy and make a personal connection to the customer," said Chascko. "Sumerian is allowing us to accelerate those connections."