Wall Street was looking for Dell to report non-GAAP second quarter earnings of $1.47 a share on revenue of $23.27 billion.

In a statement, Dell Technologies vice chairman Jeff Clarke said: "We are in the early stages of a technology-led investment cycle. IT spending remains healthy and our business drivers remain strong." 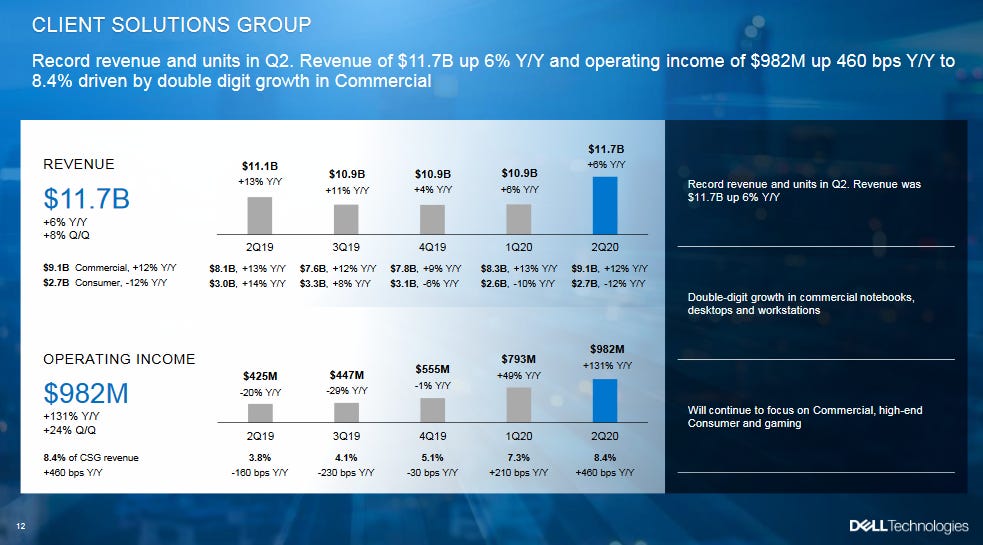 Dell Technologies' infrastructure unit had second quarter revenue of $8.6 billion, down 7% from a year ago. Storage revenue was flat, but servers and networking sales fell 12%. Operating income was $1.1 billion.

The company said that server average selling prices held steady as customers bought higher-end systems. VXRail orders were up 77% in the second quarter compared to a year ago. Dell credited integration with VMware Cloud Foundation for stoking VXRail demand. 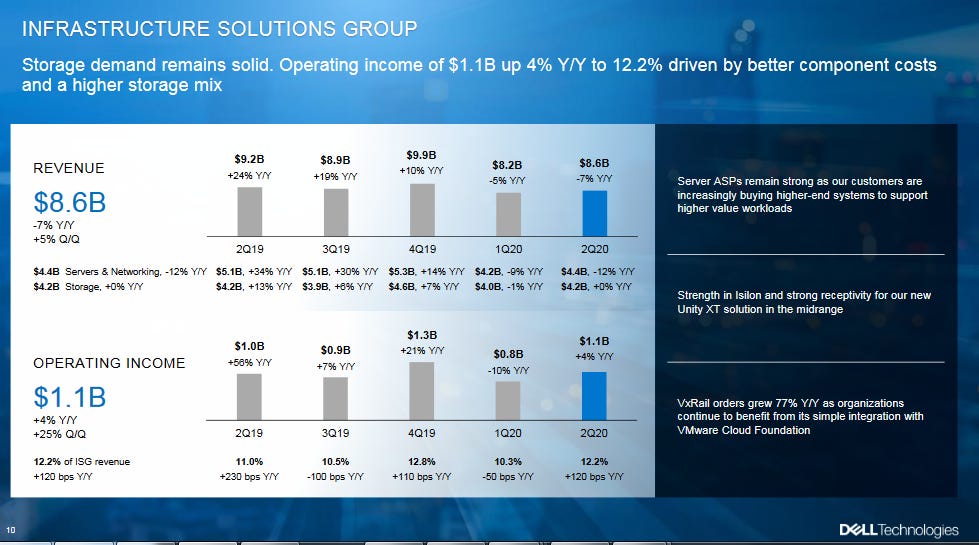 VMware continued to be a cash cow for Dell Technologies with operating income of $762 million on revenue of $2.5 billion in the second quarter.

On a conference call with analysts, Clarke added to his comments about IT spending. He said:

We are in the early stages of a technology-led investment cycle that is accelerating digital transformation. That investment cycle is fueled by the exponential increase in data and data-centric workloads that drive better business outcomes alongside an increasingly diverse and mobile workforce. But to realize these outcomes, customers are grappling with operating environments and infrastructure, including: data proliferation, multi-cloud management, increasing complexity across their security, new software architectures, application, artificial intelligence and machine learning, all the while defining their approach to cloud and increasingly the edge and IoT.

We are optimistic about IT spending because customers need a partner to help them address these challenges, one who is innovating and delivering a comprehensive end-to-end IT strategy.

Dell also said it has been retooling its vast portfolio to integrated cloud services and simplifying the customer experience while paying down debt. Dell said it is on track to pay down about $5 billion in gross debt during fiscal 2020.

The company ended the second quarter with $36.4 billion in core debt, down from $48.8 billion when it closed the purchase of EMC. Total debt including unrestricted subsidiaries was $52.6 billion. "We are committed to de-levering and achieving investment grade ratings," the company said.