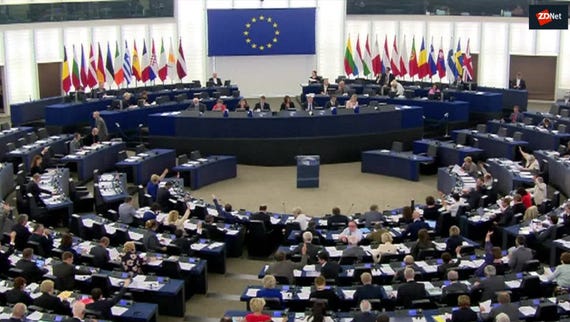 Back to the drawing board for EU copyright overhaul
Watch Now

The European Parliament has voted against a proposed copyright law that is meant to strengthen rules for copyright owners in the age of the internet.

The narrowly defeated European Commission proposal has been pushed back to the European Parliament for further debate and will be revisited in September, by which time sections of the proposal may have been rewritten.

Had it passed in its current form, the law would have required online platforms such as Google, Twitter, and Facebook to monitor potential copyright infringements much more closely, while publishers, media, and artists would have gained more power to enforce copyright.

Opponents say two key articles in the proposal would have effectively killed off memes and other ways people share content online. ZDNet's Steven Vaughan-Nichols argues that the law would "wreck the internet".

However, supporters, such as musicians, believe the law will help close the 'value gap', or the difference between what upload sites and services like Spotify and Apple Music pay artists.

Ahead of yesterday's vote, IFPI published a letter from former Beatles member Paul McCartney imploring MEPs to support the proposal, arguing that upload content platforms "refuse to compensate artists and all music creators fairly for their work, while they exploit it for their own profit".

The key sticking points in the EU Copyright Directive are, Article 11, dubbed the 'link tax' by critics, and Article 13, referred to as upload filters by critics.

Article 11 requires online news aggregators to pay publishers when users share links and obliges users to get a license from a publisher to share snippets of a new story.

Meanwhile, Article 13 would have allowed copyright owners to ask an online platform such as YouTube to monitor for uploads of content, such as music or photos, to prevent them from appearing on their service.

Pirate Party MEP Julia Reda, who led a campaign against the proposal, argued it would have had a chilling effect on freedom of expression while unintentionally endangering projects like Wikipedia and GitHub.

Reda said the result was a "great success" and called on those against upload filters and the link tax to "keep up the pressure" until the issue is revisited in September.

"The European Parliament has sent the copyright law back to the drawing board. All MEPs will get to vote on #uploadfilters and the #linktax September 10-13," she said in tweet.

Mozilla, which campaigned heavily against the proposal, said the result was great news for Europe's citizens.

"The European Parliament has today heard the voice of European citizens and voted against proposals that would have dealt a hammer blow to the open internet in Europe," said Mozilla's head of EU public policy Raegan MacDonald.

"By a clear majority, MEPs have rejected rubber-stamping proposals that would have forced internet companies to filter the web, and would have introduced an unprecedented tax on linking online.

BPI, which represents the UK's music industry and hopes to see the proposed law succeed, said: "We will work with MEPs over the next weeks to explain how the proposed Directive will benefit not just European creativity, but also internet users and the technology sector."

If passed, Article 13 will force all websites to check any and all posts for copyright violations. That will include photos, videos, words, tweets, memes, software code, etc, etc. Think about that for a minute, and shudder.

Article 13, the proposed European Copyright Directive, is being called a war on memes. Here's why.