Through a joint venture worth more than $1 billion, both companies plan to roll out three facilities in Tokyo and Osaka to deliver 138 megawatts of power capacity targeted at hyperscale customers.
Written by Eileen Yu, Contributor on April 21, 2020 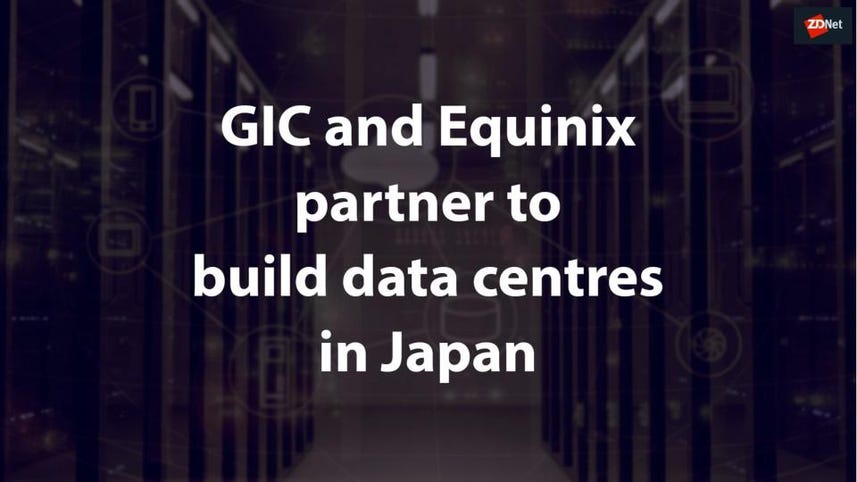 Singapore's sovereign wealth fund GIC and Equinix have inked a partnership to build and operate data centres in Japan. Both companies will invest at least $1 billion into a joint venture and kick off an initial plan to establish three facilities in Tokyo and Osaka, targeting hyperscale customers.

Running on xScale architecture, two of the data centres will be located in Tokyo, Equinix said in a statement Tuesday. When fully built out, all three sites will provide some 138 megawatts of power capacity to the two Japanese cities.

Under the agreement, GIC would own an 80% equity interest in the joint venture and Equinix would own the remaining 20%. The deal is expected to be finalised in the second half of 2020, pending regulatory approval and other closing conditions.

GIC is also expected to contribute cash to fund its 80% equity interest in the joint venture, while Equinix would transfer its Tokyo TY12 and Osaka OS2 development assets -- as well as development rights and land for an additional data centre in Tokyo -- in return for its 20% equity interest and net cash proceeds of at least $100 million.

The two partners last October announced a similar partnership, also involving a $1 billion joint venture, to develop and operate xScale data centres in Europe. Its initial rollout of six sites would be located in London, Frankfurt, Paris, and Amsterdam, with some located on Equinix's existing data centre campuses in these markets.

Noting that Japan was the world's third-largest economy and a regional interconnectivity hub, Equinix said Tokyo housed a large number of global and regional business headquarters and end-user customers have driven demand for hyperscale services. It added that Osaka is the base for Japan's second-highest number of businesses and a hub for startups.

The research firm's head of research Jabez Tan said in the statement that Japan was a strategic country for regional hyperscale expansion and the demand for data centre capacity in the Tokyo and Osaka markets had outstripped supply.

Tan said hyperscale companies looking to expand in the two Japanese cities should aim to drive the adoption of hybrid and multicloud architectures across the region.

Equinix runs 13 data centres in Japan, where it has more than 500 employees.

Citing its own research, the data centre operator said interconnection bandwidth in Asia-Pacific was projected to climb to more than 3,825Tbps by 2022 -- a figure that was 28% larger than Europe. In addition, cloud and IT services in Asia-Pacific are expected to expand at a compound annual growth rate of 50% through to 2022, exceeding growth rates in all other regions worldwide, and hitting a total bandwidth that would be119% larger than EMEA and 49% larger than North America, it said.