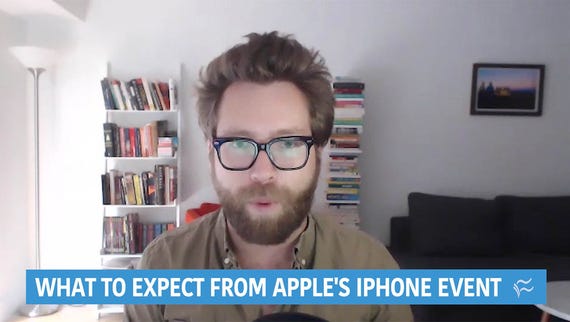 Video: What to expect from Apple's iPhone event

Apple's tenth-anniversary iPhone 8 (or iPhone X, iPhone Pro or whatever it ends up being called) will not only change the future of the iPhone, but also make sweeping changes to the Android ecosystem.

Last time around Apple eliminated the headphone jack, this time it seems that it's the turn of the bezel.

Eliminating -- or getting as close as possible -- to eliminating the bezel is the best way to maximize screen real estate on a device. Problem was, a few years ago this was near to impossible, not only because creating bezel-less displays was impossible, but also the space used up by the bezel gave engineers room to make the device bigger.

What's interesting about the iPhone 8 isn't that it minimizes the bezel, but that it pretty much eliminates it, not just at the sides, but the top and bottom too, essentially turning the smartphone into nothing but a screen.

Stay tuned, because I'm certain that we're going to be seeing a lot more of this design over the coming months.

Like most things that Apple does, augmented reality (AR) isn't new, but its penetration into the mainstream (outside, perhaps, of Pokémon Go) is light enough that for most of the regular, non-techie people who will be watching the iPhone release, it will be something new.

But not for long.

While there's undoubtedly a lot of new and exciting stuff in iOS 11, the most important future from a selling more apps perspective is the ARKit augmented reality functionality, and this is going to be an area that Google isn't going to want Android to fall behind on.

Buttons are out, gestures are in

The elimination of the Home button on the iPhone 8 will be one of the biggest changes to the iPhone that Apple has made over the past decade, and that not only makes the iPhone a screen-only device, but it will replace tapping on a button with gestures.

I'm never a huge fan of making changes to things just for the sake of making a change, and will reserve judgement on whether this is a good or bad idea for now, but one thing that I'm sure of is that there's no doubt that we're going to see this migrate to Android.

A +$1,000 iPhone 8 is, without a doubt, going to change the pricing of premium Android smartphones.

My prediction is that a $1,000+ iPhone will no doubt result in $1,000+ moonshots from the Big Five -- Samsung, Huawei, LG, Lenovo, and Motorola -- and copious amounts of hoping and praying that those premium-priced handsets sell.

But there are also suggestions that Apple could use the windfall from iPhone 8 sales to slash the price of the other iPhones in the lineup, perhaps by as much as $100.

And that sort of thing could seriously upend the Android playing field. Not only would Android handset makers have to respond -- or risk hemorrhaging users to Apple -- but they would need to come up with a way to make sure that doesn't hammer their bottom line (and that's not easy when you consider that most handset makers operate on razor thin margins).

The iPhone 8 is a moonshot. It's part Apple wanting to do something special to mark ten years of the iPhone, but it's also part moving the iPhone along, and part doing something big and bold and attention-grabbing.

It's a moonshot. It could fail. Or it could be massive and redefine the next decade.

Bottom line, in an age where smartphones are all identical looking glass slabs, it will be good to see something new and different, something that pushes the envelope and knocks the competition out of their comfort zones.

The iPhone 8 could be the best thing to happen to smartphones since the iPhone was first released back in 2007.

Once again, Apple is going to change smartphones forever -- by making them more expensive

The tenth-anniversary iPhone 8 may be the most anticipated iPhone to date, but the price tag is likely to make most gasp.

Join Discussion for: How the iPhone 8 will change Android