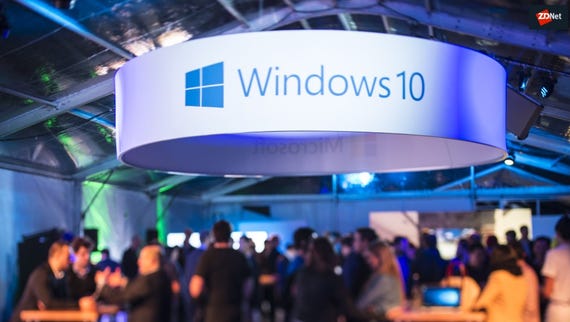 When you install Windows 10 Pro on a new PC and sign in with a local account or a Microsoft account, you get access to all the professional features that you'd expect from a business-class PC operating system.

You also get some unexpected apps splattered onto your Start menu whether you want them or not, including Candy Crush Soda Saga, Bubble Witch 3 Saga, and March of Empires.

These apps appear when you sign into Windows 10 Home or Pro with a local or Microsoft account.

The adjacent screenshot shows the apps that were pushed to my PC after I installed a near final build of Windows 10 Pro, version 1803, and signed in with a local account.

In addition to those three games, Windows 10 downloaded Disney's Magic Kingdoms, Autodesk SketchBook, Dolby Access (offering a free trial of the Atmos surround-sound technology, with the option to pay $15 after the trial period ends), and Spotify Music.

If you're staring at that assortment of apps on a business PC and thinking it looks a lot like crapware, I'm not going to argue with you.

Those apps are preinstalled for purely financial reasons, with the app developers and Microsoft banking on the fact that some percentage of Windows 10 customers will run each app and pay for some sort of extra, like a Spotify music subscription. Microsoft, of course, gets a piece of the action.

Also: Crapware: Why manufacturers install it, what you can do about it, and why it's not going to go away

Don't say that they didn't warn you. In every quarterly and annual report since mid-2015, Microsoft has reminded shareholders and customers that its business plan for Windows 10 includes "new post-license monetization opportunities beyond initial license revenues."

This is a particularly in-your-face example of that monetization strategy.

It's also unfortunate that Microsoft is resorting to some of the same behavior it criticized its OEM partners for a few years ago.

All of those apps can be uninstalled fairly easily, of course. Because they're Store apps, they can't install performance-damaging system files or run processes at startup. Aside from consuming a few megabytes of storage, these preinstalled apps don't even have a trivial impact on system performance.

But it's still annoying that those decidedly un-businesslike game icons have to be removed manually after you've paid a $100 upcharge for Windows 10 Pro.

So how do you avoid having that assortment of apps installed in the first place? Two options are fully supported; not surprisingly, each assumes that you're paying Microsoft for an additional business product or service.

Using either of those options results in a different set of additional apps being installed.

There is, of course, a theoretical anti-crapware argument that some have with any additional apps being installed as part of setting up a new account. But this assortment, at least, feels like it has more of an emphasis on productivity.

Of the eight apps, three were developed by Microsoft and are free: Remote Desktop, Bing Translator, and Office Sway. The others are a grab bag of utilities and productivity tools: Adobe Photoshop Express; Network Speed Test; Eclipse Manager, a free project tracker that offers a $1.99 a month Eclipse Pro subscription; Code Writer, a free text and code editor (shown below); and the language learning tool Duolingo.

If you have an older Windows 10 version than 1803, you might see Power BI (another Microsoft product) or Pandora.

As with the consumer-focused apps, you can uninstall or hide these extra apps with just a few clicks: Scroll through the Apps list on the Start menu until you find the icon of the unwanted app, and then right-click that icon and click Uninstall.

Of course, if you're deploying Windows 10 Pro or Enterprise in a large organization, you have access to specialized tools that let you build a custom image with only the apps you want your users to have. Those without a crew of IT overlords will just have to stay on the lookout for new crapware variants.

PC sales are down. Windows licensing revenue is flat. In its financial disclosures, Microsoft says it's actively looking for new monetization opportunities. Here's where you're likely to be asked to pay up.

Join Discussion for: Avoid Windows 10 crapware: How to get rid...