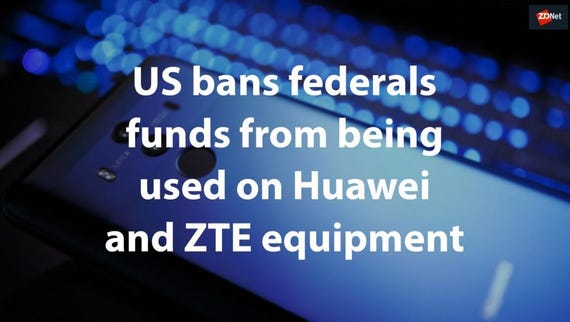 Chinese networking giant Huawei insists that it 'grew up in the UK' and still has a significant role to play in the country's 5G deployment.

Reports have emerged saying that the UK's National Cyber Security Centre (NCSC) is conducting a new review into the risks associated with allowing Huawei to participate in some of the country's 5G projects.

Earlier this year, after much deliberation, Huawei was eventually allowed to remain involved with the UK's networks, albeit with a 35% market share cap. The company was, however, still labeled a high-risk vendor, and as such was excluded from supplying any equipment in the core of the network, or other sensitive locations.

But since then, the US has moved to restrict Huawei's ability to use US technology and software to design and manufacture its semiconductors abroad due to national security and foreign policy interests. The rule change, which came about last month, heavily restrict the Chinese company's access to the technology needed to produce chips used in a variety of its devices.

The NCSC is now looking at what impact these new restrictions could have on Huawei's role as a supplier to UK networks.

But Huawei vice president Victor Zhang said that the company is still working on the basis of the initial decision made by the UK government at the start of the year.

"We hope the UK government will continue to take an evidence-based approach in the new review," he told journalists on a call.

"We strongly oppose the amendment made by the US Department of Commerce, which will cause huge damage on the semiconductor supply chain," said Zhang. "We are working with our partners and suppliers to examine the impact of the policy in detail, but it is still too early to draw any conclusions."

Huawei is now launching an ad campaign online and across newspapers, in the form of a letter titled "Dear Britain", and re-iterating the Chinese giant's goal of better and faster connections in the UK.

It is unclear, however, whether this will be sufficient to turn the tide and overcome the "high-risk vendor" label the company already carries. Pressure has been building for months from some Conservative politicians to revise the UK's relationship with Huawei, based on fear that the firm's equipment might be used for spying on behalf of the Chinese state.

"We need to clarify some incorrect statements about Huawei," said Zhang. "Huawei is private, 100% owned by employees and independent from any government, including the Chinese government."

SEE: Why the next iPhone will be the 'unofficial start' to 5G

Experts have been cautious in their predictions for the European future of the Chinese giant. Kester Mann, industry analyst at research firm CCS Insights, said at a recent webinar about 5G deployment that Huawei's current position had prompted his team to adopt a low forecast for 5G adoption in Europe in the coming years.

"In the recent weeks, it's become clear the UK government is reviewing Huawei's position. If Huawei is banned entirely from the industry in the UK, there will be a strong impact," said Mann.

Zhang highlighted that 5G deployment would be essential to economic recovery in the aftermath of the COVID-19 pandemic, and that Huawei would be key to achieving the government's promise of achieving nation-wide gigabit connectivity by 2025.

On the other hand, Zhang pointed to a recent report, commissioned by Huawei, from research firm Assembly, which showed that a restriction placed on Huawei could delay a full 5G launch in the UK by up to two years and cost the economy almost £7 billion ($8.8 billion). Huawei has previously warned that a U-turn on the decision to let the company participate in 5G projects would be doing the UK "a disservice".

Join Discussion for: Huawei hits back as UK takes another look...