Huawei's commercial 5G terminal device comes in mmWave and sub-6GHz models, and supports theoretical speeds of up to 2.3Gbps.
Written by Corinne Reichert on Feb. 25, 2018 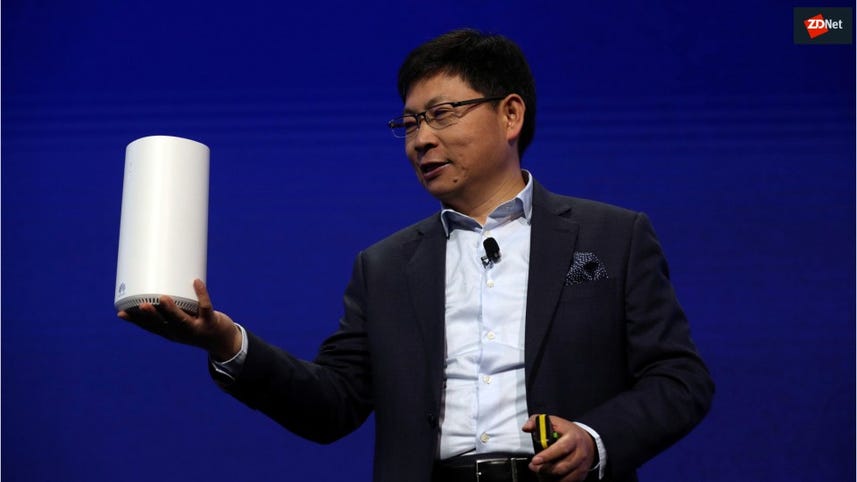 Huawei has announced the launch of its first 5G customer premises equipment (CPE) at Mobile World Congress (MWC) 2018 in Barcelona.

The CPE involves a commercial terminal device supporting 3GPP 5G standards with a Huawei-developed Balong 5G01 chipset, which it labelled as being the world's first commercial 3GPP 5G chipset supporting download speeds of up to 2.3Gbps across sub-6GHz and millimetre-wave (mmWave) spectrum bands.

The CPE comes in a sub-6GHz model and an mmWave model, Huawei announced.

"The Huawei low-frequency 5G CPE is small and lightweight, compatible with 4G and 5G networks, and has proven measured download speeds of up to 2Gbps -- 20 times that of 100Mbps fibre. This provides an ultra-fast experience, allowing users to enjoy VR video and gaming experiences, or download a TV show within a second," Huawei said.

"The Huawei high-frequency 5G CPE is available in indoor and outdoor units."

According to Huawei Consumer Business Group CEO Richard Yu, Huawei has invested around $600 million in 5G R&D since 2009 across network architecture, spectrum, field verification, and other trials.

"From connected vehicles and smart homes to AR/VR and hologram videos, we are committed to developing a mature 5G ecosystem so that consumers can benefit from a truly connected world that transforms the way we communicate and share," Yu said at MWC on Sunday.

Over the weekend, tech giant Intel had also announced that it would be conducting the world's first 5G New Radio (5G NR) over-the-air interoperability public demonstration with Huawei during MWC 2018, using the standards set at the end of last year.

"It will be a fully compliant connection, and that's important because since the standard was just voted on in December, obviously there's only so much time to be able to develop a solution that can support and be fully compliant to every feature in the specifications," Intel GM of 5G Advanced Technologies Rob Topol told media.

Huawei had announced partnering with Intel on interoperability trials based on 3GPP standards back in September 2017, using Huawei's 5G base station prototype and Intel's third-generation 5G Mobile Trial Platform to test 5G NR across the sub-6GHz spectrum band -- including the C-band between 4GHz and 8GHz -- and the higher-range mmWave spectrum bands.

The trials, which began in early December, are taking place in Huawei and Telus' 5G Living Lab and in the homes of Vancouver-based Telus staffers, using 3GPP 5G standards as well as 28GHz mmWave spectrum with 800MHz of bandwidth.

According to Huawei, the companies have attained download speeds of more than 2Gbps for single users. The trials utilise 5G gNodeB elements in the lab, along with Massive Multiple-Input Multiple-Output (Massive MIMO), filtered orthogonal frequency division multiplexing (F-OFDM), and the polar-coding mechanism.

"mmWave technology will be an important tool in ensuring widespread deployment of 5G technology in Canada," Huawei Wireless CTO Dr Wen Tong said at the time.

At the time, president of Huawei's 5G product line Yang Chaobin said Phase 1 of the 3GPP 5G NR standardisation was completed "with great progress" thanks to collaboration between regulatory agencies, governments, research organisations, academia, and industry.

"Huawei will keep working with global partners to bring 5G into the period of large-scale global commercial deployment from 2018," he said.

In October, Huawei and LG U+ had announced completing dual-connectivity technology verification during a 5G trial in Seoul, providing 20Gbps downlink speeds by simultaneously linking two 5G base stations; while in November, Huawei additionally demonstrated separate uplink-downlink (UL/DL) decoupling technology across a 5G-LTE network deployment in London as part of its strategic partnership with BT and EE.

Huawei has been trialling 5G with carriers worldwide, in January last year attaining speeds of around 35Gbps with Singaporean telcos StarHub and M1.

Huawei is likewise helping Australian provider Optus roll out its 5G network for 2019, and is on the Australian government's 5G working group.