Paying $20 for a genuine Apple charging cable for your iPhone might seem like overkill (that goes up to $30 if you want a 2-meter cable!), especially when a quick search of sites such as Amazon or eBay will uncover no end of cables – many claiming to be genuine (breaking news: they are not) – for only a couple of bucks. They are, after all, just charging cables, so what's the worst that could happen?

Now, I'm no fan of handing over big bucks for a charging cable. I mean, the fact a 2-meter USB-A-to Lightning cable from Apple is $29 is a big part of the reason why there's such a vast, unstoppable industry in poor-quality cables.

Over the last few months I've bought and tested a couple dozen USB-to-Lightning cables in the sub-$10 price bracket, and all in all, they're pretty gnarly.

So what's wrong with them?

Well, first off, every cable I bought that claimed to be a "genuine" Apple cable was a counterfeit. And poor quality counterfeits at that. Apple has a support page outlining how to spot the fakes. If you want a genuine Apple cable, I suggest buying direct from Apple or an authorised Apple reseller.

I'm also amazed how many just didn't work. I'm assuming that the idea is that if you're only paid a few bucks that you'll be less motivated to claim your money back. Or maybe the seller is relying on the buyer thinking their charger or iPhone is broken. Out of my test pool, over 15 percent were dead on arrival.

Then there's the issue of durability. Or lack thereof. These cables seemed very susceptible to damage from being bent and twisted, and the Lightning connectors also seems to fall off quite readily. If one of those break in the Lightning port of an iPhone or iPad, they can be difficult to remove. 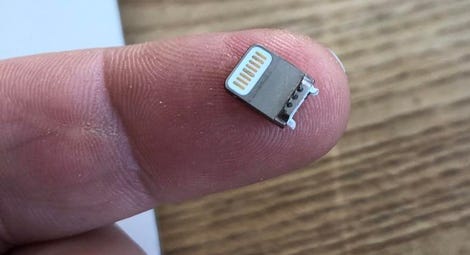 And some were just shoddily made. Five had really poor quality USB connectors on them that didn't fit well into a port (one was a little mangled and I had to operate on it before it would plug in properly), and several had really thin cables or poor insulation that easily broke and tore off.

The thinner cables also seem prone to overheating. While I couldn't get any to do anything spectacular like melt or burn, I'd be worried about their long-term safety, especially as they get damaged in use.

I did end up with one cable that seemed half decent. It worked, even after bending it a few times, and the Lighting connector didn't fall off.

Bottom line, if you don't want to buy a Lightning cable for your iPhone or iPad, then buy one from a reputable third-party maker. They'll cost you a few bucks more, but it's worth it.

And there are plenty out there, from Amazon and Anker, to Monoprice and Nomad. There are also no end of high-quality specialty cables out there, such as the Nomad Ultra Rugged "multi-tip" cable which can charge iPhones, iPads, Android devices, and anything that uses a microUSB port, the ultra-long 10-foot Native Union Night Cable, and the steel-armored Fuse Chicken Titan Lightning cable.

The same isn't as applicable for microUSB cables that are used for charging Android devices and, well, almost everything else. Yes, I've come across cheap ones where the ends fall off or the cable stops working after a bit of rough handling, but on the whole the quality of these cables at the low-price end of the spectrum is far higher, in part because there's a massive industry in making cheap charging cables to ship with devices.

Join Discussion for: I bought a load of cheap iPhone Lightning...