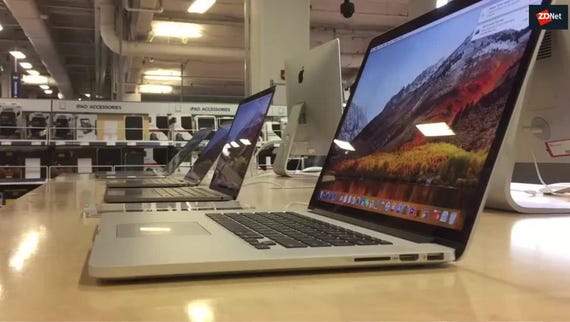 If Apple switches to Arm, is it wise to buy an Intel-based Mac?
Watch Now

We are exactly one week away from Apple's first all-virtual WWDC. There are quite a few rumors in the wind. In this article, we'll look at the two biggest rumors and try to unpack how one should affect the other.

ZDNet's intrepid team of reporters and analysts have already written numerous articles about the first big rumor of WWDC: that Apple is finally going to announce a switch from Intel to Arm processer.

Also: Apple to move Mac to Arm CPUs: What you need to know

This is not a new discussion. We've been intermittently discussing the possibility of Macs moving off of the Intel family to Arm since at least 2017 (and possibly earlier). The idea is that Apple's Arm-based processors for iPhones and iPads are ridiculously fast, and with Apple's desire to control all of its supply chain, the move to Arm seems inevitable.

So that's rumor #1: the move to Arm. We'll talk more about that in a minute.

The second rumor is that Apple is getting ready to introduce a new iMac, possibly with a redesign. Since the iMac has looked pretty much exactly the same for a decade, this is potentially big news. We're looking at a possible spec bump, retirement of the execrable hard drive/SSD "fusion" drive, and a new look, maybe even with new display technology.

All that leads to the conflict that headlines this article. If Apple is announcing a new processor architecture that will obsolete current Macs, should you still buy a current-model Mac, which is shipping with that soon-to-be-obsolete architecture?

I'm not going to do much of a deep dive into Arm and what it means for Mac. ZDNet Editor-in-Chief Larry Dignan wrote a helpful piece just last week that will take you through all of that.

But I do want to make a few points. First, this is not Apple's first processor-change rodeo. The very first Mac, model M0001, launched in January 1984 running a Motorola 68000 processor. Ten years later, in 1994, Apple began its migration from 68000-based computers to Power PC-based machines.

While there were certainly growing pains behind each of these transitions, Apple has done a surprisingly good job of making processor family transitions mostly painless for the average user. In fact, with the exception of a few app incompatibilities and slowdowns due to emulation, most Mac users back in the day had no idea what processor family they were running on — it was just a Mac.

We can expect a similar experience in the move to Arm. Sure, from a developer perspective, there will be a lot of work. Intel and Arm are radically different. But most Mac developers have already done iOS development, so they're familiar with Arm. Companies like Adobe, with Photoshop, have done extensive Arm development, helping them to prepare for the transition.

Also, don't expect the Arm transition to be any time soon. Apple's expected announcement at this WWDC of its plans to do so in the future would be a forward-looking guidance because developers will need time to code. Don't expect the first Arm-based Macs until at least 2021 — and these will almost assuredly be on lower-end machines. I expect an Arm-based MacBook Air in 2021, but not an Arm-based iMac.

Apple's Arm implementations are excellent, but they are suited for mobile devices. They top out at four cores, where some current generation MacBook Pros are based on the i9 chip that can be spec'd for up to 8 cores. The iMac Pro can go up to 18-cores in a Xeon W processor, and the Mac Pro can go up to 28 cores.

To equal the power of these higher-performance machines, Apple has a lot of work to do with its silicon. They'll either need to substantially increase the die size of their processors or define a whole new tightly-coupled multi-processor architecture from the ground up.

It will happen, of course. But certainly not right away. It's going to take some time for higher performance processors capable of running high-end desktops to be ready for prime time.

And what about this iMac?

We don't know much for certain about what's coming in the new iMac, but we can be almost 100 percent sure that it will be Intel-based. In other words, it will be based on a technology that will be phased out over the next few years.

Given that Macs often have a usable life of nearly a decade, does it make sense to buy a new, undoubtedly expensive Mac now since it may be obsolete nearly immediately?

Right now, for example, I'm typing this on an 8-year-old Mac mini attached to my big screen TV. The dog is sitting on my lap (with the keyboard sitting on top of a pillow on top of the dog). While I wouldn't use this Mac for programming or video editing, it's a quite competent writing, email, and browsing machine — even eight years after its purchase.

While Apple will be (more likely, has been) migrating MacOS to run on Arm, MacOS support for Intel will exist for a very long time to come. Apple has too many existing customers, especially corporate customers, who would not stand for a quick obsolescence.

If you buy a 2020 Intel-based iMac today, and even if Apple introduces an Arm-based MacBook Air in 2021 and possibly an Arm-based iMac in 2023, you will still most likely be able to upgrade MacOS on your 2020 Intel iMac as late as 2025 and beyond.

More to the point, most of the applications you're running in 2020 are likely to also be supported in 2025. When Apple made previous processor moves, they incorporated the idea of dual binaries, where the distributed app contained code compiled for both processor architectures.

And that is, really, my bottom-line answer to the top-line question I asked at the beginning of the article. So, if Apple announces a new iMac AND a move to Arm, should I still buy that new iMac?

The answer is simple. Buy a new iMac if you need a new iMac.

What about you? Are you excited by the new iMac? Do you think a change to the look is long overdue? Do you hate the iMac's "chin" as much as I do? Or are you more interested in a headless machine like the Mac mini or Mac Pro? Windows users, feel free to chime in, because of course you will. Let us know in the comments below.

Join Discussion for: If Apple announces a move to Arm, should...