Lenovo is launching its smart glasses at CES 2017 with the aim landing business use cases. The catch is the system, which includes glasses and a pocket unit, won't be available until June.
Written by Larry Dignan, Contributing Editor on Jan. 3, 2017 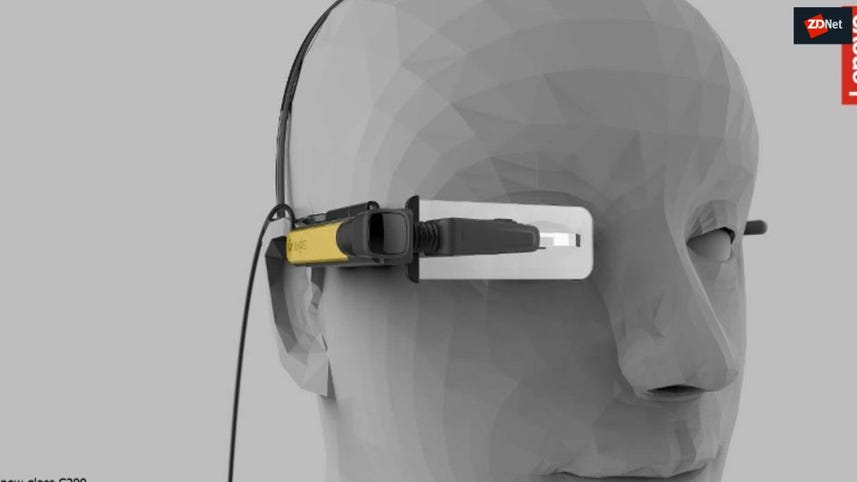 Lenovo at CES 2017 is entering the smart glasses and augmented reality fray with a device that runs on Linux, and can be used for business and enterprise use cases.

Smart glasses, which were popularized via the Google Glass initiative, haven't gained traction in the consumer market, but companies such as Osterhout Design Group and Vuzix have found a bevy of use cases in the enterprise.

Lenovo's New Glass C200 resemble Google Glass and are designed to be used for business customers. That enterprise focus makes sense given Lenovo's portfolio of business gear ranging from servers to PCs to smartphones and now smart glasses.

According to Lenovo, New Glass C200 is designed to leverage artificial intelligence and augmented reality. In a nutshell, Lenovo sees smart glasses as a way to bring analytics and data to the small screen in a wearable.

C200 is a modular system that includes a smart glass and pocket unit. The Glass Unit weighs in at less than 60 grams and uses one eye. This design approach will reportedly enhance mixed reality perception. The Glass Unit uses an app and plugs into the Pocket Unit to boost performance. There are also accessories to carry the units on belts as well as in a pocket.

The use cases for Lenovo's smart glasses gear rhymes with other implementations. For businesses, training, remote repair, directions and troubleshooting deliver quick returns.

The rub here is that Lenovo's New Glass C200 won't be available until June and the market is likely to be more crowded by then.