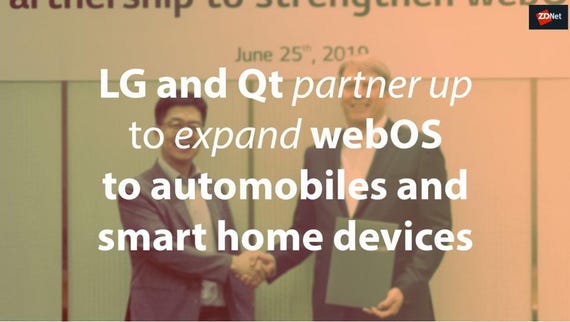 LG Electronics has partnered up with The Qt Company to expand the application of its open source webOS platform.

The South Korean electronics giant and Finnish software developer said they will be teaming up to embed webOS into future automotive, robotics, and smart home devices.

LG's webOS will also officially become a reference operating system of Qt, the companies added, which means LG will get the latest version of Qt software faster so it can be used for the development of webOS.

The Qt software is a graphical user interface tool used to develop UI and UX design in consumer electronics.

The companies hope this will result in improved management of resources when porting Qt software into webOS, which will lead to a better user experience.

Prior to this, LG had already been using Qt for various products such as its Smart TVs. Its rival Samsung Electronics, meanwhile, has used Tizen for its own TVs.

LG said it will also add focus to the development of webOS Auto to expand its footprint in the automotive industry.

The South Korean electronics maker opened a developer website in March, where programmers can access the open source edition of the platform to develop their own interfaces.

The AI chip, which uses its own neural engine, is aimed at being used in home appliances.

Join Discussion for: LG and Qt partner up to expand webOS to automobiles...