Microsoft makes you really angry? No, you're not being silly

Microsoft's misguided launch of its very fine new Edge browser has inspired a spirited response -- much of it from more confused and angry readers, but some from Microsoft's defenders.
Written by Chris Matyszczyk, Contributor on Aug. 23, 2020 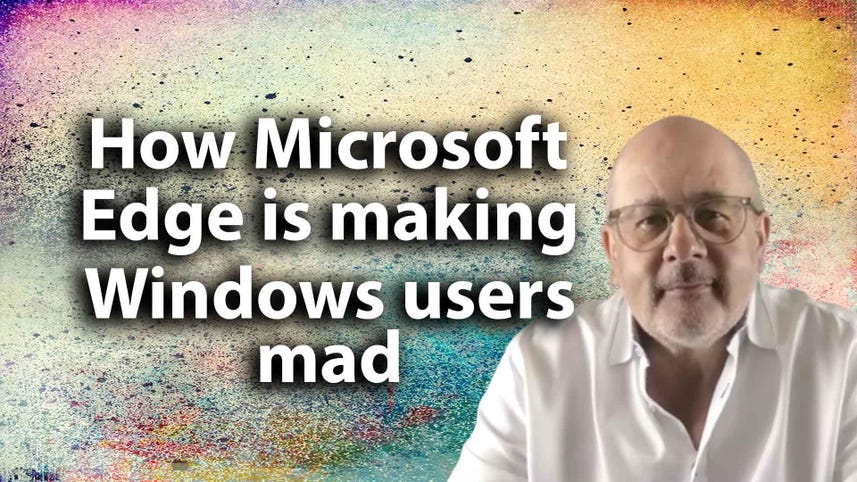 I never thought emotions could affect me this way.

I thought Goodyear made fine products. However, following an odd outburst of authoritative emotions, I may have to grab a kitchen knife and slash my own tires.

And then there are the ululations of fulmination around Microsoft Edge.

My inbox has been dripping in tears, spittle and, I fear, a little nerdy drool, as reactions to Microsoft's fine new browser -- or, rather, the way Redmond has chosen to launch it upon people -- have poured in.

Since my last column on the subject -- featuring Microsoft's oddly worded announcement that Edge can never, ever be uninstalled -- readers have entered the Technically Incorrect confessional (private branch) and offered more of their feelings.

Feelings. Nothing More Than Feelings.

Many are, indeed, stunned that Edge was foisted upon them in a slightly doltish manner.

This from a reader: "My wife was shocked to see Edge just install itself with no warning."

And this: "Microsoft is like a doctor with a bad bedside manner. Not very good at making end-users receptive to change."

Change isn't always easy. In this case, Microsoft changed many readers' temperatures. Some were really quite hot.

"Sadly, I disagree with you about Microsoft Edge being malware," said one reader.

Technical point: I didn't say Edge was malware. A reader did a couple of weeks ago, with some vehemence.

"In my opinion," the disagreeing reader continued, "it is actually 'garbage-ware'!!! Have seriously given it at least three (3) chances for improvement and continue to arrive at the same conclusion. What a POS implementation!"

"I had my laptop tell me it couldn't open Windows and ran disk checks. Scared the hell out of me. After it finishes, I logged in, only to get a message that my laptop was installing Edge. It removed Explorer without asking me and installed Edge without my permission. Eff that. Malware indeed," said another.

Readers also had trouble with Edge just not wanting to go away.

One example: "I installed Edge on my Mac, running Catalina, and have discovered that Edge makes itself load every time I restart the computer. It appears that they are trying the same nonsense with the Mac version as well. I'm going to experiment a bit more and then most likely delete it."

The fact that someone wants to go to the trouble of deleting what, may I remind you, is a very fine product, is troubling.

"The forced Edge upgrade also forced install Microsoft OneDrive," said one reader. This reader claimed he didn't know OneDrive had been installed and this led to quite catastrophic results for his small business when OneDrive and Office corrupted.

That seems a little extreme. It does, though, show how much people rely on Microsoft's software, sometimes reluctantly.

Oh, Stop That Whining. You're Just Being Silly.

There were those, of course, who thought all this whining was bilge-based.

Technically, I'm told you can uninstall them. Practically, I'm not going to suggest you try.

ZDNet contributor Ed Bott mirrored this critical view. He described those who have a problem with Edge's forced installation and announcement of no uninstallation possibilities as "poor befuddled souls."

He said their issues were merely "silly complaints."

Don't bother listening to anyone who isn't inside the Tech Tent. What the hell do they know?

That's how we got Google+.

That's why so many inside Techworld Central could never understand that the phones with the most "features" weren't the phones that sold best.

"But look, this one can do more things," said the tech insiders.

"But look, I've got no idea how to use this thing and it's annoying me," said real human beings, as they bought iPhones.

Or, as one reader put it: "Techs in general think they know stuff." The reader felt this was a dangerous posture, as real human beings aren't so sure that the stuff techs (think they) know can be translated into helpful, understandable communication and action.

Can You Feel The Force?

Knowing simply isn't the same as feeling, as having at least some instinctive empathy with your customers.

Why is it, indeed, that Apple users don't seem to complain when Safari appears -- albeit discreetly and tastefully -- on their gadgets?

Are they more socially compliant? Are they in the thrall of a strange cult? Are they of higher intelligence, understanding the nuances of software development right down to the occasional use of stimulants?

Or could it have something to do with Apple's software – and the way it's introduced -- often being more user-thoughtful? While Microsoft's software has often been foisted upon innocent humans with all the finesse of a jackbooted ballet dancer.

When it comes to browsers, could it be that Internet Explorer and the original Edge were about as excellent as an inverted shot glass is in keeping out the rain?

But, most of all, could it possibly be that Microsoft went about this latest action in a coldly Techworld way? Which is strange, given that the company has made enormously positive efforts in recent times to make its brand more likable.

In the case of launching the new Edge, instead of understanding its customers and their potential feelings, Microsoft seemed to ignore them.

Perhaps, the critics will say, Windows is used by so many people that you're bound to have one or two who are so spectacularly ignorant that your eyelids start folding inwards.

The truth, I fear, is that Redmond has angered many -- too many -- when it could have avoided it.

After all, Microsoft wouldn't have felt the need to write a gauche support post entitled "Can't Uninstall Microsoft Edge" if it didn't see a mounting problem.

I'm grateful, indeed, to my former CNET colleague Sean Hollister -- now with The Verge -- for examining the Google Trend for "Uninstall Microsoft Edge." From May 31, search volume seems to have increased substantially.

It's About The Brand, Silly.

I don't expect every tech insider to understand -- or have a feel for -- the irrationalities of human behavior. They're far too busy trying to systematize human behavior, in order to maintain control. I'm sorry, I mean to make the world a better place.

I don't expect them to understand why Apple has such a strongly positive brand (well, not among gamers right now) and, with Windows, Microsoft doesn't.

Here's one of Ed's ZDNet headlines from relatively recent times: "Windows 10: Has Microsoft cleaned up its update mess? (Spoiler: no)."

Here's another from not too long ago: "Microsoft's mystery update arouses anger, suspicion among Windows 10 users."

When your brand endures such reviews, the negative feelings linger. They become ingrained.

One of the more inadvisable things a company can do, though, is dismiss its customers' discomfort or think their complaints silly.

All tech companies have done it on occasion.

Just as Apple finally -- and reluctantly -- succumbed to the realization that its Butterfly MacBook keyboard was as effective as Cling Wrap around a cactus, so it might be worth Microsoft wondering why it didn't manage to make so many feel good about Edge. Especially when, at heart, it's such a good product.

The company could have launched a countdown. It could have explained to customers that a truly fine, new browser day was coming. What's reflected in users' many complaints is that Microsoft didn't bother.

When you have a strongly positive brand, you'll be forgiven more easily when you transgress. When you're Windows, not so much.

And as for you, emotional Technically Incorrect readers, please continue to express your feelings.

Life would be less enjoyable without you.

Windows 11
Does disk encryption slow down your PC? [Ask ZDNet]