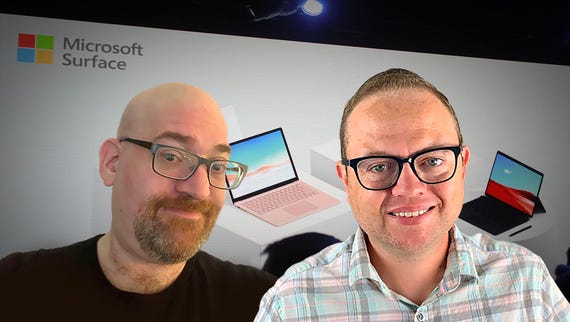 There was a lot to digest at yesterday's Microsoft Surface event. Some stuff was predictable, such as the updates to the existing Surface line, while others, such as Microsoft's new dual-screen Android smartphone and Arm-powered Surface Pro X, came as a bit of a surprise.

There was also some randomness in the form of Surface Earbuds. It seems everyone wants in on the earbuds market.

As I said, lots to digest. But a couple of things really stood out.

The first thing that jumped out at me was that Microsoft is relying less and less on Intel. Not only did we see a Surface powered by a custom Arm chip designed by Microsoft and Qualcomm called the SQ1 which features an integrated AI engine and is capable of running full Windows 10, but Microsoft also unveiled a 15-inch Surface Laptop 3 powered by "AMD Ryzen Surface Edition" processors.

According to AMD, these are the "most powerful mobile processors for ultrathin laptops we ever created," and appear to be customized versions of AMD's 12-nanometer Ryzen 7 3700U and Ryzen 5 3580U silicon.

While Intel still gets a look-in, it should be of concern to the chip giant that Microsoft is broadening and diversifying its chip line, and not only getting more deeply involved with Arm but also boasting about the benefits that AMD's Ryzen chips bring to the table.

This is an interesting strategy, and it's also noteworthy that Microsoft has developed an interesting and innovative AMD Ryzen-based portable, which is rare and will hopefully encourage other OEMs to get creative.

The other thing that made me sit up was Microsoft reentering the smartphone arena with quite a standout Android device, complete with heavily customized UI and dual screens. No one can claim that Microsoft is copying Apple here. It's clear that Microsoft wants to move into quite a niche market in a very aggressive way, perhaps with the idea of making dual screens mainstream, and putting Apple on the back foot.

The real question here is how determined is Microsoft to make an aggressive push into the smartphone market? It's a tough market to crack -- as Microsoft already knows -- with stiff competition from all sides.

Five years ago, I'd have said that Microsoft had no chance against the twin titans of Apple and the big names in Android. Today, Microsoft, along with my views, have changed. Microsoft is a different company, far more determined and with what seems like more energy to stick to a longer-term strategy. Going for a dual-screen smartphone is a bold move -- doubly so given the horrible false-start that Samsung had with the Galaxy Fold -- and shows that Microsoft has a vision for a smartphone that goes beyond a slab of glass.

Which brings us to another question -- is this a thing people want? Time will answer. But if the answer is "yes," then watch out Apple, because you're now on the back foot.