Microsoft officials went public with some new details about its strategy for enabling developers to write once and run on any version of Windows during a deep-dive session at Mobile World Congress on March 2.

(I'm not at MWC and Microsoft's "First look at the Windows 10 Universal App Platform" event for developers is not being live streamed. But there are lots of good tweets covering the event, as well as a blog post from Director of the Windows Developer Platform Kevin Gallo summarizing the content presented.)

For the last few years, Microsoft officials have been evangelizing the idea that "One Windows" running across a variety of device types will enable developers to create universal apps that will build on a single runtime, use an increasingly similar set of application programming interfaces (APIs) and developer tools and be available from a single store.

With Windows 8 and Windows Phone 8, Microsoft got a step closer to realizing its "One Windows" vision. But with Windows 10, the company is hoping to get a lot closer to this promised nirvana.

The new universal app platform (UAP) that Microsoft is building with Windows 10 will sit on top of the Windows core. The UAP is a superset of WinRT, the Windows 8 and Windows RT runtime, according to tweets from Matt Lacey (@mrlacey), who runs the Windows Apps London developer group.

"The migration path to Windows 10 UAP apps is from 'universal' 8.1 apps," Lacey tweeted. There are some "additional conversion steps" needed, ranging from referencing extension development kits, to moving Charms bar interactions. (Here's a list of six steps provided by Microsoft.)

Developers will be able to target different versions -- either a range or individual -- of the UAP, not the underlying version of Windows, according to Lacey. The UAP "is a versioned collection of versioned contracts," he explained.

Universal apps don't mean apps that look and work exactly the same across all device types. Microsoft is building "extension SDKs (software development kits) that will allow developers to build platform/device-specific elements while still building on top of a single binary, according to tweets from the event.

The Adaptive User Interface in universal apps will adapt to the device, tweeted freelance tech journalist Tim Anderson (@timanderson). This Adaptive UX is a set of adaptive controls that support mouse, keyboard and touch, and "look a bit different from Metro," Anderson said.

Microsoft also is opening up Windows 10 across platforms to a new category of applications officials are calling "hosted web apps," or simply "Web apps." These are wrapped versions of Web sites that will be available for download from the coming single store. These apps also will be able to call universal APIs like notifications, camera, contact list and calendar from JavaScript. Microsoft is making these hosted Web apps pinnable and able to be integrated with Cortana, Microsoft's personal digital assistant. 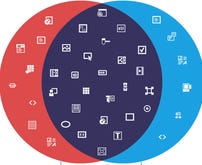 Microsoft developer directions: One Windows core doesn't mean one store Does a common Windows core across phone, PC/tablet and entertainment console mean there also will be a single store across these platforms? Not yet, if ever.

It's worth noting that Microsoft execs still have not confirmed a report in a (now-removed) Microsoft blog post that Win32 apps, along with other digital content, also will be available in the coming single store.