The Arab Spring showed the potential of young people in the Middle East armed with technology. But the picture since then has been patchy.
Written by Damian Radcliffe on Nov. 30, 2018 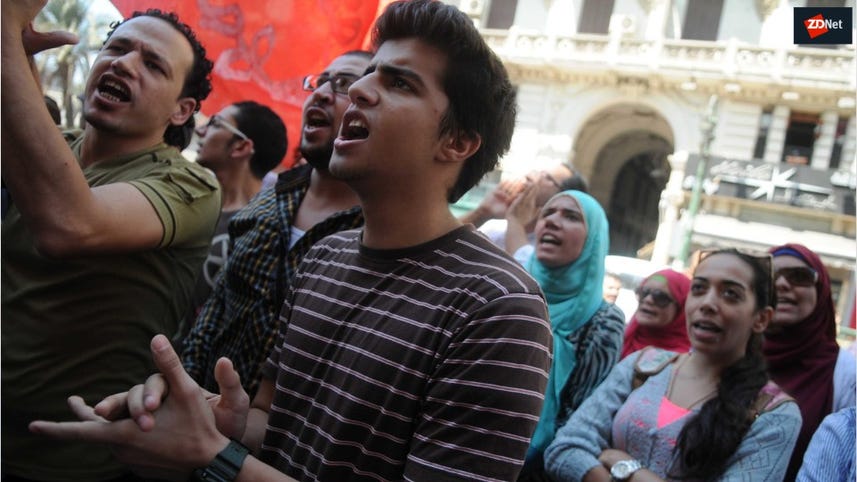 Why is there so much interest in the youth demographic? Put simply, the Middle East's youth population bulge makes it too big to ignore.

"In 2015, close to one person out of five in the region was aged between 15 and 24 years," the World Economic Forum recently noted, following on an earlier observation that "one-third of the population is below the age of 15 years".

The forum goes on to suggest that one of the main challenges will be the empowerment of youth and the huge pool of talent, energy, and resources it represents.

How does the Arab Spring fit into this issue? In 2011, the Arab Spring led to regime change in Tunisia, Egypt, and Libya, as well as further protests across the region. For many, the abiding images of the period feature large crowds of young people armed with little more than their phones.

The use of phones to coordinate activity and share images and status updates with the world via Facebook and Twitter helped facilitate change, but views vary on the extent of its contribution.

Malcolm Gladwell's 'Why the revolution will not be tweeted' and John Pollock's 'How Egyptian and Tunisian youth hacked the Arab Spring' offer two perspectives, while Clay Shirky's exploration of 'The political power of social media' placed events in a wider historical context about technology's contribution to civil society and the public sphere, and internet freedom as a tool of statecraft.

Whatever your point of view, the Arab Spring highlighted that everyone -- from governments, to businesses and researchers -- needs to understand the concerns, attitudes, and behaviors of Arab youth.

What's changed since the Arab Spring?

It's a mixed bag. Digital adoption has grown and become more mainstream, so Arab youth are more connected than ever. But many of the underlying causes of the Arab Spring remain, such as unemployment, underemployment, lack of voice, and participation.

"Smartphone penetration across the region is nearly 100 percent. So, deficits in accessing wired internet, which are serious in parts of the Middle East, are somewhat remedied by the availability of smartphones and data services."

John's company has tracked the attitudes and behaviors of this cohort through the annual Arab Youth survey, which in 2018 celebrated its 10th anniversary.

He argues that the biggest change has been how young Arabs consume media.

"Young Arabs are now getting their news first on social media, not television. This year, our survey reveals almost two thirds (63 percent) of young Arabs say they look first to Facebook and Twitter for news. Three years ago, that was just a quarter."

Although young Arabs have benefited from increased technological adoption, which in turn has resulted in changing digital behaviors, many of the wider political and socio-economic factors that contributed to the Arab Spring endure.

World Bank data indicates that youth unemployed is more than double the global average, while according to the World Economic Forum youth unemployment across the region stands at 31 percent, five times higher than the adult average. University graduates constitute nearly 30 percent of the total unemployed.

In 2012, a year after the frustrations felt by many young people bubbled over and onto the streets, Booz & Company (now Strategy&) published a detailed report on the attitudes and behaviors of the Arab Digital Generation. In many cases, little has changed since this report was published.

Produced with Google, and polling more than 3,000 digital users born between 1977 and 1997 in nine Middle East countries, they found a cohort with "less traditional ideas about family, religion, and marriage", and clear expectations and preferences for tech to enable greater e-government and e-commerce, as well as improved healthcare and education.

Although progress has been made in these areas, more clearly needs to be done.

What are the key opportunities and challenges?

A key implication of the regions demographic timebomb, as the UNDP explains, is that "the region needs to create more than 60 million new jobs in the next decade to absorb the large number of workforce entrants and stabilize youth unemployment".

Elsewhere, in 2016, Sophie de Caen, acting director of the Regional Bureau for Arab States in UNDP, suggested that, "Arab countries can reap the huge demographic dividend that its young population represents if they invest in enhancing the capacities of their youth and enlarging opportunities available to them".

ASDA'A Burson-Marsteller's John is optimistic about the future, arguing that the UAE and Saudi Arabia will be catalysts for growth in the tech sector.

"Governments are aware they have to provide rewarding, fulfilling jobs for their overwhelmingly young populations. In the UAE, we've seen the cabinet appoint a Minister for Artificial Intelligence; Dubai has pledged to be the leading AI-driven administration in the world, and the first 'blockchain government'," says John.

"In Saudi Arabia, the sovereign wealth fund, PIF, has teamed up with Softbank to create a $100bn fund for tech investment, the biggest such fund of its type in the world. But Arab countries won't achieve these goals unless they address the core issue of education."

John says across the Middle East, 29 percent of young Arabs identified modernizing the education system as one of the top three things that governments must focus on to move the region in the right direction.

"Gulf Cooperation Council (GCC) states have woken up to that in recent years and have pledged greater emphasis on STEM education. But the region as a whole needs a focus on building a modern education system that can prepare the region's youth for the jobs of tomorrow," he adds.

One reason why this focus is needed, the World Economic Forum said last year, is that "by 2020, 21 percent of core skills in the countries of the GCC and 41 percent of those in Turkey will be different to skills needed in 2015".

Northwestern University in Qatar (NUQ) has undertaken an annual regional survey exploring media use patterns, content preferences, and attitudes toward topics such as censorship and digital privacy, freedom of speech and cultural preservation.

A persistent theme from NUQ's studies is the variety of digital experiences across the region. It's an issue that John also alludes to, highlighting the mixed nature of digital progress.

"Businesses will see that there is huge untapped opportunity in expanding their services to reach young digital natives," he says.

"For example, just over half of young Arabs say they shop and bank online, with varying degrees of frequency. But that suggests that almost half are yet to embrace online shopping.

"And we see in the geographic splits that while GCC youth are more familiar with online spaces -- almost three-quarters have shopped and banked online and half have banked online -- in North Africa, around 70 percent have not used the internet for shopping or banking."

Specifically, he suggests, we will start seeing more apps and services created by Arabs and for Arabs.

"We've seen e-commerce startups like noon.com move into that space; we have homegrown blockchain specialists starting to emerge, and, with the right investment and motivation, we'll see young Arab startups occupying spaces that have traditionally been dominated by Western companies."

World Bank data indicates that the Middle East has one of the lowest levels of entrepreneurship in the world, with just one newly registered firm per 1,000 working age adults.

Yet, according to a 2016 survey produced by the World Economic Forum, one in two young Arabs identified creating their own business or working on an entrepreneurial project as a key area for potential empowerment.

It's an interest that John has also seen emerge through the Arab Youth Survey.

"This year is the first in which technology has emerged as the preferred sector in which young Arabs want to set up a business, chosen by 18 percent of those surveyed. In previous years, retail and real estate have always been the favoured sectors," he says.

Navtej Dhillon, the former director of Brookings' Middle East Youth Initiative, argued back in 2008 that the youth challenge is the most critical 21st century economic development challenge facing the Middle East.

"In a region where almost 65 percent of the population is under the age of 30, long-term prosperity and stability hinges on the opportunities afforded to this generation."

A decade on, that sentiment remains true. As the United Nations Development Programme explained last year: "The Arab region is home to the youngest population in the world, with over 100 million young men and women between the ages of 15 and 29."

Meeting the needs of this large, tech-savvy and often frustrated demographic is important for the stability of the region, as well as its growth.

Digital technologies have exposed Arab Youth to new possibilities and global cultures, as well as enabling different ways of communicating, spending their time and interacting with the world around them.

They're a vibrant, digitally confident cohort, who will inevitably shape the future of the region. Doing the best by them will be essential if the region's full post-petroleum potential is to be unlocked.