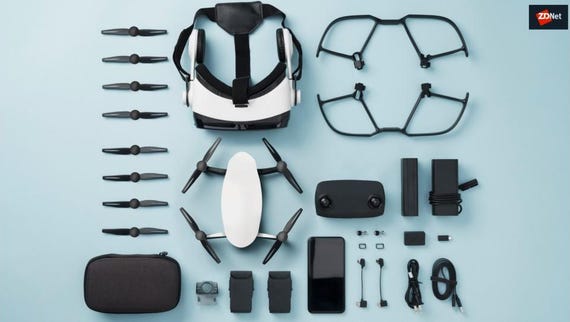 According to the United States FAA Unmanned Aircraft Systems Report for 2019, the number of unmanned drones is expected to double in the next twelve months from roughly 1.2 million aircraft to nearly 2.4 million aircraft.

In fact, many higher-end hobbyist or recreational drones are now being used for commercial filming and real-estate use.

The Federal Aviation Administration treats commercial and recreational flying differently. Anyone who wants to fly a drone that's under 55 pounds for commercial benefit must qualify for a Part 107 license and get an FAA Remote Pilot Certificate. Doing so requires passing a TSA security check and a comprehensive exam.

The FAA has been far less demanding when it comes to recreational drone flying. For years, it bundled recreational drone activity under the same category it used for model airplane flight. But since drones are much easier to fly and can be launched from virtually any location, they are proliferating -- and causing accidents.

I've got to give points to the FAA for trying to keep up with the changing state of this market. They've been changing their rules regularly as they try to find the right balance for safety and recreational drone use.

As I explained last year, small (under 55 pound) drones were initially classified as model aircraft and, as such, could not be required to register with the FAA. But when President Trump signed the National Defense Authorization of 2017, it became Public Law 114-328. Its defense authorization laws superseded the model aircraft exception of Section 336.

As confusing as all that is, you can ignore it. That's because, when President Trump signed H.R. 302, the FAA Reauthorization Act of 2018 last October, it became Public Law 115-254. That law went into effect on May 20, 2019 and marks quite a few changes in how recreational drones are managed.

As of now, drones no longer live under the "Special rule for model aircraft," as the old Section 336 designated. Pub.L. 115-254 moves drones out of Section 336 into a new Section 349, entitled "Exception for limited recreational operations of unmanned aircraft".

There are two new rules that are particularly interesting and important. The first is that, for now at least, recreational drone pilots are prohibited from flying in any sort of controlled airspace.

Let me unpack that for you.

Airspace is categorized by a number of classes, which determine where and how aircraft may fly. Controlled airspace (which is anything but Class G) consists of airspace where manned aircraft fly, regions surrounding airports, plus a variety of other restrictions designated such for safety or national security.

Prior to the new law, if you wanted to fly in a controlled airspace, you had to notify the air traffic authority of where you intended to fly in order to confirm there would be no other craft in the sky at the time.

This could be a simple process or quite challenging. I live in a rural town with a small state airport. Unfortunately, the tower isn't regularly manned, so getting flight permission has been quite the unsuccessful challenge.

For at least this summer, I won't need to worry about it. That's because the new law simply prohibits recreational drones from flying in controlled airspace, whether or not you can get a tower's permission.

This will not always be the case. The FAA is setting up the Low Altitude Authorization and Notification Capability, or LAANC system. According to the FAA, it "provides access to controlled airspace near airports through near real-time processing of airspace authorizations below approved altitudes in controlled airspace."

As of the time I'm writing this article, the FAA's page on LAANCE states that LAANCE will be available to Part 107 commercial drone operators, but the law that went into operation last week extends that to recreational flyers.

LAANCE is being fielded at approximately 500 airports. If you want to fly in an airspace controlled at an airport not running LAANCE (probably like mine), there is expected to be a manual form you can file.

LAANCE is supposed to be available for recreational flyers in November. I'm not holding my breath. In the meantime, if you want to fly in controlled airspace, you're allowed to do so at a specific set of designated fields indicated by blue dots on this map. Here in Oregon, there are three such fields, none closer than an hour to me.

Prior to this law, if you wanted to launch a drone in the air and send it up 400 feet, you could do so without any education or flight knowledge whatsoever.

The new law requires a test be passed by recreational drone pilots. The wording is:

The test is designed to ensure that a drone operator can demonstrate:

(A) understanding of aeronautical safety knowledge; and (B) knowledge of Federal Aviation Administration regulations and requirements pertaining to the operation of an unmanned aircraft system in the national airspace system.

At this point, we don't know much more. Most discussions I've seen imply that this test is due to be available by November, but like the LAANCE system, we'll have to wait and see.

We also don't know what it will cost, or whether it can be taken online or must be taken at a proctored test center. At this point, it's not entirely clear the FAA knows, either.

When I first sent my Mavic Pro 400 feet up into the air, it terrified me.

I was flying a 1.64 pound object up there, in the wild gray yonder (we're in Oregon, it's gray most of the time). Most drone owners don't think about what would happen if their drone fell out of the sky, but I did.

If your drone's propellors suddenly stopped spinning at the maximum allowed altitude of 400 feet, you'd have five seconds to think through your next actions. Meanwhile, the drone would drop, accelerating to 160.4 feet per second, or 109.4 miles per hour. It would impact the ground with the energy of 899.53 joules. Not only would the drone go splat, so would anything underneath it.

Parents buy their little kids drones for their birthdays or holidays. I'm a member of a local community Facebook page and at least every two weeks, there's a parent asking for help retrieving a child's drone that landed on a roof or got stuck in a tree. We don't hear as much about adult drones until something goes horribly wrong.

Most drone users have no idea what airspace they're allowed to fly in. They buy the drone, charge the battery, and happily send it up into the air. This is dangerous.

Even though having an education requirement is a good thing, I doubt most drone consumers will pay attention. Additionally, if the recreational drone test is particularly difficult, it might just be a good idea to take the Part 107 test and become commercially licensed. That's probably the path I'll take, unless the recreational test seems much easier.

As for the LAANCE system, it's a bummer that some of us can't launch our drones in our own towns or in areas we'd like to fly. But the fact is, there's often a small plane flying overhead, so it's better to err on the side of caution.

There are large open spaces where drone flying is permitted. The LAANCE system, when available, may actually make it easier to fly safer and in better coordination with manned aircraft.