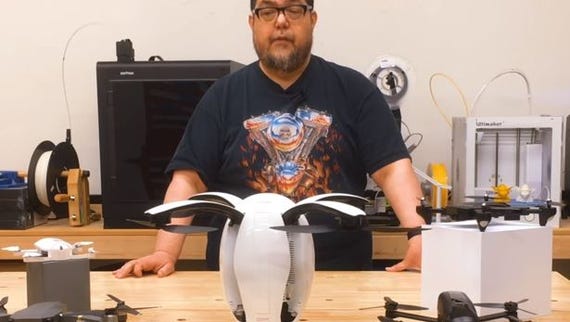 How to register your drone (step-by-step). It's the law...again!
Watch Now

The rules have changed. Instead of putting the registration number inside the battery compartment as this video shows, it must now be on the outside of the aircraft.

A little over a year ago, we reported on the FAA's new regulations for hobbyist drone operators. Hobbyists (folks flying drones non-commercially) were required to register with the FCC and place the issued registration number somewhere on the aircraft.

In the accompanying video, I explained how to get a registration number, and then I showed making a label and placing that number inside the battery compartment of my DJI Mavic drone.

Drone operators are now required to post registration numbers on the exterior body of the aircraft.

Surprisingly, the new rule does not specify where on the external body of the aircraft the registration number needs to be placed. The rule simply states that it must be visible "upon visual inspection of the aircraft's exterior."

As rules go, this isn't particularly difficult to comply with. The registration numbers need to be visible and clear. I originally generated my registration number with an old label maker I had lying around. Last year, I put the label inside the battery compartment. This year, we'll all simply need to make new labels and put them on the outside of our drones.

What is interesting is the FAA's reasoning for this new rule. According to the agency's posting of the rule change on FAA.gov:

Law enforcement officials and the FAA's interagency security partners have expressed concerns about the risk a concealed explosive device might pose to first responders upon opening a compartment to find a drone's registration number.

Protecting first responders should always be a responsibility all citizens share. Those brave individuals put their lives on the line regularly for all of us. As I mentioned above, it's certainly not a hardship to make a new label and put it outside on the aircraft.

Law enforcement officials did not specify what type of small explosive device they are concerned about, but it's possible to create havoc with small packages. What isn't clear is how external registration numbers will protect responders. Terrorists could spoof those numbers or simply register with the FAA and get their own, officially issued number.

That said, first responders usually have carefully considered reasoning, and removing any need whatsoever for a first responder or security official to open a compartment of a suspect aircraft makes good sense. With this new rule, it might be impossible to accurately identify the drone operator from what might be a spoofed registration code, but the absence of a visible registration number can serve as added cautionary evidence for the handling and processing of a suspect drone.