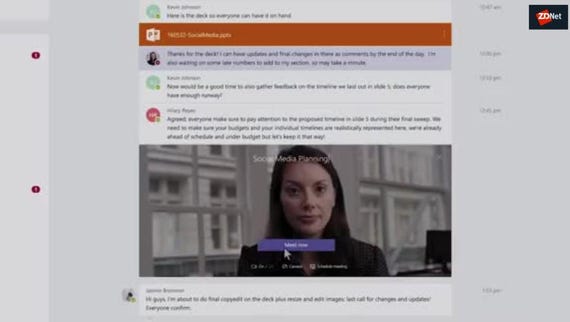 Microsoft's Teams collaboration platform has gained one more notable app in the form of Zoho's Notebook, which lets users take notes, sketch, and record information on note cards from within Teams.

Microsoft might not have a mobile platform to attract app developers, but many developers like Zoho are bringing mobile and desktop apps to its Teams platform.

The Zoho Notebook app can be installed as a tab in Teams and lets Teams users create, access and edit note cards without switching browser tabs thanks to the integration between the two apps. Users can also organize note cards by creating them and linking them with notebooks.

They can also personalize a Notebook by color-coding note cards and selecting different notebook covers, and use notes to take notes, write to-do lists, or add files and spreadsheets with notecards.

The Notebook Teams tab app permits moving and copying note cards between notebooks as well as grouping note cards into subjects like recipes, books and research.

Notebook in Teams features password protection to lock specific notes, reminder notifications for each note, and search and retrieve functionality.

Zoho is also providing special COVID-19 assistance for Microsoft customers in the form of Zoho Wallet credits worth $500. Microsoft customers need to sign up before December 31, 2020 and the credits are valid for 60 days to purchase any Zoho app or get edition upgrades.

Zoho's Teams integration and offer is the latest effort from Microsoft to support people working from home during the first and now second wave of the COVID-19 pandemic.

Microsoft made its Tasks for Teams apps for planning and managing tasks generally available earlier this month and has been busy rolling out its new Large Gallery option in Teams that supports 49 participants on a single screen.

Coming out next month is a new and improved version of Teams' AI-powered noise suppression that offers a new 'High' setting to cut background noise. It's also released handy custom backgrounds to block out disruptions from video meetings.

And last month it rolled out its Lists app, which is a 'team-based tab app' for tracking information in a spreadsheet format, but one that is designed for improved organization, collaboration, and customization.

Lists can be used for tracking patients, loans, issues, assets, routines, contacts, inventory and more thanks to its customizable views, smart rules and alerts.

Join Discussion for: New in Microsoft Teams: Now you can make...