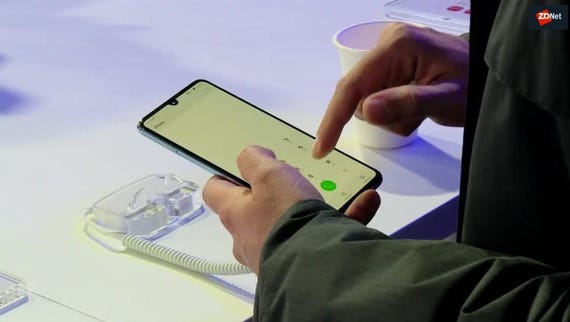 Without China's competition, the smartphone offer in the US looks bleak
Watch Now

My ZDNet colleague Jason Cipriani thinks that the base level Samsung Galaxy Note 10, which was unveiled this week, is the "Greatest $949 smartphone bargain ever."

Samsung has so many models to choose from! Note 10! The Note 10+! The $1300 Note 10+ 5G which will only work on first-generation, completely unstandardized 5G networks across immature North American networks that have spotty minimal coverage and may not even work correctly in two years' time because of evolving carrier deployments!

Wow. I don't know if I can contain my enthusiasm. By Grabthar's hammer, what a savings!

Okay, these new phones are expensive. But the $1100 Galaxy Note 10+ would seem like the flagship Android smartphone to beat this year.

The specs are indeed impressive. It has 12GB of RAM, a Qualcomm Snapdragon 855 processor, 256GB of storage, a triple camera setup including a 3D Time of Flight (ToF) range imaging sensor, and front-facing gesture recognition -- but no more iris sensor. And for that $1100, you also get a bonus MicroSD slot that the $949 entry-level model lacks, plus no headphone jack! Less is more, people!

All of this Note 10 hype sounds excellent on paper until we remember that Samsung launched the Galaxy S10/S10+ with very similar specifications to the $949 model of the Note 10 back in March. True, it doesn't have pen or pen gesture support -- but is anyone going to use that stupid feature after playing with it for the first hour?

There is so much overlap between these two product lines that it's borderline on the ridiculous. How many damn phone SKUs does Samsung need?

What other choices do we have? Well, coming in early October, or possibly even earlier, there's the Google Pixel 4/4XL, which although it hasn't been released yet, we pretty much know everything about already.

It will almost certainly have the same exact Qualcomm 855 chipset as the S10 and the Note 10, it will have multiple rear cameras, similar screen technology, and it will probably cost the same as the S10/S10+ or slightly less. And unlike the Samsung devices, it will also have a front-facing sensor array that will give it many of the same capabilities of the iPhone XS in terms of facial recognition. But most importantly, it will launch with the latest and greatest version of Android Q (10.0) out of the box.

Wow, what an array of excellent, competitively-priced smartphones we have in market leadership positions. Three vendors! Wow.

If it weren't for the fact that Huawei released its own flagship smartphone with similar features to all of these devices, the P30 Pro, just months ago, for about $200-$300 less than the Note 10, this would be important news in the Android space. But these product announcements are at best uninspiring, without much besides spec bumps and higher prices to show for another year of product development.

I don't want to pick on Samsung and Google for lacking innovation, because quite frankly, the iPhone 11 looks to be a total snoozer as well. It will very likely be missing many features that were originally expected, such as a Quantum Dot camera sensor array and onboard dedicated image processing like the Pixel 3 and Huawei P30 Pro has. But don't worry, it will make up for it with more conventional cameras, but likely not a ToF sensor like the Huawei P30 Pro and the Samsung S10 already has, and the Note 10 and Pixel 4 will. And no USB-C either, despite all our hopes that Apple would follow suit with what they did with iPad Pro.

That's the extent of it. More cameras. The only reason why I will end up picking up an iPhone 11 Max or whatever the jumbo one ends up being called is that I am on the Upgrade Program and the difference in monthly payment is likely to be negligible. But it's still a crazy expensive device, and I wish Apple had better options for price-conscious consumers.

All in all, this has shaped up to be a pretty unexciting year for smartphones. They lack significant innovation compared to the previous year, and quite frankly they all look dull and even downright ugly with the big camera bulges. And who the hell really wants to spend $1000 or more on them?

I hate to say it, but without competitive offerings from Chinese companies like Huawei -- and others such as Xiaomi and Oppo, among others that we never see in the North American market due to lack of carrier relationships here -- we are unlikely to see continued innovation from the big names like Samsung, Google, and Apple.

At least Apple has some interesting services plays they are developing and a well-integrated product and developer ecosystem that allows me to justify that premium price tag somewhat. With Android, I see none of that.

While other choices such as Motorola (Lenovo) and LG do exist, they've been performing relatively poorly in the US marketplace when you compare them against Samsung and Apple, which have 39% and 28% share of the market, respectively. LG and Motorola have 11% and 9% market share, respectively. Ankle biters.

And yes, Google's Pixel counts as an ankle biter as well, but according to recent reports, it has 43% year-over-year growth, this despite the fact that until May of this year (when Google added T-Mobile, Sprint and US Cellular to its partner list) the Pixel was tied to a single carrier relationship with Verizon and the rest of its sales are direct and carrier unlocked.

That being said, if I have to choose an Android to upgrade to, or to recommend one to friends and family, I'm going to choose a Pixel 4. Because at least with Google, there's a guaranteed and frequent software upgrade path for Android and it will always be first in line to receive them, and I don't have to contend with Samsung's bloatware. And I know the camera and imaging technology is going to be top-notch.

But overall? The current generation of phones that came out this year does not impress me. They are specced upgrades from the previous year, which are entirely meaningless in real-world use.

It's not like the apps that are running on smartphones this year are any more sophisticated than the apps that ran on them last year, or the year previous. Or even three years ago. The smartphones we have on the market now are ridiculously overpowered for the typical workloads that run on them. Faster? Sure. But fundamentally improved mobile technology over what we had two or even three years ago for the vast majority of things we typically do with these devices? Not really.

What we need are some new players on the field. Ones that are hungrier and are willing to take more risks, and are willing to price their products accordingly. But unless we see a major political shift from the current presidential administration, that is going to be very unlikely.

Enjoy your $1000-plus smartphones, folks.

Do we need more innovation in the smartphone industry or just less expensive devices? Talk Back and Let Me Know.