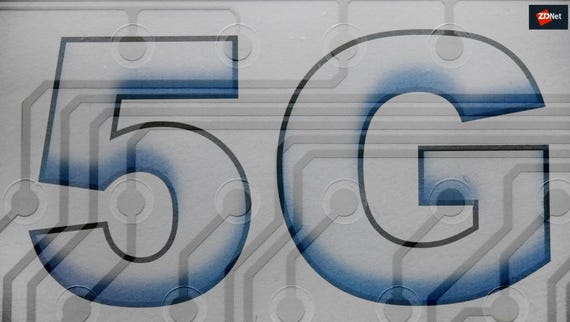 It's a bright Autumn morning and I'm standing on the roof of a medium-sized office block in central London, peering over the parapet at the people walking to work far below, unaware of the technology revolution taking place above their heads.

This roof, along with a few others across the city, is home to a test of the next generation of mobile technology: 5G.

In the last few weeks mobile operator EE has started switching on its live 5G trial sites across London. One is out to the east of the city at Canary Wharf, while there are another nine more sites -- including the one where I'm standing -- across central and east London.

EE is testing out the new infrastructure needed to deliver 5G services, which is why I'm on the top of a building wearing a bright green hi-vis jacket and looking at some very large antennas.

"There's a lot of very physical infrastructure with mobile; it feels ethereal when you're using it, but actually it's a lot of cables and a lot of steel," says Howard Jones, EE's head of network communications, as we look at the new 5G mast.

5G -- expected to arrive in the UK in 2019 -- will offer more bandwidth and lower latency, which could make virtual and augmented reality apps (like smart glasses that can deliver live information about the world around you) more practical than today's jerky and nausea-inducing solutions. 5G's capability to allow many more devices to connect to mobile networks could also give the Internet of Things (IoT) a boost; research from O2, for example, envisages the arrival of smart dustbins that will help cut council tax bills, and 5G-powered predictive maintenance on the railways that could save commuters from delays.

But most in the industry think that, at least in the short term, it will mostly be used to help cope with the massive ongoing demand for mobile data, which increases at around 50 percent per year. Handsets that support 5G won't be widely available until the middle of 2019 at least.

EE's trial will see 5G switched on at another nine sites around East London, including City Road, Old Street, Hoxton Square, St Paul's and Chiswell Street. Five small businesses and five homes will have the chance to get connected to the unique 5G launch to trial the new technology, using prototype 5G broadband devices.

The 5G antenna is broadcasting, but you won't be able to pick up a signal, simply because there aren't any smartphones that can use a 5G signal yet. EE is using the trial to understand the antenna's coverage in a complicated geography like central London, and testing it with a 5G router to create a wi-fi signal. The other part of the trial is about understanding what it's like to build 5G infrastructure: with 18,500 towers across the UK, planning, access to sites and reinforcing the structures that hold the masts is a big job.

"The more important part of the trial is what was the build process is like -- what does it entail to build a 5G network versus our experience of building a 4G network?" says Jones. "We've got a new set of physical challenges which we didn't have with 4G," he says, largely because the 5G masts are heavier and have a lot more power to manage.

Rooftop sites often need significant strengthening to carry the new 50kg 5G antennas -- and some sites house three of these; the level of upgrade work required can cause delays in obtaining planning permission, and can necessitate repeat visits, which means multiple access requests to landlords. Meanwhile, the location for 5G antennas can depend on the need to stay below regulated power output levels.

EE will be working with small businesses in the coverage area to see if they want to use the 5G signal as their broadband for a period of time, testing out how they use it as a business. This will help EE to understand how 5G performs when lots of devices are connecting, or when workers are sharing big files.

EE has already announced plans to offer some 5G services in busy areas at some point next year, including Hyde Park in London, Manchester Arena, Belfast City Airport, the Welsh Assembly, Edinburgh Waverley train station and Birmingham's Bullring. EE said it will also be offering some 5G services in Glasgow, Newcastle, Liverpool, Leeds, Hull, Sheffield, Nottingham, Leicester, Coventry and Bristol. It's basically starting its roll-out in areas where there is highest demand for data, finding the busiest 4G sites and adding 5G on top.

"Then you know you are going to be servicing the greatest number of people with the greatest data demand" says Jones.

EE is hardly alone in testing out 5G in the UK; O2 has been testing out some 5G technologies at The O2 arena in London, using the network to test equipment and potential use cases for 5G. In September, O2 made its first data test call at The O2 using Mobile Edge Computing, and said this will pave the way for further tests at the venue to demonstrate the potential of 5G technology. O2 said it's also working with a number of FTSE 100 businesses to run trials to understand where 5G can benefit them.

Meanwhile,Vodafone is testing out what it calls 'full 5G' from a site in Salford, Greater Manchester. The antenna, transmission network and network core have all been upgraded to support 5G, the company said. Vodafone has also conducted the UK's first 'holographic call' using 5G spectrum from its Manchester office. It said it plans to go live with 5G trials in Birmingham, Bristol, Cardiff, Glasgow, Liverpool and London throughout the rest of this year and is discussing trials of augmented and virtual reality in offices, factories and hospitals with large customers. Three has announced plans to spend £2bn on setting up the infrastructure for its 5G network roll-out.

5G is expected to arrive in some UK cities next year, but it could be a lot longer -- five years or more -- before it reaches even half of the country (and don't forget, there are plenty of areas still waiting for 4G to arrive). So although trials are starting now, it may be a while before we all see the benefits of the new technology.

Join Discussion for: On a roof, inside London's 5G mobile trial