Onyx says it is the only company that makes E Ink devices with screen sizes ranging from six inches to 13 inches. I was recently sent its latest offerings, the 13.3-inch Boox Max Lumi2 and the smaller 10.3-inch Boox Note Air2. There are some shared characteristics, including the ability to function both as an e-reader and as a content creation device. Also, both devices deploy the same Android 11 operating system and user interface, and both use the same stylus.

Using E Ink devices for content creation is not as rare as it once was. E-reader specialist Kobo launched its Elipsa earlier this year, for example, while reMarkable is on the second version of its tablet, the reMarkable 2.

Onyx devices are available direct online, where the Onyx Boox Max Lumi2 costs $879.99 and Boox Note Air2 costs $499.99. Both come with a sleeve and set of five stylus tips. In the UK, I found the devices without the bundled accessories at Amazon for £799.99 and £499.99 respectively. 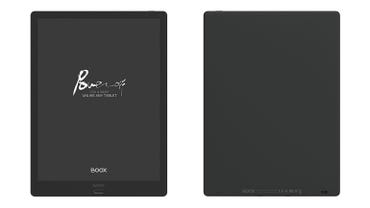 Both tablets have a similar user interface and mode of operation, with finger sweeps and taps supported as well as stylus input. The larger Max Lumi2 has a fingerprint scanner below the screen; this is absent in the smaller Note Air2 model, although both devices can be password protected.

The Boox devices provide access to a library of books, but it's a pretty feeble collection of public domain works. However, e-book fans should not despair. Both devices run on a version of Android 11, which means there's Play Store access to e-book reading options such as the Kindle and Kobo readers, as well as Google Play Books, Audible and Libby (used by my own public library service and many others). There are also news apps from The Guardian, the BBC, The Economist, The New York Times and more.

A USB-C connection to a computer allows content to be copied to a Boox device, and I found that worked very smoothly. Alternatively you can use BooxDrop, a QR-code based system that allows wireless content transfer to a Boox. It's a little convoluted, but it does work and supports file sharing from laptop, phone or tablet. Further data sharing comes via OneNote, Dropbox and Evernote, as well as the 5GB of provided cloud storage per Boox device, with login via the device's settings area. With many document formats supported, you should be able to access what you need.

There is a version of Chrome on board, and while this obviously renders web pages in monochrome, it functions quite well.

When it comes to data entry the ridged stylus is easy to hold, making it comfortable to create or edit/annotate existing documents. The smaller Note Air2 has a marked spot along one long edge where the stylus can be held by a magnet. I could not find a similar spot on the larger Max Lumi2, although its stylus has the same marking.

Original content is placed into templates. Blank portrait and landscape templates are included, users can create their own (these are stored under a tab labelled 'local'), and further designs can be download. There are plenty of drawing tools, and several different brush and pen styles can be configured and switched between by tapping at a menu at the top of the screen. This is ideal for creating art projects, schematic drawings, flowcharts and the like.

Both the Max Lumi2 and the Note Air2 have microphones and speakers, and recordings can be added into notes. Handwriting recognition is included: it's a bit slow, but if you write fairly neatly it works well enough.

The user interface is fairly easy to navigate, although you'll need to familiarise yourself with various menus dotted around the workspace, and there's a 'navigation ball' to master. This can be called up at any time, with nine configurable pop-out buttons providing quick access to your most frequently used functions.

The build of both devices is solid, and each feels well weighted given its size. The smaller Note Air2 has a nicer design, with its blue and orange colour scheme adding a certain panache. The larger Max Lumi2 is rather less interesting to look at, which is a shame.

Onyx has done well to deliver a rounded user experience that caters for document creation and annotation, while also supporting e-book reading via both the two most popular formats Kindle and Kobo, and a popular public library format in Libby. Synchronisation across devices should mean a seamless experience for fans of the two proprietary formats and the public library loans system.

Onyx Boox devices will inevitably be something extra to carry rather than a replacement for your existing phone, tablet or laptop. There are certainly situations where they can add value -- but which form factor is the best fit?

There are several factors to weigh up. The smaller Note Air2 is easier to tote and considerably cheaper, while the larger and more expensive Max Lumi2 offers more storage space and longer battery life. I also found using the split-screen feature easier on the larger screen. That said, the Max Lumi2's footprint is almost identical to that of my laptop.

Whichever device you choose, Onyx will deliver a capable E Ink tablet suitable for creating as well as consuming content.